For decades, there were several clear distinctions between college and professional football. The play and pay were much better in the NFL than the NCAA. But now you have pro coaches poaching plays from college, and the top-tier college coaches make almost as much money as their professional peers. It’s still more glamorous to win a Super Bowl than the national championship. But the cultural and economic gaps are indeed closing, as you’ll see from this list of the highest paid NCAA football coaches. 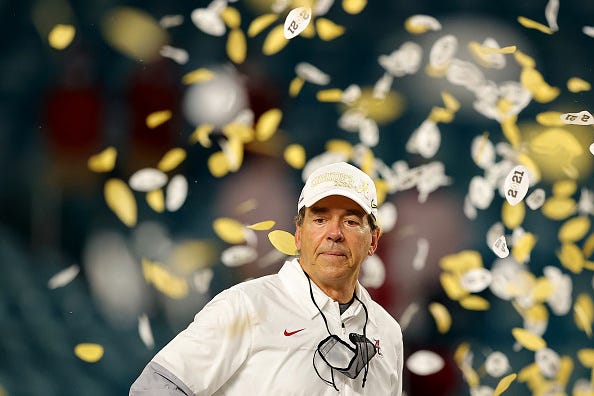 It's good to be the king. By leading Alabama to a rout over Ohio State in the national championship game, Saban now has seven - yes, seven - national titles to his name, the most by any head coach in the history of college football. Six of them came with Alabama, while his first one came when he coached LSU to the 2003 championship. 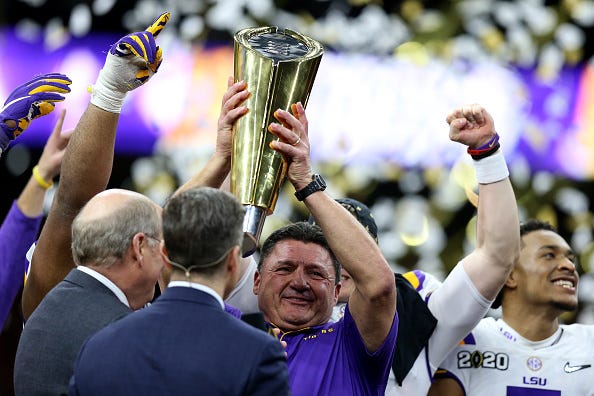 Two years ago, Orgeron coached what some say is the greatest team in college football history. The 2019 LSU Tigers are the only team to finish 15-0, whipping powerhouse Clemson in the title game.

LSU's quarterback, Joe Burrow, won the Heisman Trophy and was on his way to NFL Rookie of the Year before he got hurt. Halfback Clyde Edwards-Helaire produced immediately for NFL juggernaut Kansas City Chiefs. Wide receiver Justin Jefferson was easily the best rookie wideout in the NFL last year while linebacker Patrick Queen has been quite impressive for the Baltimore Ravens, finishing third in the vote for the NFL's Defensive Rookie of the Year.

In the 2020 NFL Draft, there were a record-tying 14 Tigers taken and an astonishing 20 total players from the 2019 LSU Tigers - recruited and coached by Ed Orgeron - agreed to NFL contracts. That's how a coach gets paid $8.7 million. 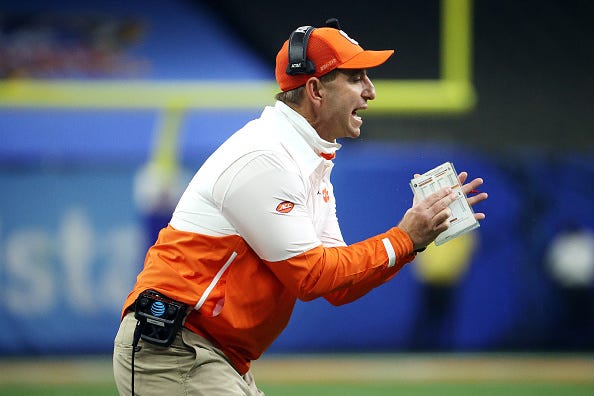 Sensing a theme here? Teams in the south tend to dominate. The region produces the best football players, which leads schools to invest heavily in their football programs, which attracts the best coaches, who recruit those great players, keeping them from fleeing to Texas or USC or OSU.

Swinney is a perfect example of a Southern boy done good. He wasn't much of a player, but worked hard enough to become a walk-on at — you guessed it — Alabama, where he later became a graduate assistant and position coach. He then moved on to Clemson as an assistant, then got his big break at head coach and never looked back.

Swinney is not only an incredible recruiter and coach, but he's also the only coach who beats Saban's Alabama behemoth with any frequency, toppling them twice in the national championship game. That's how you get paid $8.3 million. 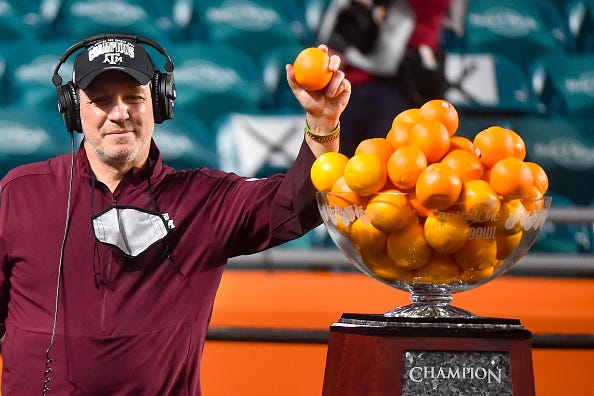 Fisher got his money for what he did at Florida State: when he won a national title with Jameis Winston at quarterback. FSU lost in the playoffs the next year and the football program began to fall apart. Just three years after going a combined 27-1 in 2013-2014, Fisher was gone.

This is a fairly common, if not seedy, part of college football business. Players have to jump through flaming hoops just to change schools, but coaches can walk out on their teams, schools and the kids to whom they preached loyalty for the first team that offers a fatter check. Fisher is a fine football coach and they do say a person is worth whatever someone is willing to pay them. 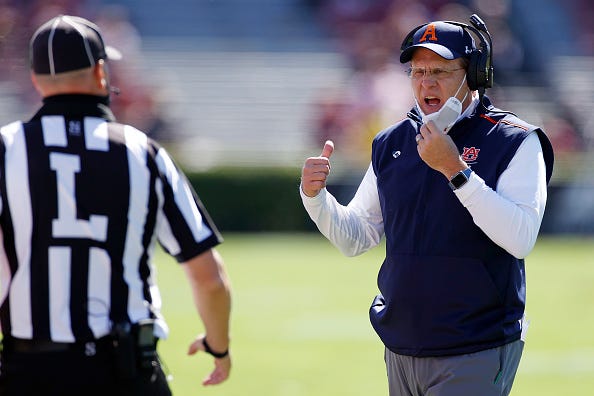 Malzahn was fired on December 13, 2020 because — surprise, surprise! — he didn't win enough. The school still owes him about $21 million, because coaches get guaranteed contracts. Coaching a college football team in the south is like coaching in the NFL. Your job security is about as strong as last year's record. Auburn, who plays in the same conference (SEC) as Alabama and LSU, just went 6-4. No bueno. 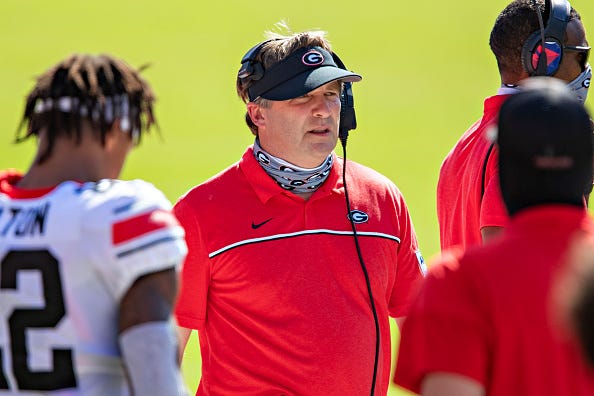 Not shocking to hear that Smart is a former assistant under Saban at Alabama. In almost no time, he's built the Bulldogs into a perennial power. In just his second year he led the 'Dawgs to the national title game, which they were leading until a QB named Tua led Alabama back in the second half. Smart has won nearly 80% of his regular season contests and is 4-2 in bowl games. The only thing he's missing is a national title — a brutal task for coaches from the SEC, where they play the hardest schedules in the sport. 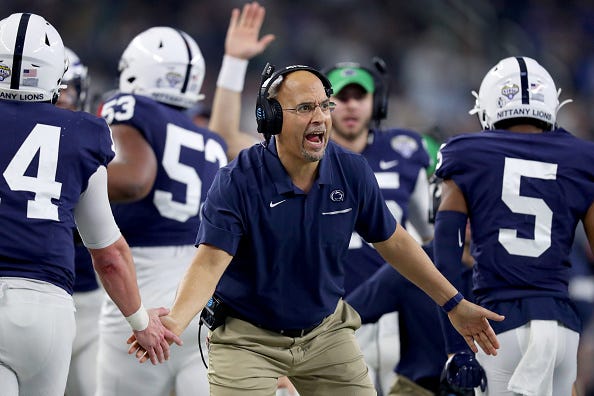 Franklin has done a fine job for a school some of us think should have been vaporized years ago. After the horrific revelations of rampant child abuse by Jerry Sandusky — and the realization that, at best, Joe Paterno ignored it — Penn State needed a few years before top-flight recruits would consider them again. Bill O'Brien kick-started the recovery and now Franklin has the Nittany Lions contending in the Big Ten and once again feasting on the fertile Pennsylvania soil for high school talent. 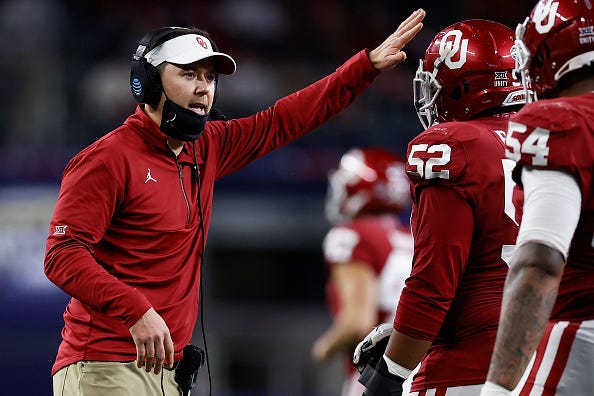 The wunderkind of college football took over Oklahoma at 33 years old, and has actually been better than his boss, mentor and predecessor, Bob Stoops. Riley has only been the Sooners' head coach for four years; in his first three he led the team to a 12-1 record, a top-four ranking and a place in the college football playoffs. Though he hasn't won the whole thing (yet), it's still an epic accomplishment. In fact, Riley is so good — he produced back-to-back Heisman winners in Baker Mayfield and Kyler Murray — that almost any other team would offer quite a raise for his services and it's likely that half the NFL's 32 teams would hire him tomorrow. 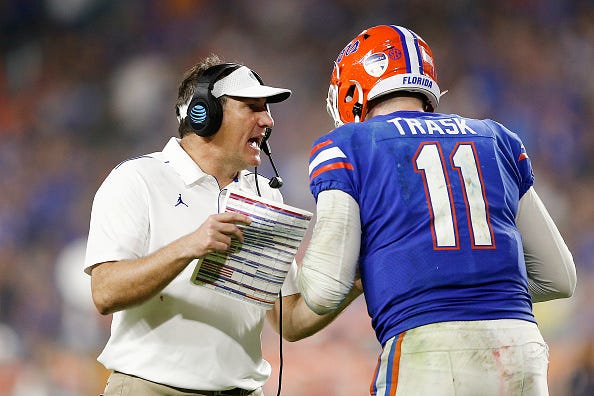 This is pretty much what the Florida football coach gets paid. Mullen did pretty well his first two seasons, winning at least 10 games and a bowl game — the standard in the Southeastern Conference (SEC). But Mullen's Gators went a mere 8-4 last season and got crushed in the Cotton Bowl by Oklahoma, a team coached by the aforementioned Riley. It's fair to say four-loss seasons are unacceptable in the SEC. Mullen, who coached Mississippi State for nine years, surely knows that.