Given the success that he had as the head football coach at both Temple and Baylor, Matt Rhule could have stayed in the college ranks and attempted to be one of this era's most dominant NCAAF coaches.

Instead, the 45-year-old agreed to a deal to become the next head coach of the Carolina Panthers, hoping that the success he has at the collegiate level is able to translate to Sundays. Of course, the massive seven-year/$62 million deal that the Panthers handed him gave him a ton of security at the next level. It also assured that if Rhule isn't successful as an NFL head coach and eventually is left to return to coaching in college, he'll be much wealthier for having tried his hand at the sport's highest level.

Of the 12 wealthiest current or former college football coaches, six have been or currently are head coaches at the NFL level. Even if they weren't especially successful at the NFL level or wore out their welcome, it still raised their national profile and made them more intriguing candidates to hire (and pay) when they were ready to return to the college level.

Courtesy of Celebrity Net Worth, here's a look at the 12 richest living college football coaches, a list that features a heavy NFL influence: 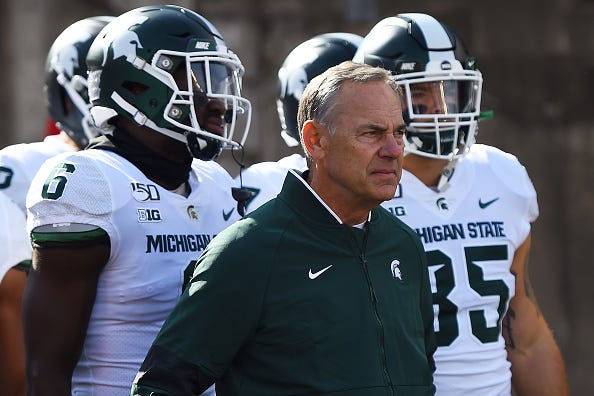 With an investigation into purported NCAA rules violations looming, Dantonio resigned as the head coach of Michigan State in February of 2020. After coaching future NFL stars like Brent Celek at Cincinnati from 2004-2006, Dantonio was hired to be Michigan State's head coach, a position he held for 13 seasons. In 16 seasons as an NCAA head coach, Dantonio led his teams to a 132-74 record. He also waited to resign at Michigan State until after Michigan State University paid him a longevity bonus, as noted by Ben Kercheval and Barrett Sallee of CBS Sports. 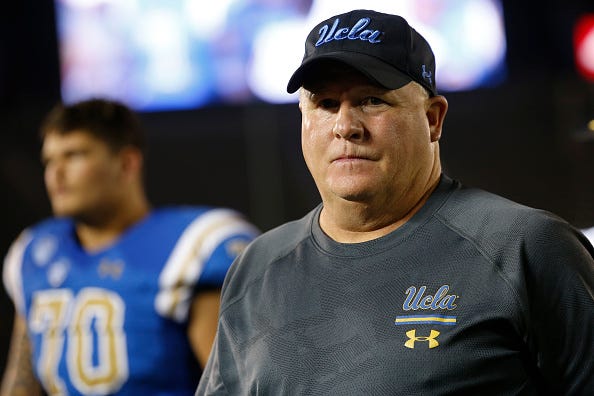 Once a gym teacher, Kelly has had a pretty wild coaching journey. After revolutionizing the college game in four seasons as Oregon's head coach, Kelly became the head coach of the Philadelphia Eagles in 2013. Despite some initial success, Kelly made a lot of enemies in Philly and was fired before completing his third season. He landed on his feet as the San Francisco 49ers' head coach in 2016, but a roster that was devoid of talent went just 2-14 and he was fired. After a year of working at ESPN, Kelly returned to the college ranks with UCLA, signing a five-year/$23.3 million deal. UCLA is 7-17 in two seasons under Kelly. 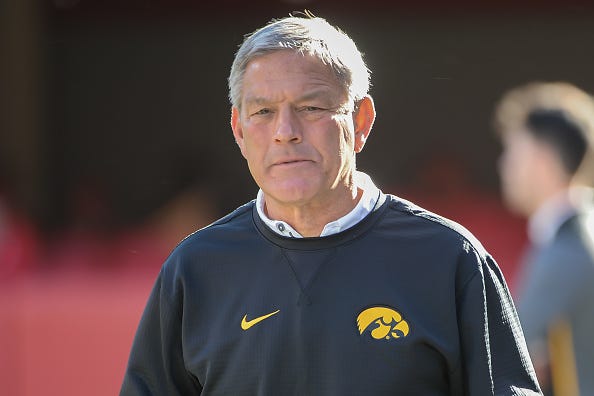 He's perhaps overshadowed at times because the Big 10 includes Ohio State, Michigan, Michigan State and Penn State, but Ferentz has a .609 winning percentage in 21 seasons as the head coach at Iowa. In September of 2016, Ferentz agreed to a contract that would pay him $4.5 million a year through the 2025 season. 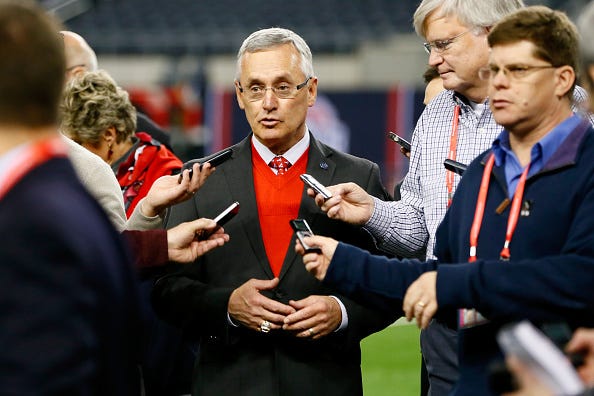 Tressel, 67, hasn't coached since the 2010 season after he resigned due to an NCAA rules violation scandal. Still, in a decade as Ohio State's head coach, Tressel and his sweater vests were extremely successful, going 106-22, winning six Big 10 titles and the 2002 BCS National Championship. Since May of 2014, Tressel has been the president at Youngstown State University, where he won four 1-AA titles as a football coach before his tenure at Ohio State. 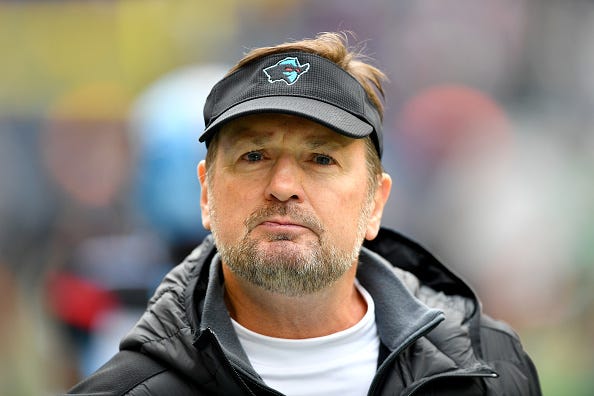 Stoops was one of the most successful college football coaches of his era, going 190-48 in 18 seasons at Oklahoma's head coach, leading the team to the BCS National Championship in 2000. Stoops curiously retired from coaching college football after the 2016 season, later citing the rigors of the job as the reason he left. Still just 59, Stoops was the head coach and general manager of the XFL's Dallas Renegades before COVID-19 forced the league to suspend and ultimately cancel its season, guiding the team to a 2-3 record. 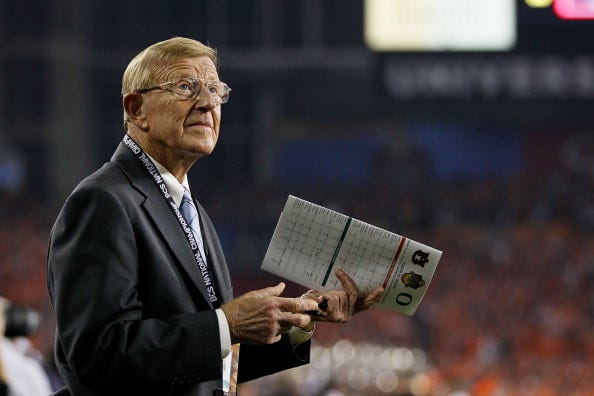 Holtz was a head coach at the collegiate level for 33 years, most notably serving as Notre Dame's head coach from 1986-1996. He also coached the New York Jets in 1976, but was unsuccessful, with the team going just 3-10. He's been a part of writing 10 separate books, and was an analyst for both CBS and ESPN, with his ESPN stint lasting from 2004-2014. 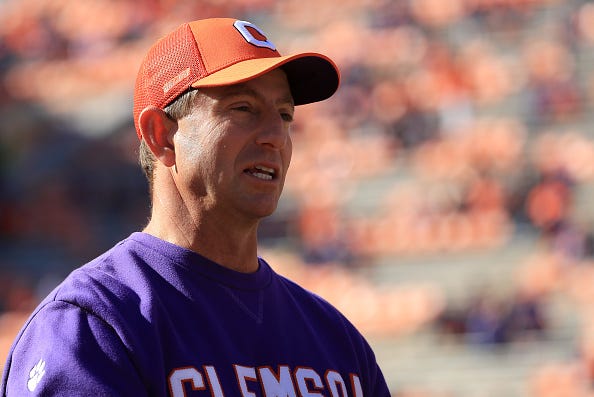 An outspoken critic of players being paid at the NCAA level, Swinney agreed to a 10-year/$93 million extension through the 2028 season with Clemson University in 2019. In 12 years as Clemson's head coach, Swinney has built a powerhouse, as the Tigers have gone 130-31, winning the College Football Playoff National Championship in 2016 and 2018, and appearing in the game in 2015 and 2019 as well. Swinney is only 50 years old, meaning he has a chance to become one of the most successful (and profitable) coaches in college football history. 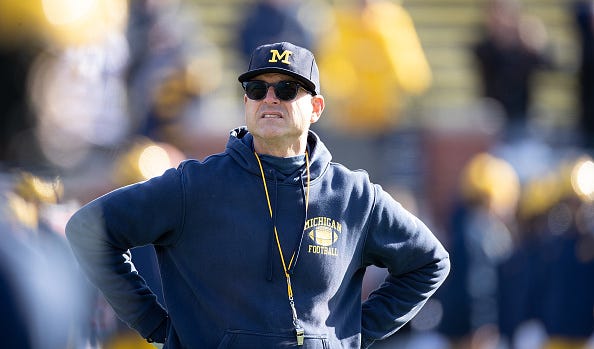 Everywhere that Harbaugh has coached at, he's had success. Stanford, far from a traditional college football powerhouse, went 12-1 in 2010, his final season there before heading to the NFL. Though he may have had a shelf life in the NFL, the San Francisco 49ers were tremendously successful during his time there, going 44-19-1 and appearing in Super Bowl XLVII. Even though some feel his time at Michigan has been relatively underwhelming thus far because of a lack of success against Ohio State, Harbaugh has led the Wolverines to a 47-18 record in five seasons. Of course, the 56-year-old was also a quarterback in the NFL for 13 seasons, playing for the Chicago Bears, Indianapolis Colts, Baltimore Ravens and San Diego Chargers after his collegiate career at Michigan. 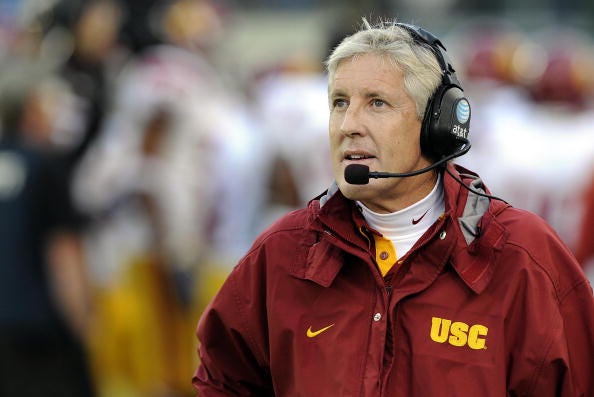 Given that he's been the head coach of the Seattle Seahawks since 2010 and is likely going to be a Pro Football Hall of Famer some day, it may seem strange to think of Carroll as a college football coach still. However, in between stints in the NFL, Carroll built a powerhouse at USC, most notably coaching Carson Palmer, Matt Leinart and Reggie Bush in a nine-year stint as the university's head coach. Carroll posted a staggering 97-19 record in nine seasons at USC, guiding the team to National Championships in 2003 and 2004. Right as the university was about to bear the brunt of an NCAA infractions scandal, Carroll returned to the NFL. 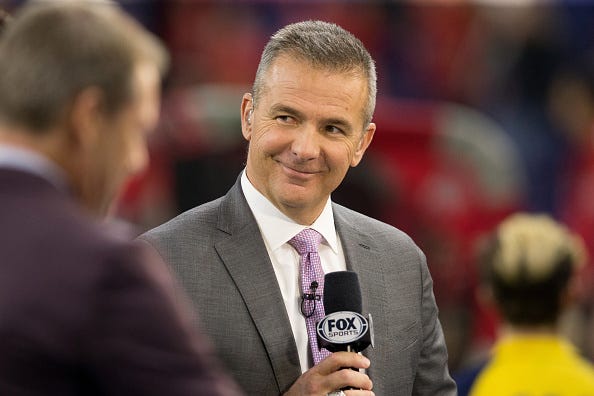 Wherever Meyer has coached, he's had tremendous success, going 187-32 in 17-season coaching career that has included stops at Bowling Green, Utah, Florida and Ohio State. He worked at ESPN in between his tenures at Florida and Ohio State and has worked for FOX Sports since leaving Ohio State after the 2018 season. Given that he's still only 55, there will continue to be speculation that Meyer, who won National Championships at both Florida and Ohio State, will return to coaching in some form, whether that's at the collegiate level or finally trying his hand in the NFL. 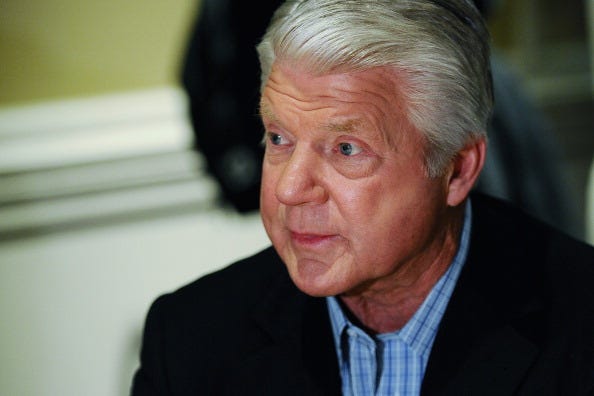 Before he led the Dallas Cowboys to two Super Bowl titles, Johnson helped turned University of Miami into "The U." Johnson coached at Miami from 1984-1988, leading the team to a 52-9 record. Johnson coached Michael Irvin, Jerome Brown, Cortez Kennedy and Vinny Testaverde during an illustrious five-season stint at Miami. Johnson has been part of FOX NFL Sunday for two decades. 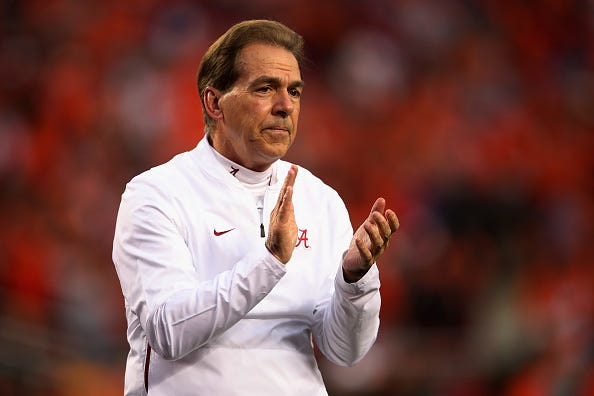 Arguably the greatest coach in college football history, Saban signed an eight-year/$74 million deal to remain at Alabama in July of 2018. Alabama has gone 157-23 in 13 seasons under Saban's tutelage, winning five National Championships over that period. Saban also has had college stops at Toldeo, Michigan State and LSU, leading LSU to a National Title in 2003. While the 68-year-old hasn't found much success at the NFL level, he's had two notable stops. From 1991-1994, he was Bill Belichick's defensive coordinator for the Cleveland Browns. He was the Miami Dolphins' head coach in 2006 and 2007, with the team going 15-17, and notably passing on signing Drew Brees before the 2006 season because of medical concerns. Saban is also currently a spokesman for Aflac.