Jim Harbaugh and the Wolverines walked off the field after the first two quarters against Wisconsin last weekend trailing 28-0 -- their largest halftime deficit in the history of Michigan Stadium.

They went on to lose 49-11 -- their most lopsided defeat since 1940 and their second worst defeat ever.

For a program of Michigan's stature, led by the fourth highest-paid coach in the country, one might call this an embarrassment. Not Harbaugh, who says his team just needs to "get back to work."

"We’re not going to slow down, we’re never going to stop and we’re not going to feel sorry for ourselves. And I don’t think there’s anything to be embarrassed about," Harbaugh told the Stoney and Jansen Show. "You just keep pushing forward. There’s some people who think athletic greatness is defined by perfection -- it’s not. It’s defined by overcoming obstacles and adversity."

For Michigan, one obstacle is an apparent lack of talent. The Wolverines were missing several starters against Wisconsin, but they don't have enough playmakers when healthy to keep up with the best teams in the Big Ten.

"I think we do, I think we have the talent," Harbaugh said. "Some guys that were maybe not expected to play as much or as have as big of a role, find themselves in that role. And some are playing pretty good -- pretty darn good -- and will get even better. Some good snaps, have earned more time." 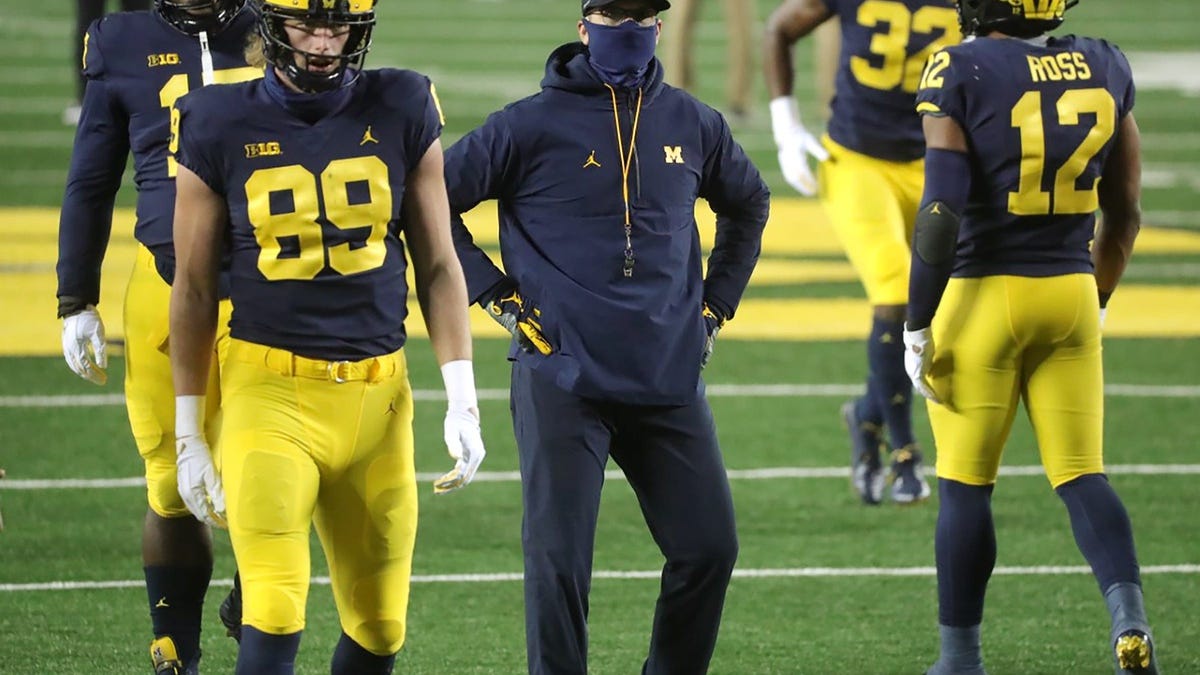 Pat Caputo: Jim Harbaugh has morphed into a disaster for Michigan

These are uncertain times for Harbaugh. His contract is up at Michigan after next season, and talks on an extension have seemingly stalled. There's increasing speculation that the two sides might part ways this offseason in an 'amicable divorce.'

For the purposes of recruiting, Michigan can't possibly retain Harbaugh as a lame-duck coach. He's the only Power Five coach with less than two years remaining on his deal. So either he gets an extension in the next few months or he departs altogether.

Does he still want to coach next season, with or without an extension?

"As I said, this is life-giving energy to me. Coming back, attacking this week, this is what I live for," Harbaugh said.

With each loss, the outside noise grows louder. Nationally and locally, Harbaugh is losing support. The growing consensus is that it's time for Michigan to move on.

Asked how he handles his critics, Harbaugh said, "That just depends on your interest and your willingness to listen to what they say. My interest is high in coaching this football team and doing everything possible to lead them and be their coach."

The Wolverines should get back on track this weekend with a trip to Rutgers. They close out the season with Penn State, Maryland and Ohio State. That 1967 team that also started 1-3 finished with four wins, and the head coach was gone a year later -- replaced by the legendary Bo Schembechler.

If a similar fate doesn't away this team and this coach, they better change the story soon.

"Every week, whether you win or lose, you go right to work on what you can improve. It’s always that process, and been at it pretty darn hard. Going to continue to do so," Harbaugh said. "There’s a great faith over here on this team that we’ll find a way."