For the second consecutive week, Alabama suffered another brutal blow to its College Football Playoff hopes, this time in the form of a season-ending injury to quarterback Tua Tagovailoa.

His injury could have a ripple effect across the college football landscape. Alabama will now need to defeat an Auburn team which boasts a stingy defense behind sophomore quarterback Mac Jones in two weeks in order to have any sort of hope at reaching the College Football Playoff.

LSU took care of business on Saturday, defeating Ole Miss 58-37 to improve to 10-0 on the season and have established itself as the best team in college football. The Tigers have two winnable games left on the schedule against Arkansas and Texas A&M before heading to the SEC Championship, which will be against Georgia. If LSU wins out, they will likely be the overall No. 1 seed, while a loss in the SEC Championship game would probably only affect their seeding. 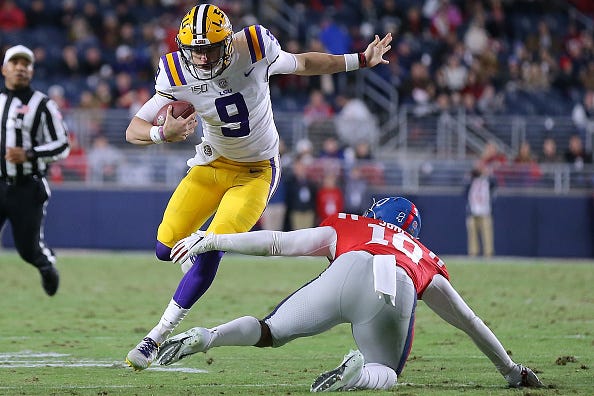 The Buckeyes took care of business against Rutgers and will be getting star defensive end and Heisman Trophy candidate Chase Young back for its final two games — which will be no easy tasks. Ohio State clashes with No. 9 Penn State next week which could determine who plays in the Big Ten championship game out of the East. Ohio State follows that game with its rivalry matchup against Michigan — whom has not been able to beat the Buckeyes since Jim Harbaugh took over. It is a tough schedule to close out the season, but Ohio State has looked like the best team in the country at times and with Young back they should be in good position to continue its undefeated season.

Clemson has fallen from its No. 1 ranking at the start of the season despite not losing any games. The Tigers have a week off before they close out the season against South Carolina, who upset Georgia earlier this year. Trevor Lawrence seems to be peaking at the right time, though. He has completed 77 percent of his passes over the last four weeks, averaging 260 yards per game and has 13 touchdowns with no interceptions. Clemson is likely locked in at the No. 3 seed unless Ohio State should falter over the next few weeks.

The Bulldogs earned another impressive win over Auburn on Saturday, but it feels like their only hope at making the College Football Playoff is to win out, and that includes a victory over LSU in the SEC Championship game. No one should count Georgia out of that game, though. Despite losing to South Carolina, Georgia has impressive wins over Notre Dame, Florida and Auburn. The team has also played in the game the last two years, and Jake Fromm won the game as a freshman against Auburn in 2017, so he has experience in those big games. 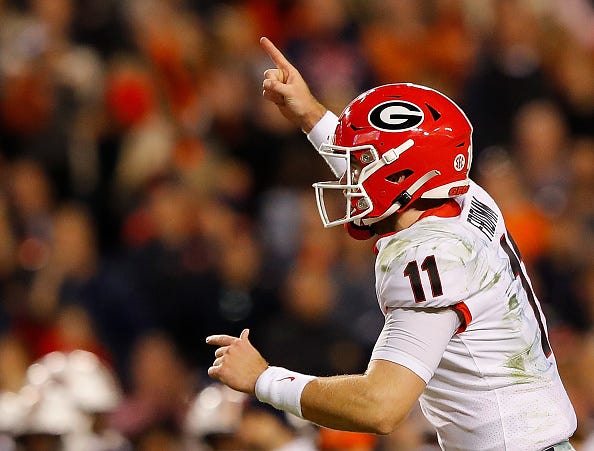 Keep an eye on:

This is where Tagovailoa’s injury comes into play. Should Georgia lose the SEC Championship game, Alabama would likely take this spot as a one-loss team. However, there is a solid chance Alabama falls to Auburn, which creates an opening for the Ducks. Oregon has been the best team in the Pac-12 and its only loss was a 27-21 heartbreaker to Auburn in the season-opener, which was decided on the final play of the game. Oregon should like where it stands at the moment.

The Sooners pulled off an incredible win over Baylor, rallying from a 28-3 deficit for a 34-31 victory on Saturday, but the committee has not been kind to Oklahoma this season. The Big 12 powerhouse has the best offense in the nation, but the lack of defense in the conference is often used against them. Oklahoma is going to need losses from both Alabama and Georgia and show enough on defense for the committee to give them an edge over Oregon or a two-loss Georgia team. It may be too little too late for that.

Things do not look good for Alabama right now, but only a fool would dismiss this team. Sure, the Crimson Tide has their work cut out for them. They would need to beat Auburn with Mac Jones under center then need Georgia to lose in the SEC Championship game. If those things happen, then the committee would have to decide if Alabama is a better fit for the final spot than a one-loss Oregon or Oklahoma team. Plenty must go their way, but it is still too early to count them out just yet.