San Francisco -- 49ers running back Raheem Mostert will undergo surgery on his injured knee and will now miss the rest of the season after coach Kyle Shanahan announced Monday that he'd miss at least the next eight weeks.

Mostert posted a message on social media to announce his decision to have the season-ending procedure.

"After consulting with multiple doctors and weighing my options, I will be having season-ending surgery to repair my knee.

"This gives me, without a doubt in my mind, the best possibility at coming back 110%. I have always come back stronger and I will this time too! I have faith in myself, my doctors, my support system, my team, and God. He makes no mistakes!!!

"I'm gutted. This sucks! This is obviously not what I worked so hard for. I wish more than anything I could be out there on the field with my brothers!!!

"Thank you for your support in our decision. I'm far from done!"

The 29-year-old left the game in the first quarter against Detroit and a subsequent MRI determined that he had chipped cartilage in his knee. He'll be placed on injured reserve.

In Mostert's place, 2021 sixth-round pick Elijah Mitchell carried the load in Week 1 and rushed 19 times for 104 yards after Trey Sermon was a surprise inactive for the game. Jamycal Hasty scored from three yards out on his only rush attempt.

Buy everything you need for a great pregame tailgate party here

Mostert appeared in just eight games last season after suffering knee and ankle injuries. He missed the final seven games of the 2018 season after fracturing his right arm, and a knee sprain forced him to miss five games in 2017. 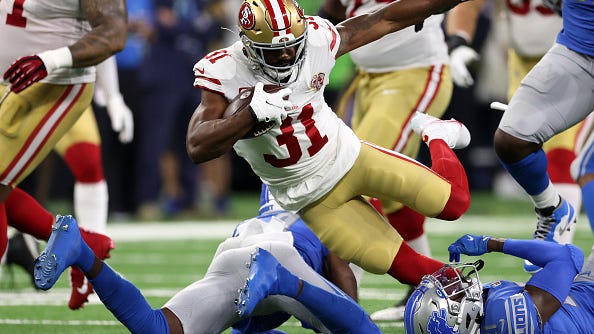