Aaron Rodgers looked far from the reigning NFL MVP in the 38-3 thrashing that the New Orleans Saints handed him and the Green Bay Packers on Sunday.

The 37-year-old quarterback threw two interceptions and failed to find the end zone in a dreadful performance as the Saints defense shut him down.

Earlier this week, Rodgers went onto “The Pat McAfee Show” to discuss the game and said he had a pretty good excuse for the first pick he threw in the third quarter.

“I don’t like to make a lot of excuses for interceptions,” Rodgers said. “…That [first interception] was entirely due to the double nut shot I took.”

Rodgers, who was facing a second-and-7 from the Saints’ 9-yard line, was under pressure from Christian Ringo and Cameron Jordan as the two Saints defensive linemen converged to hit Rodgers — apparently where the sun don’t shine — right before he got rid of the ball.

Rodgers tried to find Davante Adams but instead it was Saints rookie Paulson Adebo who caught the ball and returned it to 31 yards to the Saints 40-yard line.

Green Bay was trailing 17-3 at the moment and was in position to make it a one-score game, which would have certainly changed the trajectory of the game. 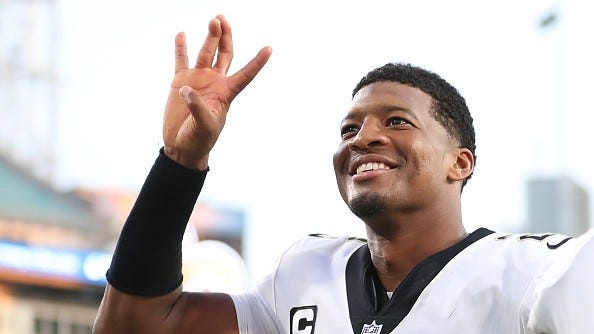 Manic Monday, Week 1: Dak is back, Jameis' middle finger to the haters and more