Like everyone coping with the coronavirus crisis, Aaron Rodgers was having an unusual offseason -- and that was before the Packers went out and drafted his potential replacement in the first round.

Speaking extensively to reporters for the first time since the Packers drafted Utah State QB Jordan Love with the 26th pick last month, Rodgers suggested he's not a big fan of stay-at-home orders prompted by the coronavirus crisis. 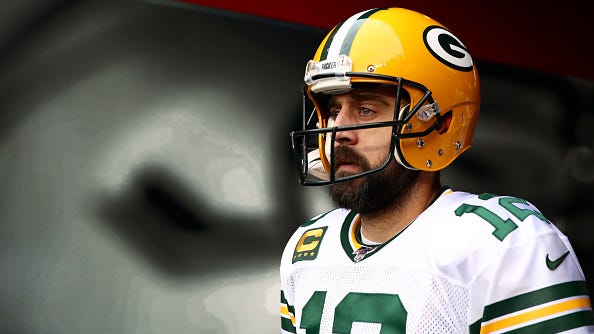 Aaron Rodgers Says He Wasn’t Thrilled by Jordan Love Pick, but Understands It

While discussing Love's arrival in Green Bay during the conference call, Rodgers was asked his feelings on whether it's safe to play in 2020.

“Yeah that’s a good question. Like many of us, and I’ve seen a lot of comments on this, and obviously my story coming back from Peru before the country kind of went into a lockdown, I think we all were buying into the idea of quarantine to flatten the curve."

The 36-year-old quarterback was referring to his reported March vacation to Peru, where he said he just narrowly escaped before foul weather and a looming travel ban could have kept him there for weeks longer than expected.

“I think there are a lot of questions now that it’s more of a house arrest, to find a cure with people wondering what exactly that means as far as the future of the country and the freedoms we are allowed to have at this point.”

The choice of the phrase "house arrest" seemed to echo the language of those calling for an end to the lockdown orders, and a return to reopening of shuttered sectors of the economy.

Rodgers cited Depression-era unemployment figures and a recent surge in calls to suicide hotlines, and said sports can unify a country struggling with the crisis.

“I think sports has always been something that’s brought people together. I’m very hopeful that we can have a season. I think the important thing to think about, though which is more important than that is the state of the country and the fact that we have 36-plus million people on unemployment right now. You have rising poverty levels to go along with the unemployment. You have suicide hotline is up 8,000 percent.

The 15-year veteran appeared to suggest that the response to the public health crisis has been more problematic than the disease itself.

“There’s a lot of problems going on in the country right now associated with the fear around this pandemic. I hope that we can use some common sense moving forward and make decisions that are going to be in the best interests of all people moving forward, and I hope that sports is a part of that at some point.”