When Archie Manning woke up Monday morning, mere hours after his son, Peyton, was enshrined in the pro football hall of fame, he had some text messages to go through.

223 text messages, to be specific.

Some of those text messages suggested Peyton should consider going into politics, Archie shared on SportsTalk with Bobby Hebert, Kristian Garic and Mike Detillier. But one message stood out, suggesting Peyton would make a good NFL Commissioner. That text was from famed coach and broadcaster John Madden.

“I was honored Peyton asked me to be his presenter," Archie said. "It was a great class. I was very proud. It was a wonderful night.”

Saints hall of famer and kicking legend Morten Andersen also spoke on SportsTalk Monday afternoon, and had even higher aspirations for his new hall of fame contemporary.

“He would win president of the United States if that’s what he wanted,” Andersen said. 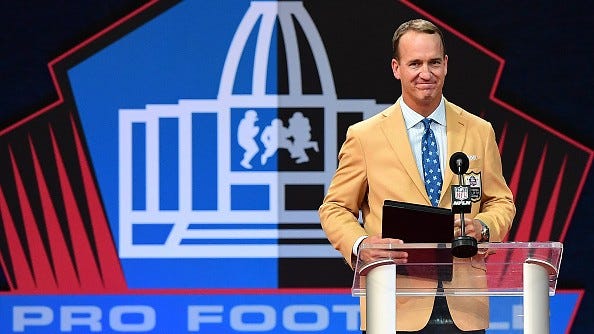 Peyton Manning trolls Tom Brady, who is booed by fans, during Hall of Fame speech

Peyton's enshrinement came with some unique caveats, one being that due to the combination of the 2020 and 2021 class, he had to hold his speech to 8 minutes. It was a challenge, Archie said, but Peyton had a trick up his sleeve.

With Tom Brady and a large number of Colts fans in attendance, Peyton knew that the crowd would boo at a mention of Brady. But that was fine, Archie shared, because as Peyton told him, "if they laugh or boo they’re gonna stop the clock, so I’m not worried about it.”