Chicago Bears wide receiver Cordarrelle Patterson clocked a speed in Week 2 that we have not seen in the NFL since 2016.

On his 46-yard rush against the Denver Broncos, Patterson reached 22.23 miles per hour, the fastest speed by a ball carrier in the NFL since a 45-yard touchdown reception by wide receiver Brandin Cooks Week 15 while playing for the Saints in 2016. Cooks reached 22.4 miles per hour.

Patterson’s run was literally faster than the top speed of an actual brown bear. Oh My.

The NFL’s Next Gen Stats provides various types of data, including speed, from every game via microchips placed in  every player’s shoulder pads.

No surprise, Chiefs receiver Tyreek Hill recorded the two fastest speeds in the Next Gen Stats era, both on kickoff returns in 2016. The man nicknamed ‘Cheetah’ reached 22.77 miles per hour Week 12 on an 87-yard return for a touchdown. Earlier in the season, he recorded the fastest speed ever measured by NextGenStats, 23.24 miles per hour Week 2, on a routine 27-yard return.

In 2017, only one player reached the 22 mile per hour milestone - Jaguars running back Leonard Fournette. 22.05 to be exact on a 90-yard burst to the endzone for a touchdown.

In 2018, three players reached 22 miles per hour. Patriots free safety Devin McCourty returned an interception 84 yards for a touchdown Week 8 at a speed of 22.05 miles per hour.

Vikings running back Dalvin Cook clipped that speed by .02 miles per hour the very next week though on his 70-yard touchdown run.

But in Week 12, 49ers running back Matt Breida recorded the fastest time of the season. 22.09 miles per hour on his 33-yard run into the endzone.

Below are the fastest speeds by a ball carrier ever recorded in the NFL Next Gen Stats era: 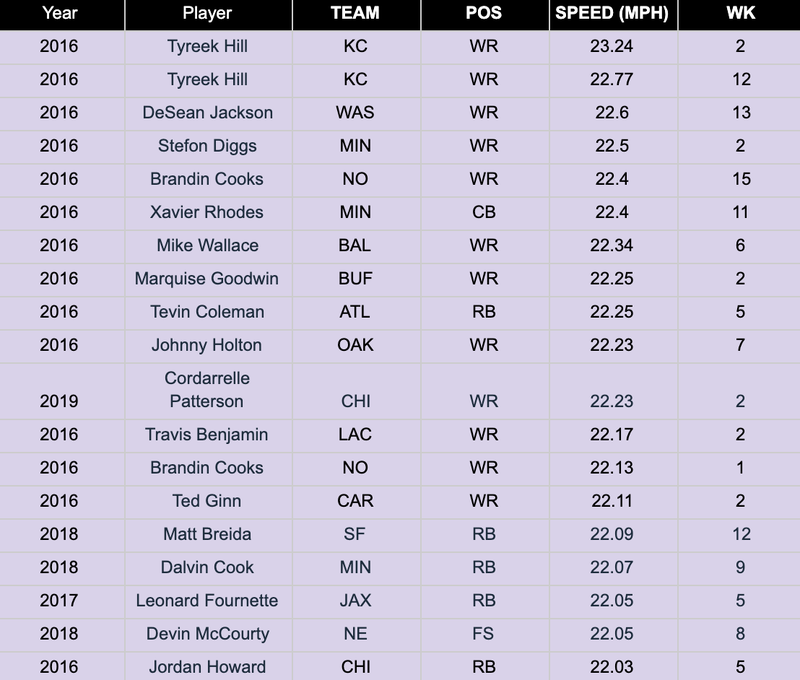