You probably saw the stat, and you probably had the same reaction as everyone else. One of surprise, one of skepticism, one of... "really?!" I'm guilty of it as well — heck, I even mentioned the stat in an article I wrote.

The stat in question was that Blake Griffin, whose dunking ability had made him an instant star and put him on highlight reel after highlight reel in the early portion of his NBA career, went through a strangely long stretch where he simply didn't dunk. At the time, the date of his last-recorded dunk was December 12, 2019, and Pistons fans were wondering just how much fuel Griffin had left in that lower body of his. And as it turns out, Griffin didn't care too much for that idea... but more on that later.

Many figures in sports media — again, I'm included in this — shared just how interesting they thought the stat was.

444 NBA players have dunked at least once in that span. Rudy Gobert has the most, with 267.

I am tied with Blake. You probably are too.

Blake Griffin hasn’t dunked in an NBA game since 2019 pic.twitter.com/I6HkXwbuU4

Blake Griffin hasn't dunked since 2019. Watch this man catch a lob from Kyrie in his first game and either Mailman it or slap the glass after. Laughing all the way as he runs back on defense. The only option is a class action lawsuit.

The statements in the above tweets are all objectively true. But they're also a tad misleading, and that's where Griffin's biggest (and very understandable) gripe comes. The Nets big man joined J.J. Redick on "The Old Man and the Three," available on Audacy, and explained what irked him most.

"To be honest, it bothered me a little bit. Because the stat was, 'he hasn't dunked in 400-something days'... sure!" Griffin said wryly. "I also had surgery in January. I played my last game for the Pistons before the bubble, or before the pandemic hit, like December 20 or something like that... in 2019. And then we didn't go to the bubble, so I didn't play until December 24 of 2020.

Obviously those 19 games converted into 400-something days because of the nature of the Pistons' 2020 season, Griffin's injury, and other factors. But you have to admit, whether it's misleading or not — and it is — it makes the stat a whole lot more jarring when you frame it in terms of days.

Fortunately, upon arriving in Brooklyn, it didn't take long for Griffin to shut everyone up with some dazzling aerial attacks on the rim, and that makes it a tad cringeworthy to look back at that "stat" and acknowledge that there was a real part of us that thought he might not be able to dunk anymore. Lesson learned. 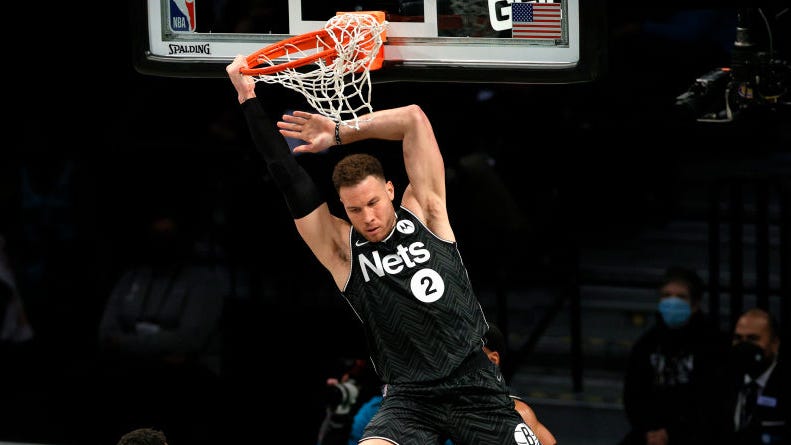