Given the recent civil unrest in the United States and around the world in response to a series of unarmed African Americans being murdered - most notably George Floyd in Minneapolis - there's been a slew of speculation about how the NFL will handle the national anthem in 2020.

Former San Francisco 49ers' quarterback Colin Kaepernick began peacefully protesting police brutality by taking a knee as the anthem played before games in 2016. It started a trend of black players either kneeling or raising a fist as the anthem played. Kaepernick, still just 32, hasn't been on an NFL roster since the 2016 season.

Given that a minority of responses to the recent string of unarmed citizens being killed haven't been peaceful, some who were once critical of Kaepernick's protest have changed their tone. New Orleans Saints' quarterback Drew Brees isn't one of those people, though. The future Hall of Fame said in 2016 that he "wholeheartedly disagreed" with Kaepernick's method of protesting, and still does today.

"I will never agree with anybody disrespecting the flag of the United States of America or our country," Brees told Daniel Roberts of Yahoo! Finance.

"Let me just tell you what I see or what I feel when the national anthem is played and I look at the flag of the United States. I envision my two grandfathers - who fought for this country during World War II, one in the army and one in the marine corps - both risking their lives to protect our country and to try to make our country and this world a better place. So every time I stand with my hand over my heart, looking at that flag and singing the national anthem, that's what I think about. And in many cases it brings me to tears, thinking about all that has been sacrificed - not just those in the military, but for that matter those throughout the civil rights movements of the 1960s and all that has been endured by so many people up until this point. And is everything right with our country right now? No, it's not. We still have a long way to go. But I think what you do by standing there and showing respect to the flag with your hand over your heart is it shows unity. It shows that we are all in this together, we can all do better and that we are all a part of the solution."

There's little doubt that Brees feels as passionately as he does about the service of his family members and his association of that with patriotism and the American flag. That said, not every person has had the same life experiences that Brees has. So while the flag may represent the best of America to Brees, others who have been racially profiled or worse may view it in a different light. 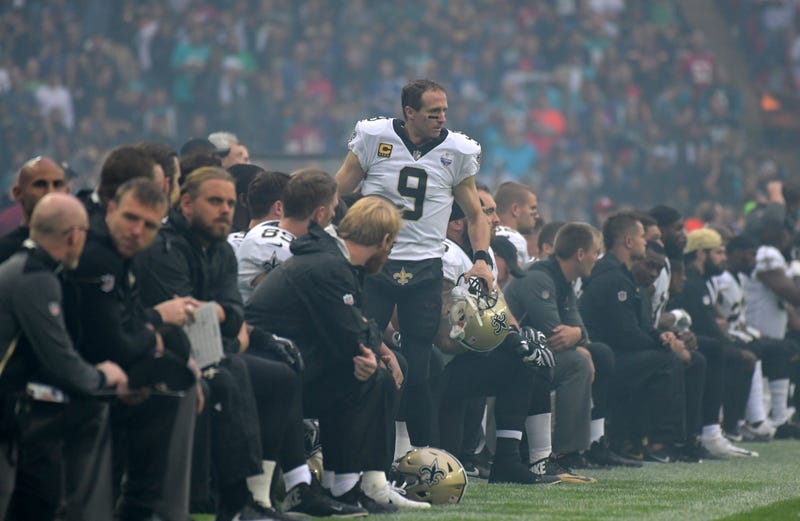 Drew Brees stands while a slew of Saints' teammates kneel prior to the national anthem during a game in 2017. Photo credit (Kirby Lee-USA TODAY Sports)

In the 2016 preseason, Kaepernick explained why he was protesting during the national anthem.

"I am not going to stand up to show pride in a flag for a country that oppresses black people and people of color," Kaepernick told NFL Media. "To me, this is bigger than football and it would be selfish on my part to look the other way. There are bodies in the street and people getting paid leave and getting away with murder."

Nate Boyer, a former Green Beret, advised Kaepernick to kneel rather than sitting, as he initially did. Kaepernick took that advice, and kneeled during the playing of the anthem during the 2016 season.

What was Kaepernick protesting? New York city resident Eric Garner was choked to death by a police officer on July 17, 2014, which was among a string of unarmed black men being murdered, many of the cases involving law enforcement. The officer in question in this case, Daniel Pantaleo, was fired for using an illegal chokehold on Garner after he was accused of selling loose exaggerates, but never indicted. Garner was heard on a video recording saying "I can't breathe!" 11 different times.

Flashing forward almost six years doesn't do this issue justice, but Floyd was killed by an officer that kneeled on his neck to restrain him after he was accused of using a counterfeit $20 bill. Like Garner, Floyd was heard on video pleading for his life, saying that he couldn't breathe 16 times within a five-minute span. The officer, Derek Chauvin, never removed his knee and Floyd was killed. Chauvin was fired from his job and ultimately charged with second-degree murder and second-degree manslaughter. The three other officers who were involved in attempting to arrest Floyd - and heard him gasping for breath - are being charged with aiding and abetting murder Wednesday.

Floyd's murder came just weeks after two men chased down unarmed 25-year-old Ahmaud Arbery and murdered him as he was jogging. Another man recorded the incident and seemed to be aware of what route was being taken by Travis and Gregory McMichael before they gunned down Arbery. It took 74 days in between this video being made public and the arrests of Travis and Gregory. William Bryan Jr., the man who recorded the incident, was also later arrested. Travis and Gregory were charged with murder and aggravated assault. Bryan was charged with murder and attempt to commit false imprisonment.

Last month, the family of the late Breonna Taylor alleged that the 26-year-old African-American woman was killed by police officers from the Louisville Metro Police Department after they forced entry into her home to attempt to execute a search of her home for controlled substances that they had a warrant for. The warrant was served without knocking on the door first, and Taylor's boyfriend, Kenneth Walker, thought his home was being broken into by burglars and ended up in a shootout with an officer. Taylor was fatally shot eight times. Walker was charged with assault and attempted murder. Officer Jonathan Mattingly was injured during the exchange. While the officers allege that Walker initiated the gun fire, Taylor's family has filed a lawsuit against the Louisville Metro Police Department that says that the officers acted "with a total disregard for the value of human life," entering the home and firing over 20 shots, which forced Walker to fire back. None of the drugs that the warrant was for were located.

Some see the American flag like Brees. Others see it and think of incidents like the three mentioned above. Many see it and take the good and the bad of living in the United States. Part of having freedom of speech, though, is the belief that even if things are 75 percent good, you should be fighting to make them 100 percent good, even if that's ultimately not realistic. The thing is, many haven't been treated at a level where they feel like their life in America has been 75 percent good.

Before the 2018 season, the NFL banned kneeling during the anthem, telling players that they either needed to stand while the song was played or wait in the locker room until after. Brees isn't going to be one to push that policy, obviously. The guess here is that quite a few others, based on their life experiences, may feel more inclined to make what they view as a necessary statement during broadcasts that have the attention of millions of Americans this fall.