Baker Mayfield survived a shoulder injury scare, Nick Chubb ran for another touchdown and the Browns got by the beat up Texans Sunday afternoon at FirstEnergy Stadium, 31-21.

Mayfield threw for 213 yards, completing 19 of 21 passes in the process with a touchdown and interception.

Chubb ripped off 95 yards and a score on just 11 carries while Kareem Hunt added 51 more yards on 13 totes.

After Mayfield was sacked on third down to end the opening possession, the Texans muffed the punt and Sione Takitaki recovered it at the Houston 35. Mayfield found Harrison Bryant for 29 yards to set up Andy Janovich’s 1-yard touchdown run for a 7-0 lead.

That was the good news. The bad: Jarvis Landry went to the locker room with a knee injury and did not return.

Once the Texans got their offense on the field, Tyrod Taylor moved them effortlessly down the field completing all six passes for 84 yards capped by a 22-yard touchdown to running back Phillip Lindsay to tie the game at 7 with 5:18 left in the quarter.

Mayfield completed a 10-yard pass to Donovan Peoples-Jones, who gets' blown up by Justin Reid, Christian Kirksey recovers for Texans at their own 27.

Mayfield's completion streak to open the game ended at 9 in a row after overthrowing tight end David Njoku. His next pass was then intercepted by Texans safety Justin Reid after Anthony Schwartz appeared to cut off his route. Mayfield walked off with trainers after injuring his shoulder trying to make the tackle and went to the locker room after stopping in the medical tent.

Mayfield quickly ran out of the locker room in time for the Browns’ next offensive series, but with Cleveland training 14-7 thanks to a 14-yard touchdown run by Taylor, who went in untouched on a third-and-9.

Mayfield and the Browns marched 10 plays and 75 yards capped by a 5-yard TD run by the quarterback to tie the game with 1:14 left in the first half at 14. Mayfield completed his final 10 passes of the day. 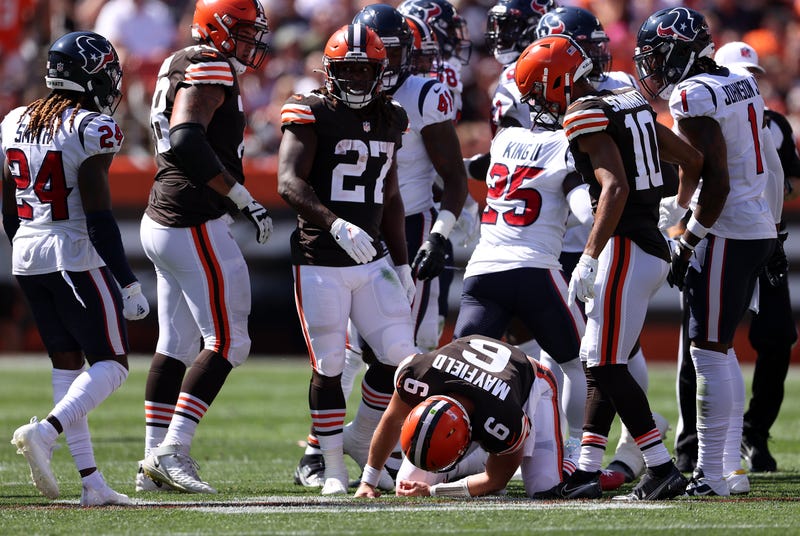 Quarterback Baker Mayfield #6 of the Cleveland Browns is on the ground after being hit in the first half in the game against the Houston Texans at FirstEnergy Stadium on September 19, 2021 in Cleveland, Ohio Photo credit Gregory Shamus/Getty Images

Taylor did not start the second half, instead rookie Davis Mills too the reps for the Texans. Taylor was ruled out with a hamstring injury.

Malcolm Smith, subbing for Anthony Walker who is on injured reserve, intercepted Mills to set the Browns up at the Texans 18. Chase McLaughlin hit a 30-yard field goal to extend the lead to 10, 24-14.

Houston answered with a 16-play, 75-yard drive that ended with a two-yard touchdown pass to Brandin Cooks on a quick slant to pull the Texans with 24-21 with 11:32 remaining.

Chubb countered with his third rushing touchdown in two games, a 26-yard run, to push the lead back to 31-21 with 5:52 remaining. Chubb has scored a touchdown on the ground in eight straight games.

Mills tried to bring the Texans back but Grant Delpit’s first sack and third down pressure by Jadeveon Clowney led to a 41-yard field goal try with 1:59 remaining that sailed wide left, sealing the victory.