If you’re going to bash a dude for being white, best make sure he’s not half-Black, too.

Be careful what you tweet for, people of the online realm. Mike McDaniel, the San Francisco 49ers offensive coordinator who has gone viral for his “adorable” news conferences featuring references to Mike Jones and engaging answers, is ticking off all the boxes to be the next trendy, young, white guy who takes a head coaching position before one of the many deserving Black candidates.

Hey. This article is factually wrong. I went to Yale with Mike and let’s just say…you should have done research on his background. he’s talked about it in the press. See here: https://t.co/Red3ZMDZuZ

How do you write a whole article with a factually inaccurate premise?!

This reality – so burdensome to Beckwith’s hot take – led to an extraordinary editor’s note from Deadspin, which is now added to the top of the article:

Editors’ note: We learned after the publication of this article that 49ers OC Mike McDaniel, whom we describe as a “white guy,” is in fact biracial. The article’s original text remains below. We regret the error.

I understand there’s a dearth of Black coaches in the NFL. Of the 23 employed, Mike Tomlin is the only Black coach. But Beckwith’s attacking stance is bizarre and more revelatory of his racially-charged thinking than anything.

The whole article is egregious, but this passage in particular stuck out to me, in regards to a tweet he plucked about McDaniel:

I promise you there is not a brighter football mind in the League. pic.twitter.com/FT1NhAlpAx

I don’t know who Andrew Hawkins is or how much weight should be put behind him saying, “I promise you there is not a brighter football mind in the League,” but it says a lot about the power of internet groupthink that a Black guy with “A call for justice shouldn’t warrant an apology” on his profile backdrop would tweet a statement like that.

Like, what? What does a Twitter user’s race have anything to do with anything? I sense a pattern here.

You could say Black candidates should be more entertaining with the media, that a little charisma goes a long way. How affable you are in a news conference shouldn’t matter, and there are a million problematic things with telling a Black person that they need to shuck and jive for a job. I know McDaniel is just being himself — which honestly isn’t as interesting as Twitter would lead you to believe — but being yourself is all it should take for Black coaches to get a shot, as well.

It sounds like Beckwith is suggesting the NFL should make an effort to exclude white folks simply because they’re white. And that’s missing the point.

The NFL shouldn’t exclusively hire Blacks or minorities this offseason. No one is suggesting that. What people want is an equal playing field. The NFL is an old boys’ club with an overwhelming majority of white people historically in positions of power, but to simply condemn McDaniel because he’s light-skinned and calling plays for Kyle Shanahan is cheap, lazy and illuminating on Beckwith’s shallow thinking. 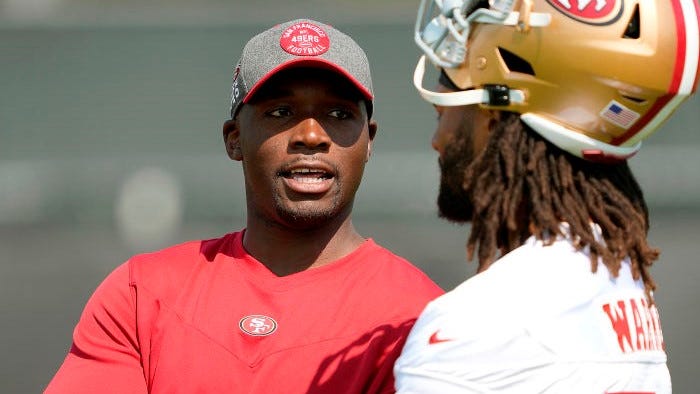