After a one-year retirement, Rob Gronkowski's first five games as a Tampa Bay Buccaneer were pretty underwhelming, as he had just 12 catches for 140 yards. However, if the past two weeks are any indication, the four-time All-Pro is starting to hit his stride, a scary thought for the rest of the league.

Gronkowski - who hauled in 79 touchdowns during his nine seasons as a member of the New England Patriots - didn't find the endzone in his first five games as a Buccaneer. However, while we've yet to see a vintage Gronk spike, the man who many think is the most dominant tight end in NFL history, now has a touchdown in consecutive weeks. He's also had 140 yards over the past two weeks, which isn't an especially impressive number when compared to his past production, but considering he had just 140 receiving yards in the first five games of the season, it may be a sign that he's beginning to scratch the surface of what he could do in Bruce Arians' offense.

Now 31, we shouldn't be shocked at how Gronkowski's first season in Tampa Bay has played out to this point. He's been pretty open about how physically and mentally scared he was after his final season with the Patriots, so while he may have stayed active in his season away from the NFL, certainly he didn't stay in NFL shape. It would have been silly to think that Gronkowski would be ready to play at an elite level in the first month of the season, or that the Buccaneers would even have him at the forefront of their offense early in the season.

At this point of his career, Gronkowski probably isn't capable of performing at his peak level, and the Buccaneers won't ask him to. But if he's 80 percent of what he was at the height of his powers, he's still the type of player that can take over a game for you. There was maybe a bit of concern in the first month of the season that he wouldn't even be able to get to that level, but as he's played himself back in football shape, we've seen flashes of what made him one of the most unguardable players in NFL history in his prime.

Imagine if Gronkowski plays at the level of a top-seven tight end in the second half of the season and into the playoffs. Chris Godwin will miss Week 8 after having surgery on his broken thumb, but his output will almost certainly improve in the second half of the season as he gets healthier. Ditto for Mike Evans. Scotty Miller has three games with 80 or more receiving yards in 2020. Ronald Jones II and Leonard Fournette have combined to create a pretty strong one-two punch on the ground, with both averaging over four-and-a-half yards per carry. Oh, and Antonio Brown, he of over 11,000 career receiving yards, will join the team in Week 9.

Perhaps he hasn't been at the level of Russell Wilson, but Tom Brady is certainly in the NFL MVP discussion, having tossed 18 touchdowns to just four interceptions. He's done that while feeling his way out in a new offense, one that's had some moving parts at key spots. As we near the second half of the 2020 regular season, Gronkowski, perhaps Brady's favorite target ever, appears, at least to some degree, to be rounding into form.

The Buccaneers checked in at No. 5 on this week's RADIO.COM Sports NFL Power Rankings. If Gronkowski continues to improve, the 5-2 Buccaneers could end up as the No. 1 seed in the NFC. 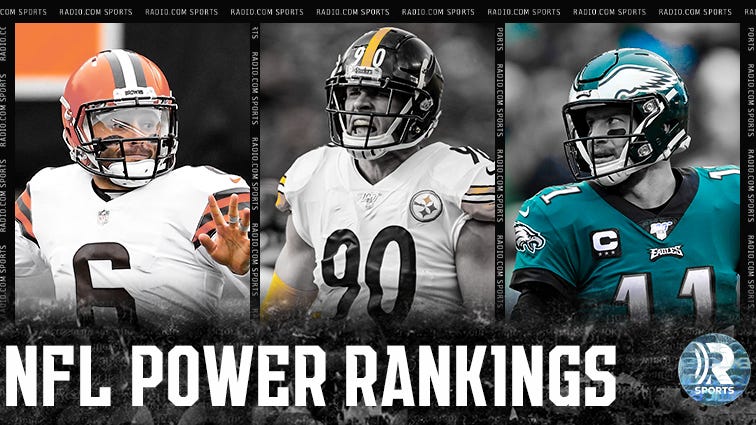 NFL Power Rankings: There's another shake-up at the top