Baker Mayfield's wife Emily has once again taken to social media to defend her husband from critics.

On Sunday, Emily re-posted a message from an Instagram user, identified as @williamsj14, touting a list of Baker's accomplishments since he was drafted by the Browns in 2018.

The post included a message encouraging fans not to "quit" on Baker while he's "down."

"We are quick to forget the good times during the bad times," the post said. "That's all I'm saying. Don't quit on the dude while he's down. He didn't quit on us when we were." 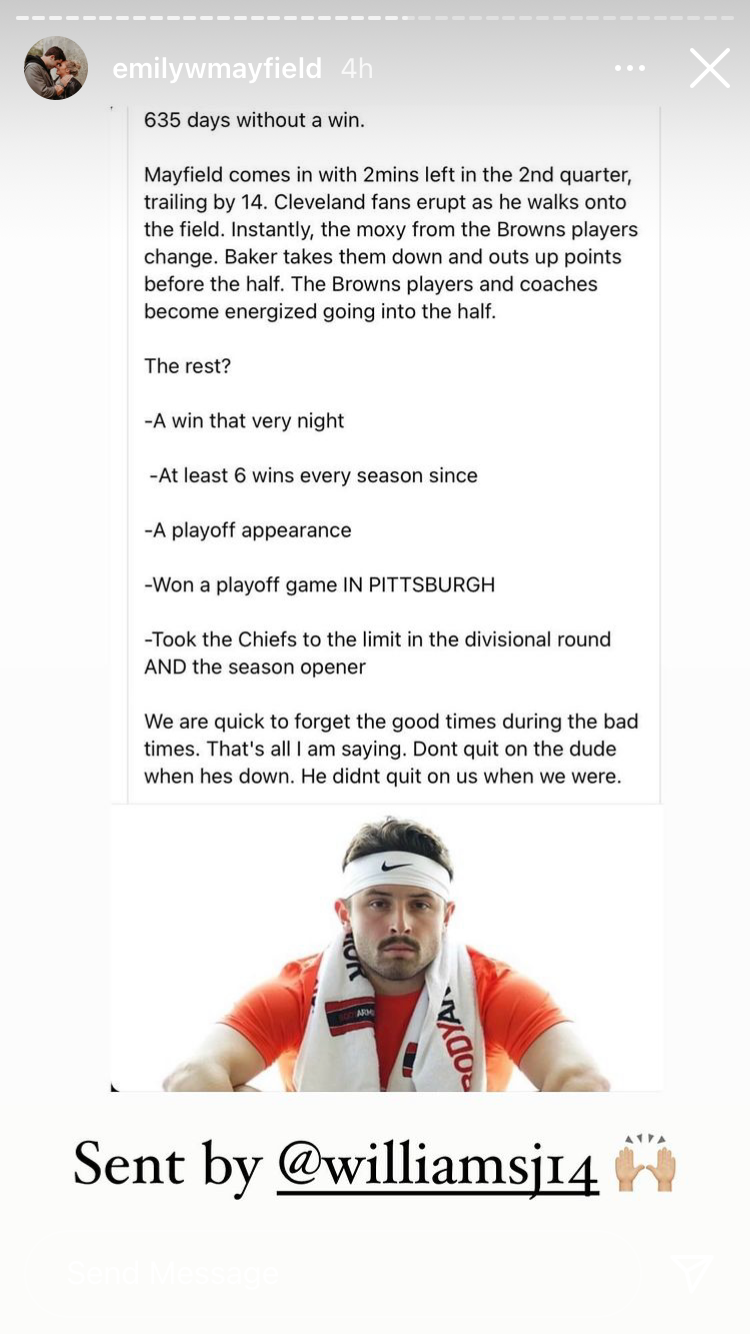 The post comes just a week after Emily apologized over a separate post in which she shared a comment suggesting Baker's teammates should "take the hint" and "get tougher."

That post came amid mounting criticism of Baker as he seemingly struggled while playing through injuries. It was later deleted.

Clearing something up - Emily Mayfield re-posted this to her Instagram story tonight. She didn’t write it but clearly agreed with and shared it. It has since been deleted. pic.twitter.com/OTNot5d6UW

The social media row was the latest turn in a season that hasn't gone exactly to plan for the Browns and second-year head coach Kevin Stafanski.

Several key players have been lost to injury or played hobbled, including Mayfield, while star wide receiver Odell Beckham Jr. appeared to force his way out of town after some social media shenanigans by his father.

The rocky season to date has fueled further questions about Mayfield's long-term prospects in Cleveland, with reports indicating the Browns prefer a wait-and-see approach on a potential long-term contract extension. The team has already exercised Mayfield's fifth-year option for 2022, but some fans aren't so sure, even raining down boos on the fourth-year signal caller.

Meanwhile the Browns were 6-5 through their first 11 games -- a disappointment relative to last season's AFC title game appearance, but still in position for a potential playoff run. They were set to face the division-rival Ravens in Week 12.