Brett Favre has been in a position similar to that of Aaron Rodgers. And even though the two Green Bay Packers' icons have had their differences, Favre thinks that the organization made a mistake in using their first-round pick on former Utah State quarterback Jordan Love.

In fact, Favre says that it wouldn't be unreasonable for Rodgers to have disdain for the fact that the Packers traded up to pick No. 26 to select his likely successor.

"I'll be honest with you, I was very surprised," Favre told Rich Eisen Wednesday. "I really thought that they would go in the direction of an offensive weapon. They were several plays from being in the Super Bowl. Nothing against Jordan Love...I mean no disrespect...but you trade up to get a guy and he may turn out to be great...I hope he does...but you trade up to get more of a project. He's a little bit unproven...he has a lot of upside, there's no doubt about it...but it can't help you to get to the Super Bowl immediately. And I just think that if you're playing for now...as all the teams in the league will tell you they are...Green Bay's one of them that should be playing for now...they don't draft any weapons, not just in the first round but any weapons that can help immediately. That just sends a message of disrespect, I would think, to Aaron Rodgers. He has every right to be disappointed if he is."

Favre says that he has spoken to Rodgers since the Packers made the decision to draft Love last week, and while he was hesitant to reveal full details of their conversation, Favre did acknowledge that Rodgers was "surprised" by the pick.

A year ago, the Packers reached the NFC Championship Game in the team's first year under head coach Matt LaFleur. Granted, many thought the Packers weren't as good as their 13-3 regular season record indicated, and perhaps losing 37-20 in the NFC Title Game proved that thought process correct. Still, in his first year in a new offensive system, Rodgers threw for over 4,000 yards, 26 touchdowns and just four interceptions. It's not unreasonable to think that the two-time NFL MVP could be even better in year two in LaFelur's system.

If Rodgers does have a monster year in 2020, the future Hall of Famer won't do so because he was handed any additional wide receivers to work with via his draft class. While other NFC contenders like the 49ers, Dallas Cowboys, Minnesota Vikings and Philadelphia Eagles used first-round picks on wide receivers, none of the Packers' nine selections were devoted to the position. 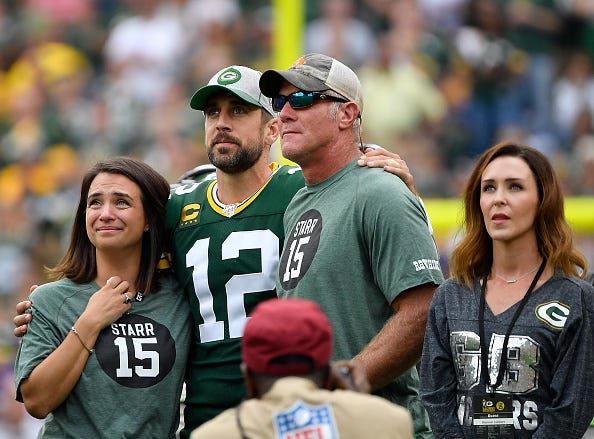 Green Bay general manager Brian Gutekunst did draft running back A.J. Dillon in the second round and tight end Josiah Deguara in the third round, though it's fair to say that the Packers didn't keep pace with some of the NFC's other potential Super Bowl contenders. The team's biggest offseason pickup at the wide receiver position was signing veteran Devin Funchess, who played in just one game a season ago with the Indianapolis Colts.

Before the draft, Rodgers made reference to the fact that the team hasn't spent a first-round pick an on offensive player that wasn't a tackle since they selected him in 2005. 2002 - when the team took wide receiver Javon Walker - was the last time that the Packers took an offensive player that wasn't a quarterback or a tackle in the first round. Rodgers, now 36, was 19 years old at the time of that selection.

Favre now worries that the second adversity hits in Green Bay, there will be calls for Love to replace Rodgers.

"When adversity hits this year...0-3...a couple bad games or whatever...then it's going to rear its ugly head and the daggers are going to be out."

Of course, the Packers did select Rodgers with the No. 24 overall pick in the 2005 NFL Draft while Favre was still employed by the team. While there are some similarities in these two situations, though, there's quite a few differences as well. First of all, Rodgers fell to the Packers with their pick. The team traded up to assure they would get Love. Secondly, Favre regularly flirted with retirement and became increasingly uninterested in offseason programs when he reached his mid-30s. There's no indication that has been the case with Rodgers.

For now, Rodgers is relatively secure as the Packers' starting quarterback. Most scouts didn't think Love - who regressed in his junior season - was ready to be an immediate starter. On top of that, the Packers signed Rodgers to a four-year/$134 million deal that guaranteed him over $98 million in August of 2018. There's not an out in the deal until after the 2021 season, and even then the Packers would have to take on $17.2 million if they released their franchise icon.

Still, Favre spent his final three seasons with the New York Jets and the Minnesota Vikings, despite winning three league MVPs in Green Bay. The circumstances aren't the same, but Favre sees enough similarities to believe that Rodgers won't finish his career with the Packers.

"I think he'll play somewhere else. My gut tells me that he won't finish his career as a Green Bay Packer." 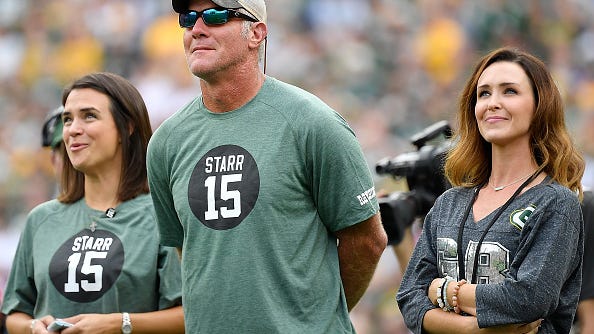 Brett Favre Recalls Junior Seau's Death: 'If He Can Do That, What About Me?'