In our Audacy pre-draft scouting report, we evaluated then-North Dakota State quarterback Trey Lance by saying that he was "the type of selection that could put you on a parade float or get your regime dismissed within the next five years," adding that he wasn't a prospect that risk-averse teams would be high on.

To this point, that assessment seems pretty spot on.

In fact, Mike Florio of Pro Football Talk said Friday that he believes Lance -- ultimately selected with the No. 3 overall pick by the San Francisco 49ers -- has been the most disappointing quarterback in the league to this point:

"The guy that disappoints me the most -- and this may be a little outside the box, but that's OK -- is Trey Lance. He was the third overall pick ... all that was made of the move to get him ... and I think there's been a hope from the day that he arrived that he would win that job. He couldn't beat out the guy they can't wait to get rid of [Jimmy Garoppolo]. He could not beat out the guy that they can't wait to get rid of. That, by definition, is a disappointment from Trey Lance and his development as an NFL quarterback."

After playing in a Taysom Hill-type role for the 49ers early in the season, Lance got a chance to play the entire second in San Francisco's Week 4 loss to the Seattle Seahawks. Lance did rush for 41 yards in the game, but completed just nine of 18 pass attempts. With a full week to prepare for his first NFL start in Week 5, Lance rushed 89 yards against the Arizona Cardinals, but completed only 15 of his 29 pass attempts with zero touchdowns and one interception.

There was some thought when Garoppolo went down with the latest in what's been a long line of injuries that he'd never regain his starting job. However, Lance doesn't look ready to start for a contending team right now, and has been ruled out for the team's Sunday Night Football tilt with the Indianapolis Colts. Garoppolo will return just in time to take back over as the starting quarterback for the 49ers.

None of this is to say that Lance won't develop into a star quarterback, but when you trade three first-round picks and a third-round selection for the chance to take a player, you'd like them to be ready to make an immediate impact. Lance may have had the highest ceiling of the three, but he played significantly less at the collegiate level than Justin Fields and Mac Jones did, both of whom were selected after him. It will be interesting to see whether the 49ers live to regret taking Lance over either or both of Fields and Jones.

Kyle Shanahan and John Lynch inherited a team that went 2-14 the year before they arrived, and built a team that reached the Super Bowl three years later. However, they currently sit at 2-3, with three losing campaigns in the first four seasons of their regime. One wonders if the 49ers -- despite a possible lack of ammo -- would re-enter the Aaron Rodgers discussion this winter if they aren't impressed with what Lance has shown in his rookie season. 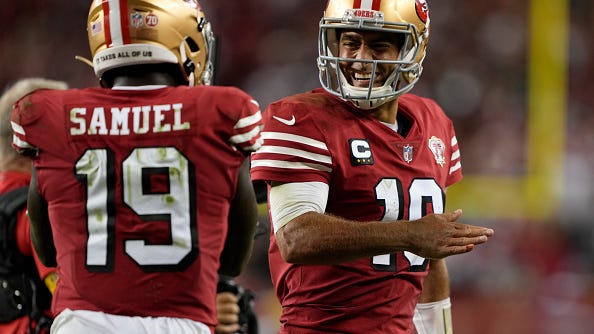 NFL Uniform Schedule: What every team is wearing in Week 7