With an additional 17th game on the 2021 NFL schedule, we knew that the record books would probably look a little bit different at season's end than at the beginning of the year. What we didn't know is which records would be broken, which would remain untouched but would be challenged, and which wouldn't even be sniffed at despite the extra contest to produce stats. We gave it our best guess, though, and tried to pick out some names to watch for. 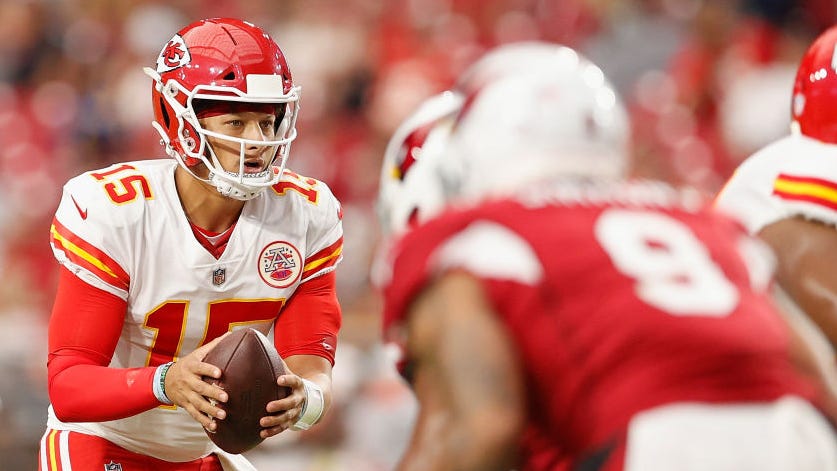 And, unlike most prediction pieces I write — which I'm utterly ashamed of ever having written after a few weeks have passed — I'm... actually pleasantly surprised with this one! No, it didn't take a rocket scientist to guess that certain records were more susceptible to being broken than others, and the same goes for which of today's stars were most likely to be the candidates. Still, the records I figured might be up for grabs are, for the most part, the ones that are up for grabs. The guys who I thought would be in the race are, for the most part, the guys that are in the race. Not bad! Just don't read my other prediction articles, because I'm not as willing to gloat about those ones.

But enough about the past and the other botched guesses I've had. Let's instead focus on the present and look at which players, after five weeks of the 2021 NFL season and with the beginning of bye weeks ahead, are on-pace to break significant single-season records should they continue their scorching — or not-so-hot — performances out of the gate. 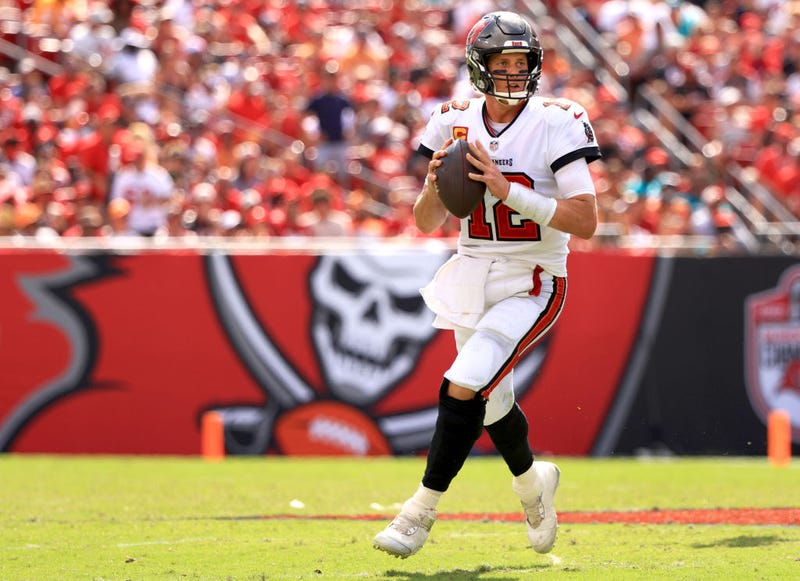 Ahead of the season, esteemed football writer Peter King said that he wouldn't have been particularly surprised if Matthew Stafford, in his new L.A. surroundings, had thrown for 6,000 yards in the 17-game schedule. And though I may not have gone as far as 6,000 yards, I suspected Patrick Mahomes might have been the best bet to break Manning's single-season mark.

But it's neither of those guys, despite strong showings from both. Instead, it's 44-year-old Tom Brady, because of course it's 44-year-old Tom Brady. There are becoming fewer and fewer words to describe this guy, and it remains to be seen when, or if, he will ever slow down. He's currently the top-ranked quarterback on Pro Football Focus, with a sparkling 93.4 grade, and he's not only on pace to break Manning's record. He's on pace to shatter it. 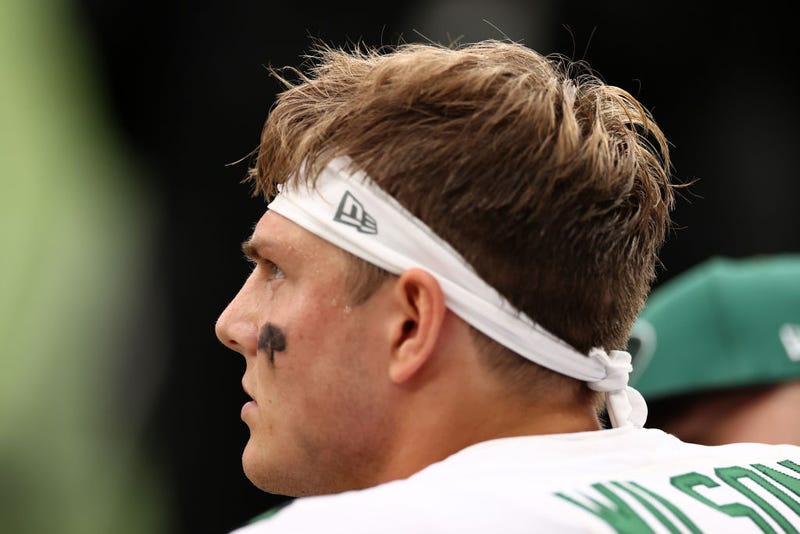 Zach Wilson is hoping to turn it around after a tough start to his career. Photo credit (Ryan Pierse/Getty Images)

Well, how about that. Peyton Manning has one desirable record up for grabs... as well as a not-so-desirable record getting threatened by Jets QB Zach Wilson. Wilson's start hasn't been the prettiest thing in the world to watch, though his upset victory over the Tennessee Titans and solid stat line was certainly encouraging.

Jets fans may be getting a little uneasy, but head coach Robert Saleh reminded us that we should all relax before hitting the panic button. It's still very early, and you can look through NFL history to see quarterbacks with similarly rocky starts, including Josh Allen, John Elway and Terry Bradshaw. Based on the interception record, Peyton Manning can qualify as well. 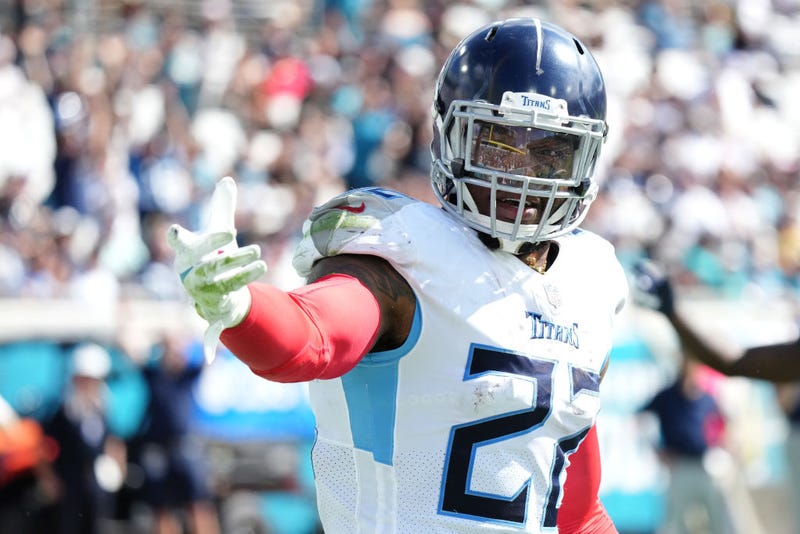 Will Derrick Henry's workload ever catch up to him? Photo credit (Mark Brown/Getty Images)

A three-piece for Tractorcito. Let's go one by one, starting with his insane amount of rushing attempts to this point.

Apparently not if you're Henry, though, who is also looking to break some yardage records:

So far: 640 rushing yards | 17-game pace: 2,176 rushing yards
Record: 2,105 rushing yards (Eric Dickerson)
Jeez. And if he couldn't get any scarier, he's doing more through the air than ever before, making him a legitimate threat to the all-time record for single-season yards from scrimmage. 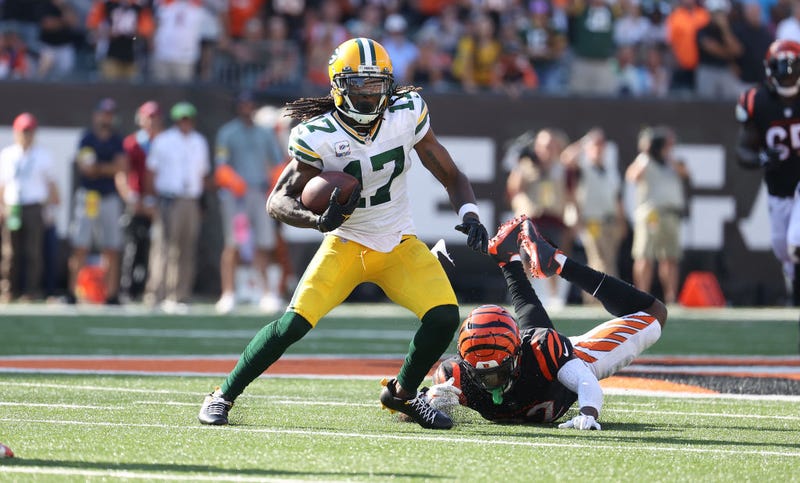 Despite offseason drama, Aaron Rodgers and Davante Adams have picked up right where they left off. Photo credit (Andy Lyons/Getty Images)

I thought that Adams might have a better chance to break Randy Moss's single-season receiving touchdowns record, seeing as Adams was able to find paydirt a whopping 18 times in 14 games last year. But while he's only found the end zone twice so far this year, he has completely torn up and down the field, while also leading the league with 42 receptions.

The reception count is high, but it's not enough to be on track to dethrone Michael Thomas and his 149-catch season back in 2019. The yardage, on the other hand, is just enough to threaten Megatron and his unforgettable 2012 campaign. Perhaps we'll see our first 2,000-yard season ever from a wide receiver. 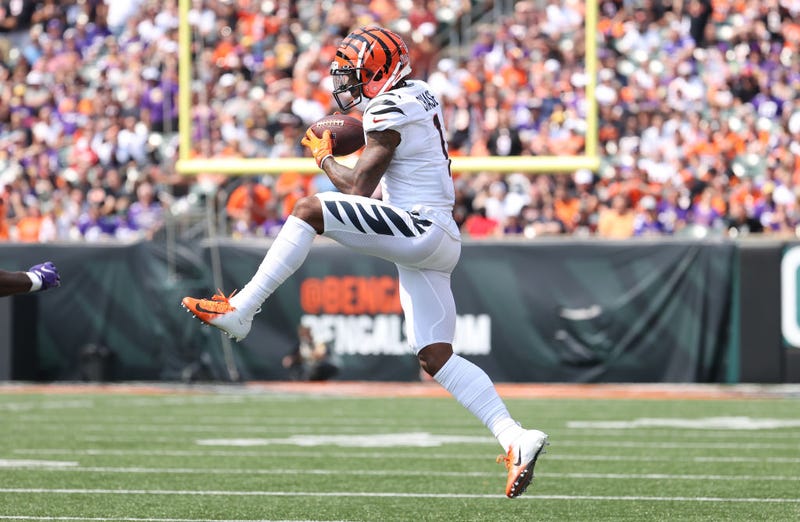 Could Jefferson's record get broken the year after it was set... by his former LSU teammate? That would be quite the story, and it's looking like it's well within reach for Chase. The biggest obstacle in him accomplishing such a feat, unfortunately, just occurred, as Joe Burrow suffered a throat injury in Week 5. Thankfully, he's expected to suit up in Week 6, and hopefully it doesn't affect his play at all.

Chase also has five touchdowns through five games, which sets him up to tie Randy Moss and his 17-TD rookie record, though one touchdown per game is an awfully lofty rate to keep up with. 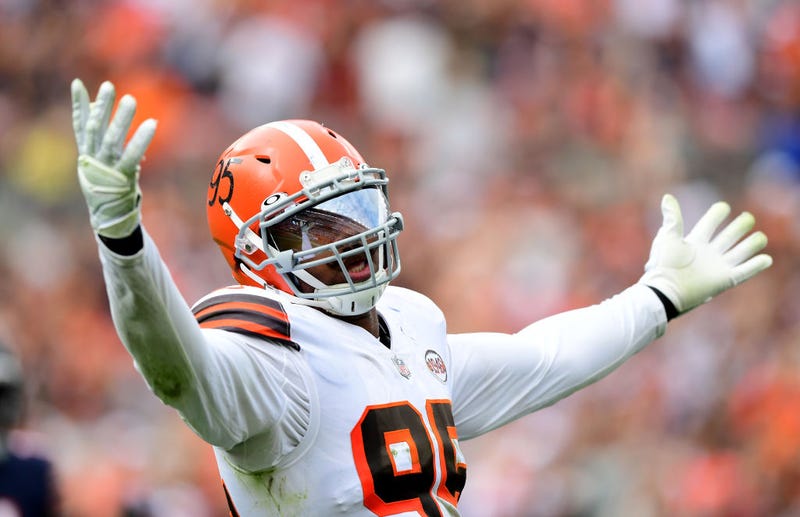 Myles Garrett has been on an absolute tear to start the 2021 season. Photo credit (Emilee Chinn/Getty Images)

Another record that "just" went down was the single-season sacks record, which was long believed to have been held by Michael Strahan and his 22.5 sacks. However, unofficial sacks on Pro Football Reference now give Al Baker the title, with 23.0 in his 1978 rookie season.

But will all of that even matter by the time Garrett is done with his otherworldly 2021 campaign? Maybe not. He's been all but unstoppable to this point in the year, with an especially impressive four-sack display against the helpless Bears in Week 3. With freakish athleticism and speed that we simply don't see from people his size, Garrett isn't simply someone that offensive linemen can "figure out," so expect the sacks to keep on coming. 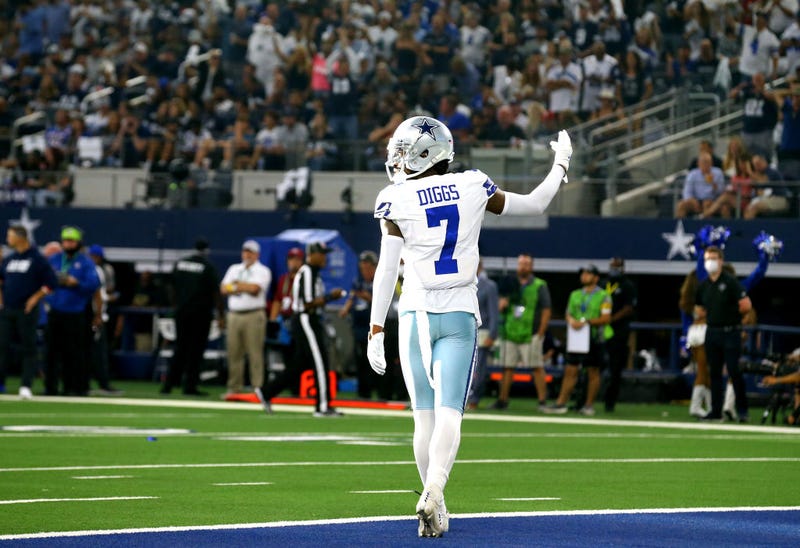 Trevon Diggs had at least one interception in each of the first five games of the 2021 season. Photo credit (Richard Rodriguez/Getty Images)

Night Train Lane picked off opposing QBs a whopping 14 times in his rookie season. He followed that up with a 10-INT showing in year three, showing he truly had a nose for that type of thing. But that was in 1952, so this record was bound to come down soon, right?

Nearly seven decades later, Diggs is the guy who's threatening. He's nearly halfway there through less than a third of the season, and he has successfully intercepted a pass from the opposing quarterback in each contest so far. It's part of his playing style — he'll occasionally give up a big play, but that's the sacrifice you're willing to make for someone who can completely flip the script in the blink of an eye with a clutch pick. 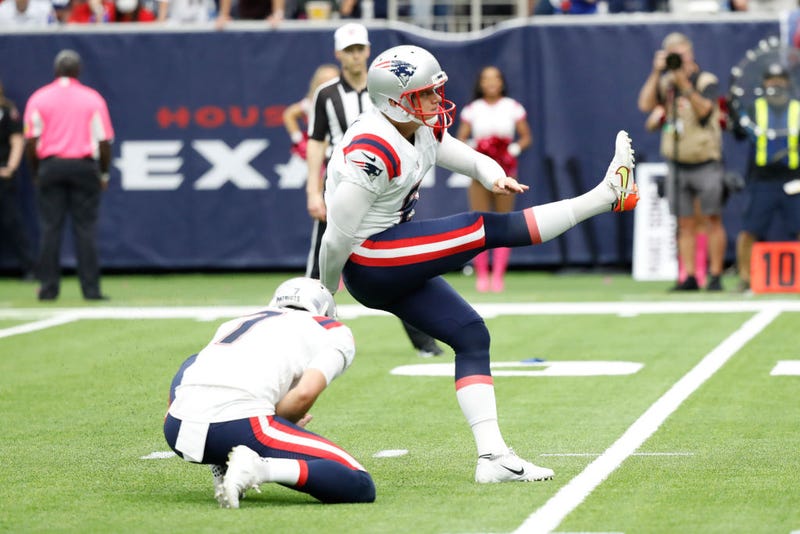 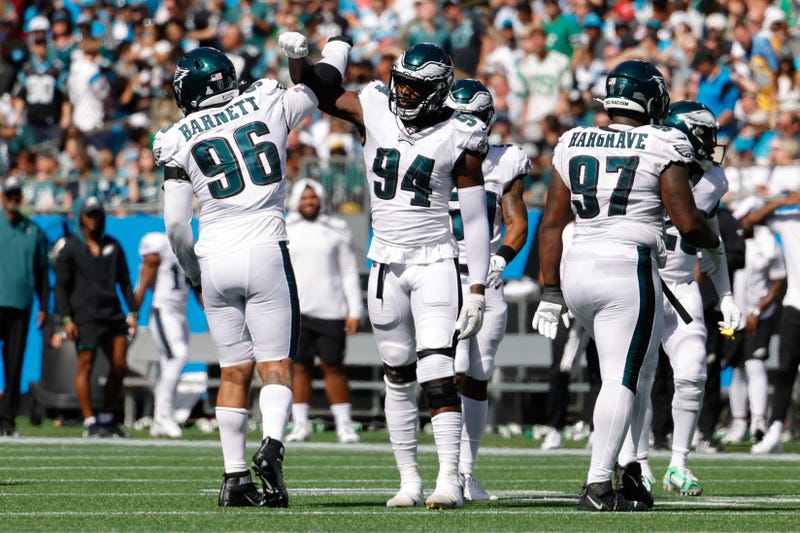 Nick Sirianni's squad has been as undisciplined as any we've ever seen out of the gate. Photo credit (Douglas DeFelice/USA Today)

The last, and only time, a team had more than 160 penalties in a season, they got up and relocated to Las Vegas a little while later. Okay, so that's not the exact cause-and-effect of that move, but what the Eagles are doing might make their fan base want to pack up and leave out of pure frustration. Count me among that group, as I've lost quite a few hairs watching play after play after play called back because of a holding, an illegal receiver down field, an unnecessary roughness or any other dumb, undisciplined penalty you can think of.

Yet another, Yet another Eagles Touchdown taken off the board by a pick penalty. 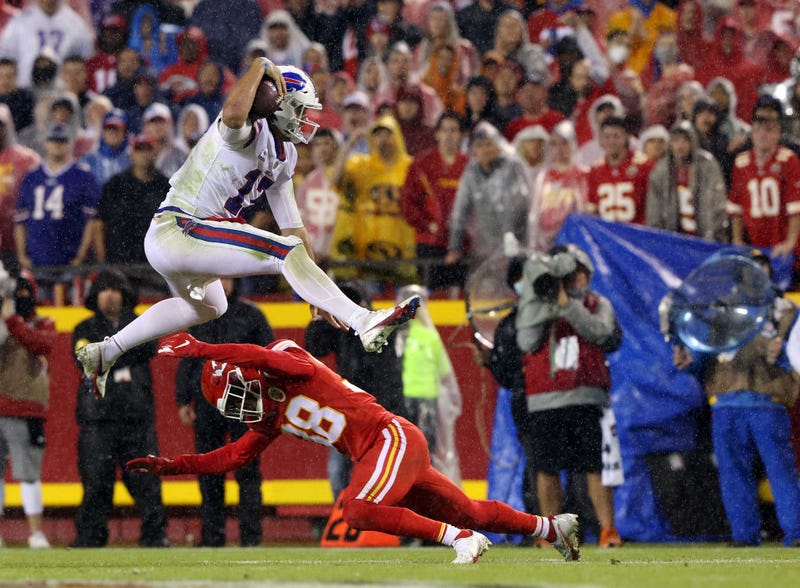 This image serves as a nice representation of how the Chiefs defense has looked. Photo credit (Jamie Squire/Getty Images)

This one, along with most of the others on this list, gets a boost because of that extra 17th game. When you look at the points allowed per game, the 1981 Colts' figure was 33.3, while the 2021 Chiefs' figure sits at 32.6. Clearly, though, there's a problem with the Kansas City defense, especially when you have the one and only Patrick Mahomes at quarterback... and even he can't produce enough offense to make up for the defensive lapses on the other side of the ball.

This stat should tell you a little bit about just how ugly it has been.

How bad is the Chiefs defense?

On a per-play basis, the most prolific offense in NFL history is the 2000 Rams. They averaged 7.0.