The AFC North has been mostly dominated by the Pittsburgh Steelers and Baltimore Ravens over the years, but now it could make the case as the toughest division in the NFL.

Last year, the AFC North put three teams in the playoffs — the Steelers, Ravens and Browns — and the Cincinnati Bengals are nothing to scoff at with a young, talented roster led by Joe Burrow.

There is no question that the AFC North will be a dogfight this year, so here are some key themes to watch for each team as they battle it out: 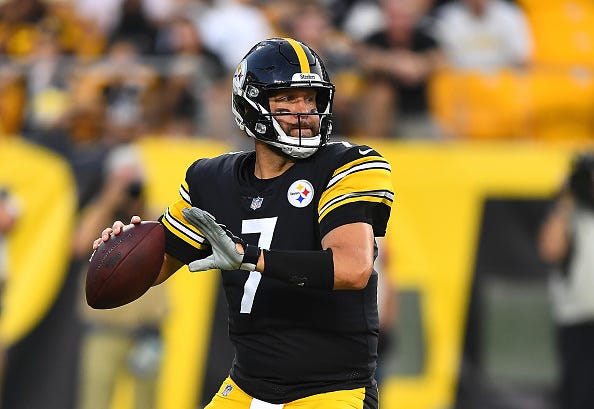 Biggest storyline heading into the season?
﻿While the Steelers have potential on offense with a new OC, Ben Roethlisberger coming back two years removed from major elbow surgery, a new tight end in Pat Freiermuth and running back Najee
Harris, it could all fall apart if the offensive line is as bad as people
believe it to be.

Who will be the X-factor?
With the Steelers near the bottom of nearly all running categories last season, rookie Najee Harris will be the X-factor for this Steelers offense. If Harris can help get a run game established, it will be Roethlisberger more flexibility and the Steelers the opportunity to no longer be a one dimensional offense,
like they were in 2020

The Steelers will make the playoffs if... they stack wins early in order to get into the playoff picture. They have the hardest schedule in the NFL this season and need to establish
themselves early. Home games against Las Vegas and Cincinnati are must wins because the Baltimore Ravens and Cleveland Browns will likely make it very difficult for Pittsburgh to repeat at AFC North champs.

The Steelers will miss the playoffs if... As previously stated, the biggest road block (other than unexpected injuries) is
the offensive line. Tackle Zach Banner is already starting the season on the IL as he attempts to return from major knee surgery. Chuks Okorafor is the only returning member of the offensive line and he has been the lowest ranked offensive player for the Steelers by PFF this preseason. Add to that Kevin Dotson dealing with nagging injuries along with rookies Kendrick Green and Dan Moore Jr. being thrown into the fire right way. If this line doesn’t gel quickly, it could be a long season. Even if the Steelers have one of the top defenses in the league. -Andrew Limberg, 93.7 The Fan, KDKA 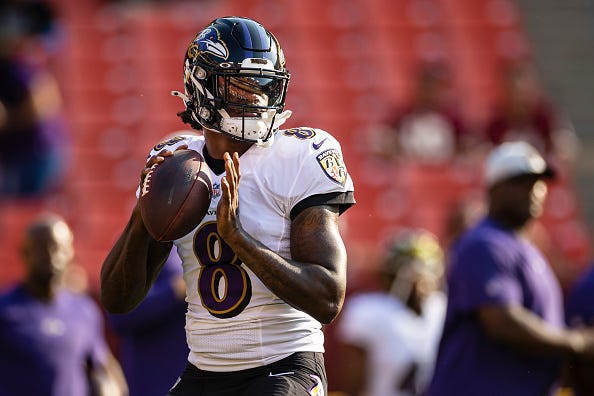 Biggest storyline heading into the season?
Can the Baltimore Ravens offense perform? And no team has had a worse summer than Baltimore: Lamar Jackson got Covid for the second time and missed the start of training camp, 1st-round draft pick WR Rashod Bateman suffered a groin injury and will miss the first few games, and JK Dobbins, Baltimore’s dynamic running back entering his second season, sustained a torn ACL. Will offensive coordinator Greg Roman be able to scheme enough scoring with only the league’s most electric quarterback and a lackluster supporting cast?

Who will be the X-factor?
Lamar Jackson matters more to the Ravens’ success than any single player matter’s to their team’s success. The entire gameplan is down to his skill as a runner, the threat of him as a runner, and his ability to move within the pocket to deliver downfield passes and move out of the pocket when there's nowhere to throw. Of course, the true X-factor will be the Ravens pass catchers which remain Baltimore's biggest question marks. Can Marquise "Hollywood" Brown consistently make big plays? Will Sammy Watkins be a threat? Can Bateman become a dynamic weapon? Will Mark Andrews be able to break every double-team he faces and catch the ball consistently? Can anybody on this offense even get open? Jackson is a better passer than people think, but if his receivers are not even average the offense will falter.

The Ravens will make the playoffs if…For the Ravens, making the playoffs is about everything going to plan. A restructured offensive line (with additions Kevin Zeitler and Alejandro Villanueva) rebounds from an awful 2020, Jackson stays Covid-free and improves in year four, Gus Edwards becomes a dominant feature back, and the defense continues to be one of the league’s best thanks to a great secondary and (if everything works) a solid pass-rush. With a boost from an underrated home-field crowd in Charm City, John Harbaugh’s team has hopes to not only win the AFC North but overcome a recent playoff hoodoo and challenge for a Super Bowl.

The Ravens will miss the playoffs if... things don’t go to plan. While Jackson gets the most flack, the Ravens’ coaching staff’s inability to adjust on the fly is the real culprit in the team’s postseason flops. In 2021, the Ravens miss the playoffs if Roman’s offense still can’t build a passing game and if defensive coordinator Don "Wink" Martindale can’t scheme a pass-rush and doubles down on aggressive blitzes which leave the secondary vulnerable. Baltimore’s 2021 bellwethers come early: Week 1 at the Raiders and Week 2 home to the Chiefs. - Ben Krimmel, 106.7 The Fan, WJFK 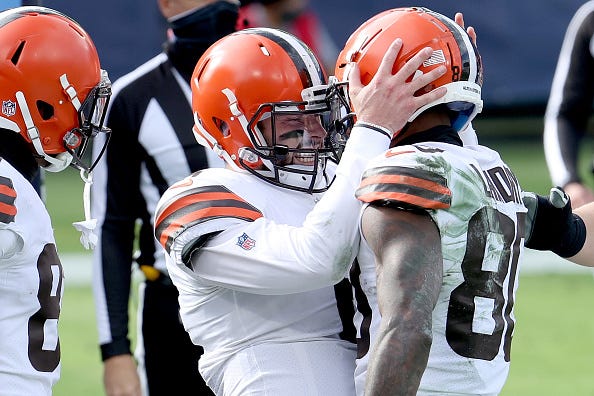 Biggest storyline heading into the season?
These are not the same old bumbling, stumbling Browns anymore. Coming off their best season in 26 years that saw them finish a post-1999 expansion era franchise best 11-5 in the regular season, end the NFL’s longest running playoff drought of 18 years, and win their first playoff game since January of 1995, big things are expected of them in 2021.

The Browns are considered a legitimate Super Bowl contender, or at least a challenger to Kansas City in the AFC. All 11 offensive starters from 2020 returns for 2020 NFL Coach of the Year Kevin Stefanski, who enters his second season in Cleveland. Browns EVP/GM Andrew Berry took a blowtorch to the defense and rebuilt it this offseason from front to back including signing defensive end Jadeveon Clowney, linebacker Anthony Walker and safety John Johnson III in free agency and drafting cornerback Greg Newsome II in round 1. The Browns have never been to a Super Bowl, and it could be argued this team is their best chance to finally get there. There’s no sneaking up on anyone this year, so will they meet expectations and live up to the hype?

What will be the X-factor?
﻿Health will make or break the Browns in 2021. There is no worry about buy-in under Stefanski. Baker Mayfield has established himself as the team’s leader. The defense has been rebuilt. If healthy, the Browns are contenders, and it seems the only thing that could derail them are a rash of injuries.

The Browns will make the playoffs if…Mayfield carries the success he had in the second half of last season forward into 2021 and can successfully spread the wealth between Odell Beckham Jr., Jarvis Landry, Nick Chubb, Kareem Hunt, Austin Hooper, David Njoku and Harrison Bryant. Defensively, if Jadeveon Clowney can stay healthy, he and Myles Garrett should have no problem terrorizing opposing quarterbacks. Veteran cornerback Denzel Ward teams up with rookie Greg Newsome II and veteran safety John Johnson III to anchor the secondary which should help them get off the field on third and fourth down with more regularity than they did in 2020.

The Browns will miss the playoffs if…-They get hit with a ton of injuries and their kicking situation becomes a problem. -Daryl Ruiter, 92.3 The Fan, WKRK 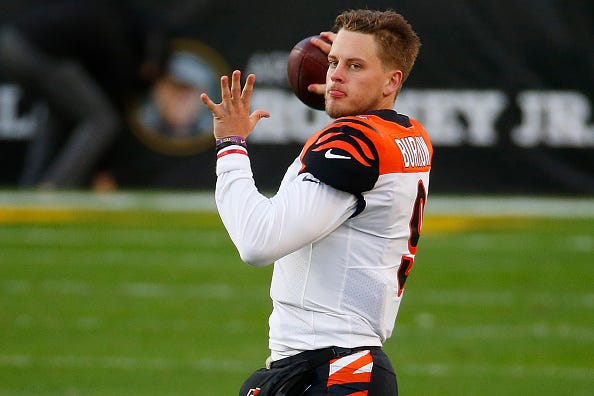 It’s “put up or shut up” time for the Bengals, with embattled coach Zac Taylor facing a make-or-break year in Cincy. There’s plenty of star power here—Ohio native Joe Burrow is two years removed from what many would consider the greatest individual season in college football history. But do the Bengals, who last won a playoff game in 1990 (six years before Burrow was born), offer a strong enough supporting cast to harness that immense potential? We’re about to find out.

Biggest storyline heading into season?
Without a doubt, the health of Joe Burrow. The second-year quarterback didn’t look all that comfortable during training camp, appearing tentative at times while struggling to get on the same page with his receivers. Just 10 months removed from ACL surgery, Burrow’s pocket jitters are understandable. Unfortunately, Cincinnati’s patchwork offensive line won’t do much to put his mind at ease.

Who will be the X-factor?
Cincinnati took a major risk this offseason by drafting Burrow’s former LSU teammate, Ja’Marr Chase, instead of Oregon tackle Penei Sewell (selected two picks later by the Lions at No. 7), a transcendent talent at a position of need. Chase was the top receiver in college football as a sophomore in 2019, but hasn’t had a particularly smooth summer, showing signs of rust after opting out of last season due to COVID. If the unanimous All-American plays the way he’s capable of, the Bengals could boast one of the league’s stronger receiving units headlined by the starting trio of Chase, Tee Higgins (67-908-6 as a rookie in 2020) and sixth-year slot man Tyler Boyd.

The Bengals will make the playoffs if … the O line holds up its end of the bargain, keeping Burrow upright and allowing the former Heisman winner to build off last year’s success (albeit in only 10 games). The continued ascension of All-Pro safety Jessie Bates in the secondary and a bounce-back season from two-time 1,000-yard rusher Joe Mixon would also go a long way.

The Bengals will miss the playoffs if … the front seven continues to hemorrhage yards on the ground (they yielded the fourth-most rushing yards per game last season), Burrow plays timid while favoring his surgically-repaired knee and coach Zac Taylor, fearing for his job, lets his desperation show. After feeding their quarterbacks to the wolves in 2020 (fifth-most sacks allowed), the Bengals’ offensive line will need to take a significant step forward to avoid a fourth straight last-place finish in a competitive AFC North. - Jesse Pantuosco, Audacy