It's hard to find a worse quarterback career since 2000 than that of Nathan Peterman.

In only 130 pass attempts, he has thrown 12 interceptions for an astounding interception percentage of 9.2%, and we haven't even mentioned his playoff interception, either. During the same span, he only has three passing touchdowns.

In fact, the terrible nature of his NFL career led to some absolutely incredible statistical discoveries. My personal favorite is just so fun to break down, so here we go:

Nathan Peterman, as previously mentioned, attempted 130 passes throughout his time with the Buffalo Bills. In that time, his passer rating amounted to 32.5 -- an impressively low figure. In fact, Nathan Peterman could have spiked all 130 of those snaps straight into the ground, and his passer rating would, according to Pro Football Reference, calculate as 39.58.

In summary, Peterman could have spiked every pass in his career, and he'd have recorded a higher passer rating.

Fortunately for Peterman, I won't be able to scald him for his lackluster career any longer. Everyone on this inglorious list must have met a few basic qualifications in order to be considered: 1) He must have attempted at least 100 passes during the season in question, and 2) He must have started at least six games.

While none of the seasons below are as horrific as Peterman's overall numbers -- there, I roasted him one more time -- there's no denying that the following campaigns were just awful. 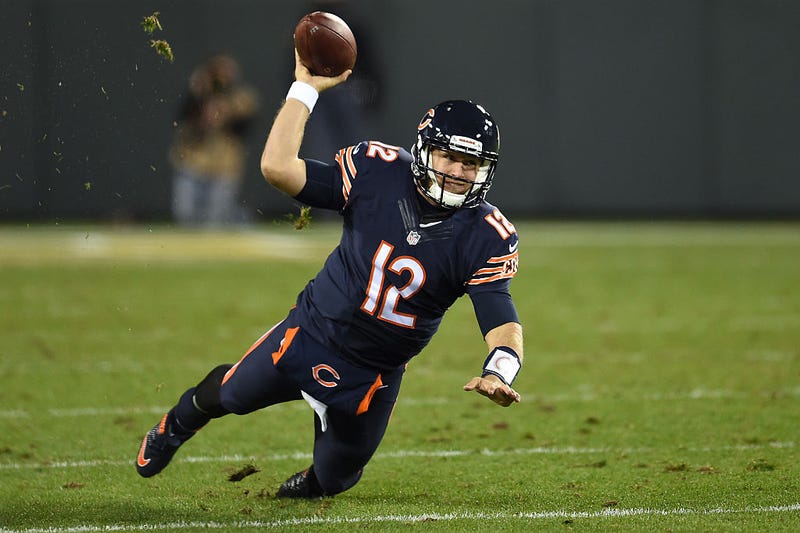 18 turnovers in six starts is a really tough look. His first start of the season, which came in Week 12 after Jay Cutler suffered an injury, was promising enough, considering he went for over 300 yards and three touchdowns and nearly led a late-game comeback (though he did throw two interceptions). His next two games, if less exciting, were better played on his part, as he avoided throwing any interceptions and went 1-1.

Week 15 was arguably the hardest game to evaluate. The bad? He threw three interceptions and lost a fumble against the Packers in a loss. But he did keep the game incredibly close, leading the Bears to a game-tying field goal with under two minutes to go -- it unfortunately wasn't enough to keep the Packers from kicking a game-winner as time expired.

Matt Barkley's 362 passing yards were the most ever by a Bears quarterback vs the Packers (via @EliasSports) pic.twitter.com/cbZ4C9TzOc

With a 1-3 record under his belt, Barkley headed into the final two games of a lost season... and the wheels came off. Five interceptions in Week 16, two more (and a fumble) in Week 17, and Barkley has only played in three games since. 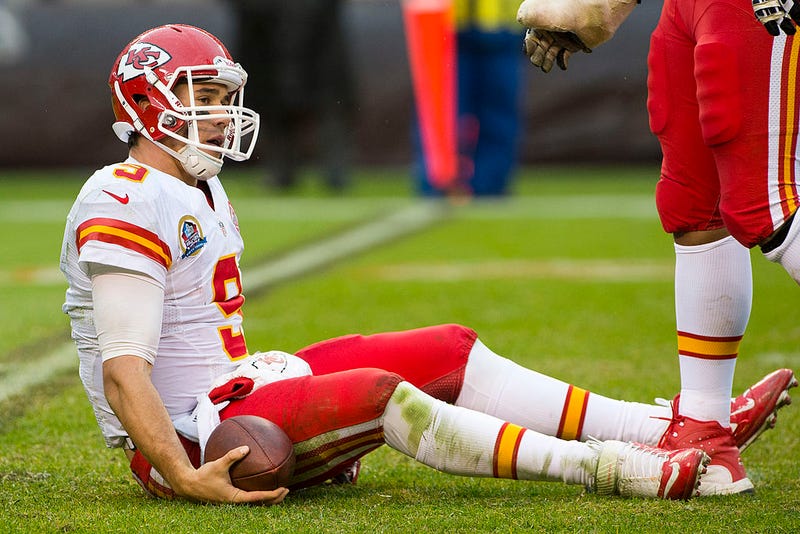 There's a reason Brady Quinn didn't play in any more NFL games after 2012, despite being a member of the Seahawks, Jets, Rams and Dolphins in different capacities. The Notre Dame stud who threw 37 touchdowns and seven interceptions his senior year had only 12 touchdowns in his entire NFL career. However, he easily hit the interception marker, throwing eight in eight starts during the 2012 season.

Only one of the starts can be considered a good outing, in which he completed 19 of 23 passes for 201 yards, two touchdowns and no turnovers. What's crazy to think about is that he started seven other games and didn't throw a single touchdown in any of them. It doesn't come as a shock that the only game he won was in his two-TD contest against the Panthers, going 0-7 in every other game. 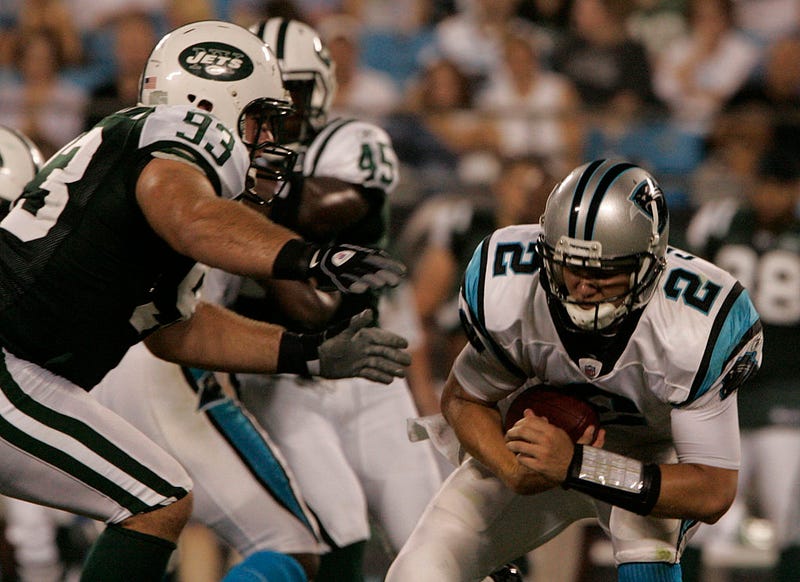 This is not how you want to start out your NFL career, especially as a second-round pick who was touted as a potential early first-rounder heading into the draft. Fumbled snaps, errant throws and bad interactions with teammates -- ahem, ahem, Steve Smith, ahem -- set the tone for what would be a very brief NFL career. It all started in his first career start.

He's one of only six quarterbacks in the history of the NFL to fumble three times in his first game, joining Blaine Gabbert, Gardner Minshew and Nick Foles; however, Clausen is the only guy who lost more than one of those fumbles. He also threw a pick, took a sack for an eight-yard loss and was unable to defeat the Cincinnati Bengals, a 4-12 team in 2010. That's not saying much, however, seeing as Clausen's Panthers were 1-9 in his starts, and 2-14 overall. 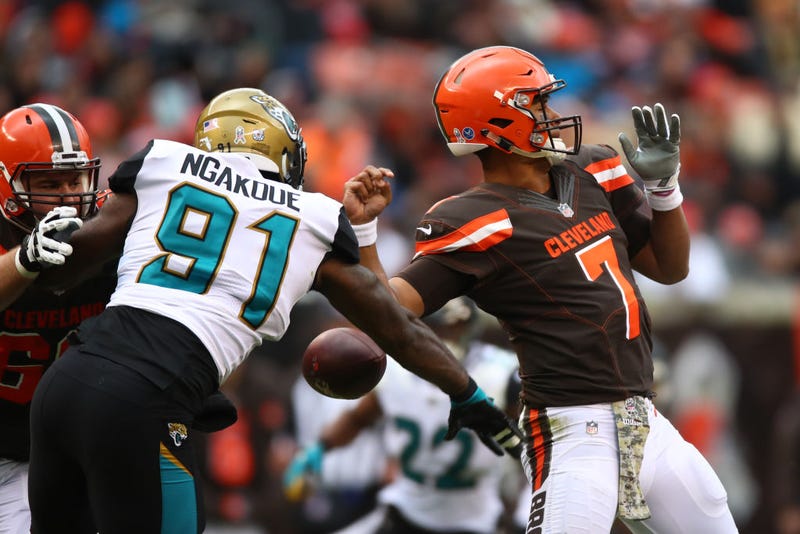 DeShone Kizer gets stripped in a game against the Jaguars. Photo credit (Gregory Shamus/Getty Images)

Speaking of ways you don't want to start your career as a second-round draft pick... Kizer's start was pretty rough. But playing for Hue Jackson's 0-16 Cleveland Browns didn't do Kizer any favors, either. He was asked to boil the ocean, and it just wasn't going to happen.

Still, it's hard to justify a quarterback in any situation turning the ball over 31 times in 15 games, unless you're Jameis Winston and you're also scoring 31 times in that span. DeShone Kizer was not. His best attribute was his legs -- they better have been, considering he led the league in interceptions despite throwing the 19th most passes in the NFL -- but he was a liability when it came to ball security, as well.

DeShone Kizer's awareness in Madden is going to be lower after this play. pic.twitter.com/DH7QcAhmC9

Not great for a guy who once called himself a blend of Tom Brady and Cam Newton. 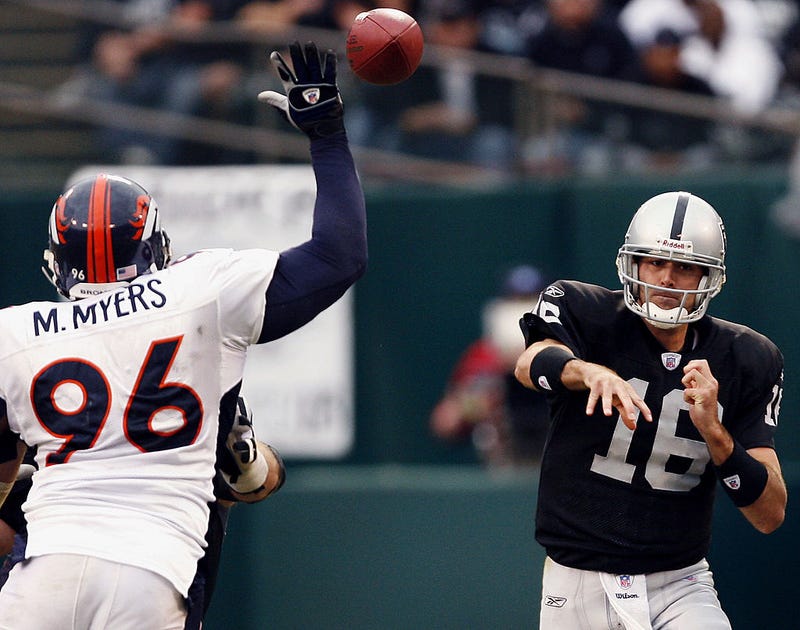 Andrew Walter fires a pass during his rookie season in 2006. Photo credit (Robert B. Stanton/NFLPhotoLibrary)

What Leaf and Clausen didn't do was get sacked 46 times and fumble the ball 13 times, losing 10 of them. Walter started in only one more game after the 2006 season. 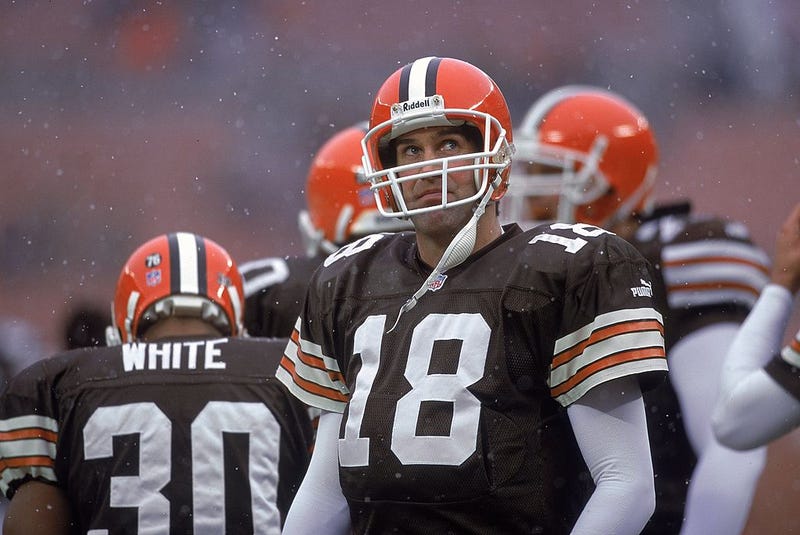 I'm not sure what inspired so much confidence in the Browns after seeing what Pederson, then 32 years old, had done for Philadelphia the season prior in 1999, his first year with starting responsibilities. He went 2-7 in his starts, tossing seven touchdowns and nine interceptions with a low completion percentage (52.4%).

Somehow, it got worse in Cleveland to start the new millennium. He averaged 95 yards gained per game -- yes, really -- and had only one win at the helm for the Browns.

And NFL's Research Twitter page didn't let him forget about it, in since deleted tweets. 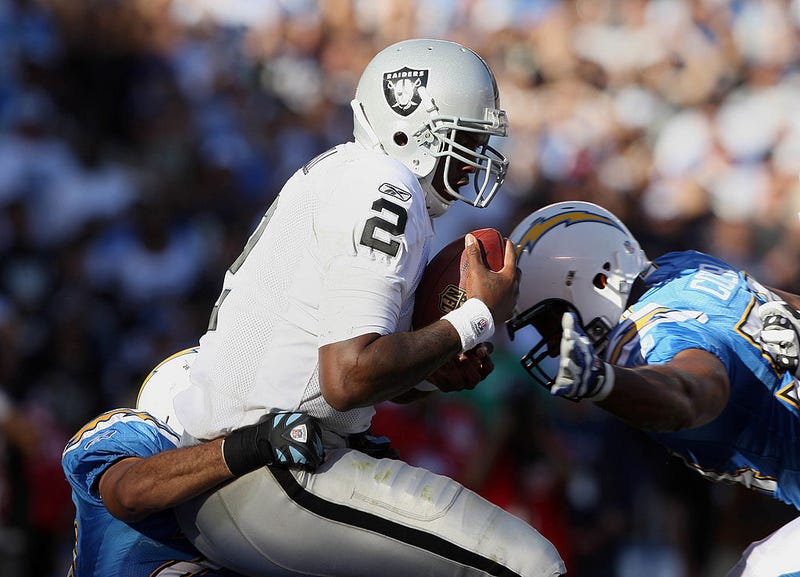 JaMarcus Russell goes down in a game against the Chargers. Photo credit (Donald Miralle/Getty Images)

The bust of all busts, Russell certainly wasn't what the doctor ordered in his first year as a starter for the Raiders in 2008. After all, he was selected with the first overall pick of the 2007 draft after dominating the competition during his third year at LSU.

But leading the Raiders to a 5-10 record in 2008 wasn't the worst that they'd see of Russell; that's what next season was for. He went 2-7 in his starts, proving to be much slower and clumsier (from 7.5 yards per carry in 2008 to 2.4 yards per carry in 2009) than initially expected -- not to mention heavier -- and not doing much to inspire confidence with his arm.

It would be his last year in which he actually played an NFL game. 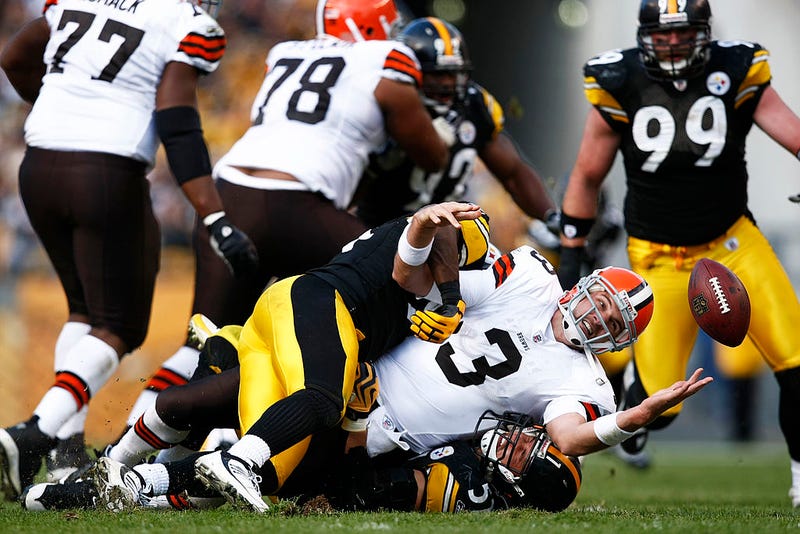 From leading the Browns to a 10-5 record in a Pro Bowl campaign in 2007, to being the least valuable quarterback in the entire NFL (using Pro Football Reference's approximate value metric).

What a transformation it was for Anderson, whose 2007 passer rating (82.5) nearly doubled what he was able to achieve in 2009 (42.1). His adjusted air yards per attempt -- a passing statistic that incorporates passing yardage, sacks, touchdowns and interceptions -- plummeted from 6.7 to 2.7, ranking among the worst we've ever seen.

It would be his last season in Cleveland -- a stint he ended with a bad taste in his mouth --, as he experienced a slight bounce back the following year with the Cardinals and spent the bulk of his remaining career as a back up to Cam Newton. 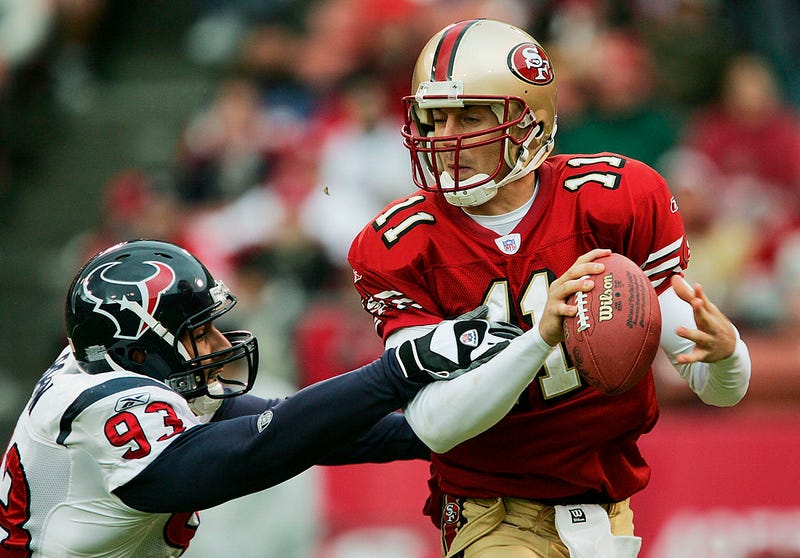 Throughout the 2010s, there were few quarterbacks better at limiting interceptions than Alex Smith. His interception percentage of 1.5% is the fifth-best figure out of 52 quarterbacks who have thrown at least 1,000 passes this decade, trailing only Aaron Rodgers, Tom Brady, Tyrod Taylor and Patrick Mahomes.

That's why it's so crazy that no rookie quarterback in the past 40 years has had a higher interception percentage than Smith did in 2005. The first overall pick made JaMarcus Russell's first season in a starting role (above) look pretty good. His 0.6% touchdown percentage was pathetic. In his first start, we went 9-23 with 74 yards, no touchdowns and four interceptions. The game in which he threw for the most yards -- 185 in a Week 13 matchup with the Cardinals -- was also a game in which he threw for no touchdowns and three interceptions. In fact, he had zero touchdowns and 10 interceptions after six starts, though he finally tallied a score in the final game of an abysmal season.

However, the 49ers knew that he was going through some injuries and that they had just passed up Aaron Rodgers, and so they decided to ride it out a little longer. Luckily, Smith didn't make them regret that decision. His performance throughout his career has nearly made us forget about his horrid debut campaign, and his most recent display of bravery, resilience and perseverance makes it hard for us to criticize him at all.

And congratulations to my friend Alex Smith, for fighting back from a life-threatening injury to start at quarterback again for the Washington Football Team. It’s a testament to his strength, determination and the love and support of his family. https://t.co/R3PO0jjFbf