Dallas Cowboys running back Ezekiel Elliott was on a Hall of Fame-caliber pace through his first four NFL seasons, but the former All-Pro hit a wall in 2020.

Elliott is coming off a season where he averaged a career-low 4.0 yards per carry, while tying a career-high with six fumbles. In what was a disastrous season for the Cowboys -- particularly after Dak Prescott's season-ending ankle injury -- Elliott was unable to be part of the solution for Mike McCarthy and company.

Once a lock to find himself among the top two or three running backs, Elliott finds himself outside of the top 10 this year. It would hardly be shocking if the 26-year-old rebounds this season, though given that he carried the ball over 300 times in three of his first four seasons, he may just be past his peak.

As we wait to see if Elliott re-emerges as one of the game's top rushers, here are our top 10 running backs for the 2021 season: 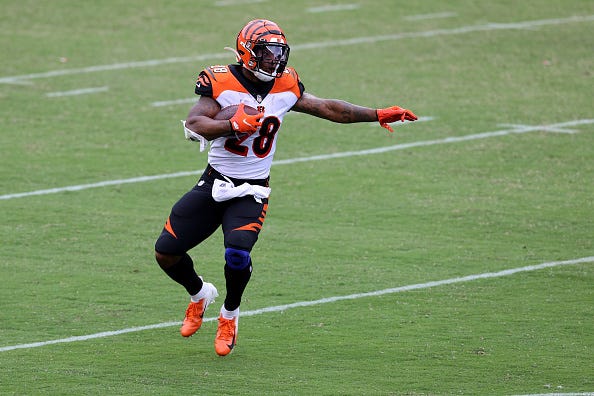 Injuries limited Mixon to just six games a season ago, but the 24-year-old ran for over 1,100 yards in each of the two prior seasons. The Bengals aren't a finished product yet, but playing a full season with Joe Burrow, Ja'Marr Chase and what should be an improved offensive line should allow Mixon to rebound in 2021. 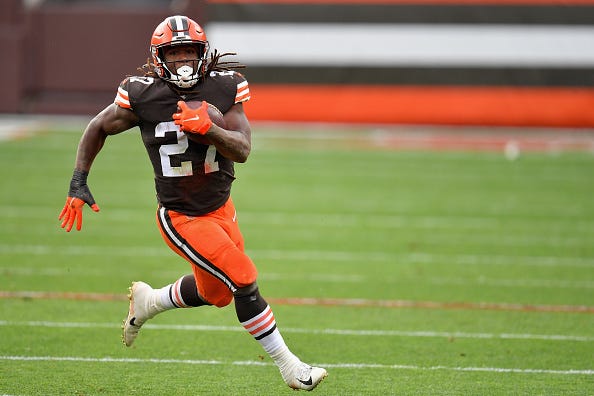 Hunt led the NFL in rushing yards in his rookie season as a member of the Kansas City Chiefs, and despite being the No. 2 back on his own team in 2020, he averaged 4.2 yards per carry and combined for 11 total touchdowns. Though he'd be the top back on just about any other team, Hunt being the 1B to Chubb may allow him to extend his career. 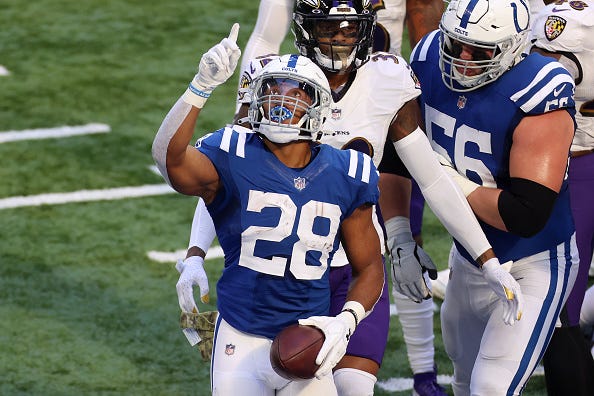 Taylor had an excellent rookie season in Frank Reich's offense, rushing for 1,169 yards, 253 of which came in and win-and-in Week 17 game. From a fantasy standpoint, it's a bit concerning that he'll lose some touches to both Marlon Mack and Nyheim Hines. That said, there's little doubt that he'll be the bell-cow back behind Carson Wentz. 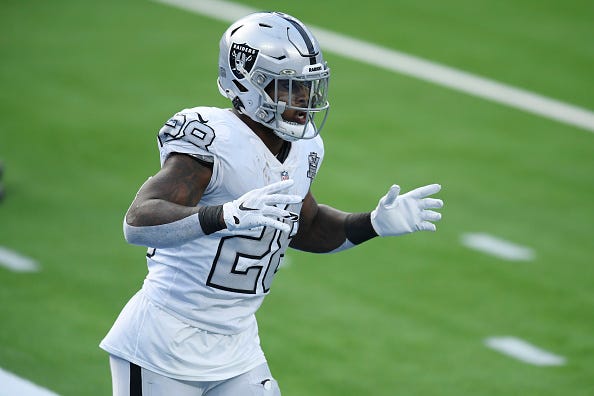 Jacobs is hard to place because he had an excellent rookie season, averaging 4.8 yards per carry in Jon Gruden's offense. However, while the former Alabama star ran for 12 touchdowns in 2020, he regressed to 3.9 yards per carry in his second NFL season. Add in the fact that the Raiders revamped their offensive line this offseason and also signed Kenyan Drake and Jacobs becomes that much more difficult to project. The thought here is he hasn't accumulated enough wear-and-tear at the NFL level yet for him to be declining, so we expect something of a rebound in 2021. 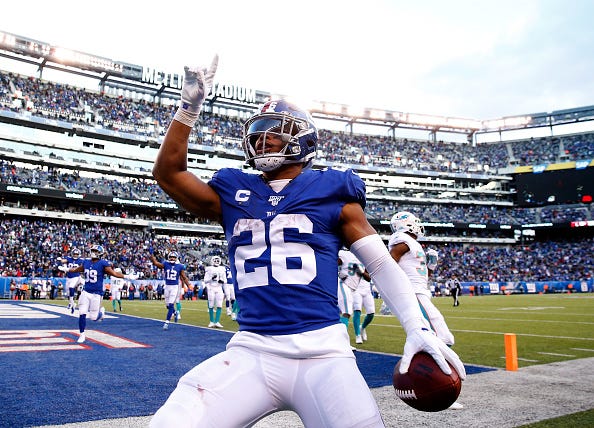 By rushing for over 1,307 yards and hauling in 91 passes in his rookie season, Barkley put together one of the greatest debut campaigns in the history of the league. However, a high-ankle sprain and torn ACL have limited him to just 15 of a possible 32 games over the last two seasons. The 2018 version of Barkley looked like he had a chance to be one of the greatest running backs in NFL history. In year four, he needs to stay on the field and realize that potential. 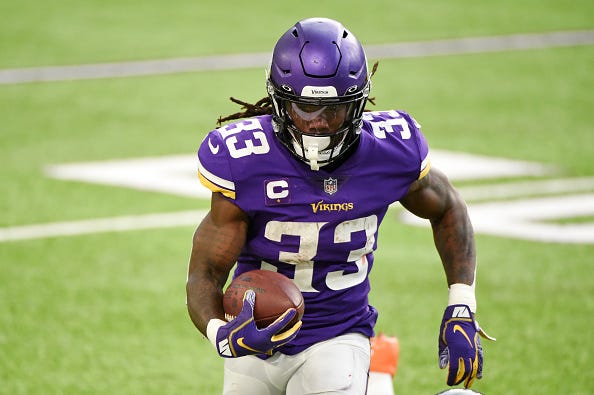 Cook may never be healthy for every game in a given season, but when he's on the field, the Vikings offense runs through him. He's missed four games over the past two seasons, but still managed to rush for 2,692 yards and 29 touchdowns. The scariest thing is that he averaged a career-high 5.0 yards per carry in 2020, which is pretty rare for a running back to do in his fourth season. 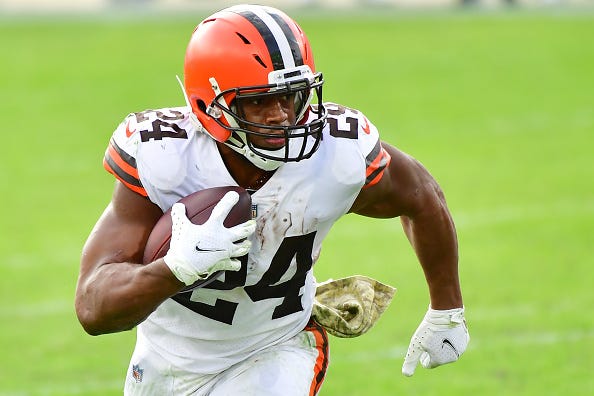 Even with Kareem Hunt under contract beyond 2021, Chubb figures to leave the Browns with a difficult decision on whether to re-sign him when his rookie contract concludes after this season. The former second-round pick is both one of the league's best running backs and also an elite pass blocker for Baker Mayfield. History tells us to be hesitant in betting on the Browns, but it's certainly not impossible to imagine Kevin Stefanski riding Chubb and Hunt to a Super Bowl appearance next February. 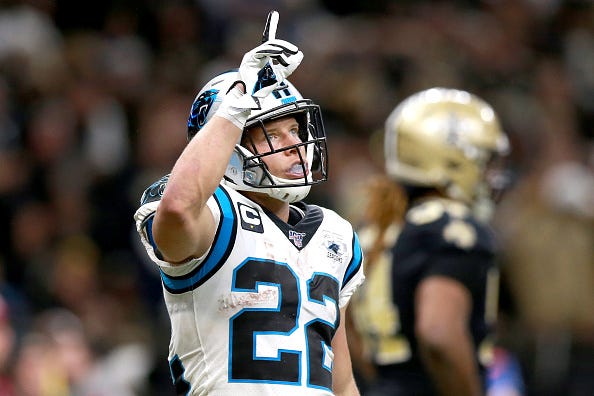 Given his usage rate two seasons ago, you're a little scared to altogether flush last season's injury-riddled campaign from McCaffrey away. That said, the 25-year-old is just two years removed from rushing for over 1,300 yards and topping 1,000 receiving yards. If he's healthy in 2021, McCaffrey may help Joe Brady to land a head coaching job. 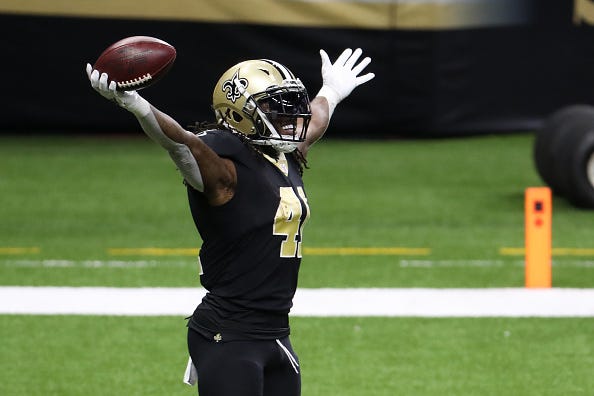 Sean Payton and the Saints have been careful not to run Kamara into the ground, which is one reason we're pretty confident that the fifth-year back will age well. Kamara averaged five yards per carry in 2020, and reached the endzone 21 total times. Whether it's Jameis Winston, Taysom Hill or some combination of the two at quarterback in 2021, we're pretty confident that Kamara will be at the forefront of one of the league's top offensive units. 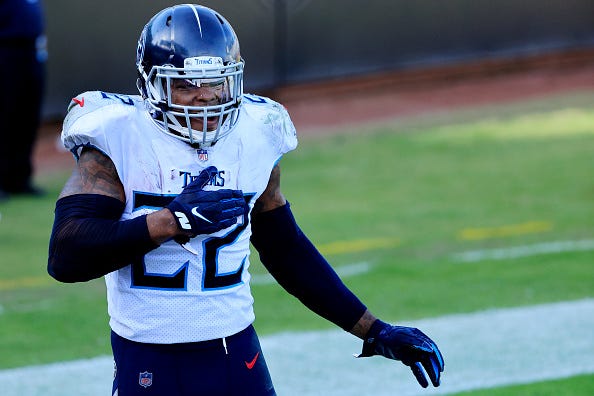