Odell Beckham Jr. has never been one to shy away from making headlines, the only problem is they are not always about his play on the field.

The Cleveland Browns wide receiver burst onto the scene as a rookie with the New York Giants with his one-handed catch, but since that catch, Beckham's career has been a mixture of jaw-dropping plays and controversial moments.

No matter what Beckham does, or where he plays, controversy seems to follow him. Since being drafted by the Giants in 2014, he has had no shortage of infamous moments in his NFL career. Let's take a look at some of them:

This Week 15 matchup on Dec. 20, 2015 marked the beginning of a reckless rivalry between Odell Beckham Jr. and Josh Norman. Prior to the game, Norman and teammate Marcus Ball were wielding a baseball bat on the field, which Beckham perceived was to intimidate him. Things only escalated further during the game. Beckham drew three personal fouls and Norman two, highlighted by an intentional helmet-to-helmet hit Beckham delivered to Norman at the end of a play, which resulted in a one-game suspension for Beckham. This game also featured Beckham walking over Norman in Kobe Bryant-like fashion after scoring a TD, but Norman got the last laugh in a Panthers win.

Odell Beckham Jr. has had a rough first half. Keep him away from the kicking nets. https://t.co/ZyqH3l1meK pic.twitter.com/ejs8AgX3qc

Beckham has always worn his emotions on his sleeves, which has been both good and bad for him. In a Week 3 matchup with the Washington Redskins on Sept. 25, 2016, Beckham – who was being guarded by Norman during the game, mind you – let his frustrations boil over on the sideline following an Eli Manning interception and swung his helmet at the kicking net. The net fell down and hit Beckham in the face, resulting in a not-so-friendly viral moment for the star receiver. Media reacted to the incident by calling it a tantrum, and further raised questions about whether or not Beckham's behavior was becoming a problem. 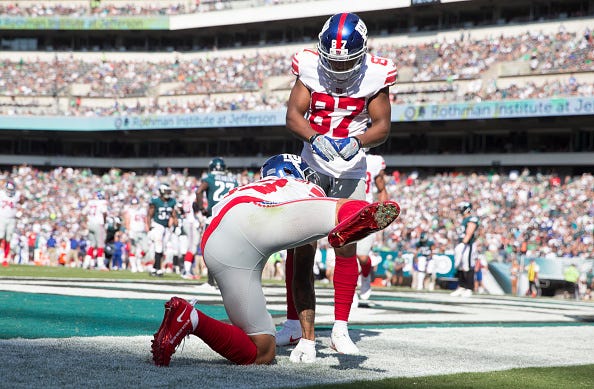 Beckham caused quite the controversy in a Week 3 game against the Philadelphia Eagles on Sept. 25, 2017. After catching a TD pass to put the Giants ahead early, Beckham got down on all fours and lifted his leg up pretending to urinate like a dog. He was penalized on the play, which was described as "classless act" by FOX announcer Joe Buck. When asked after the game, Beckham simply said, "I'm a dog. So I acted like a dog." It was not until the next day he said it was done as a response to Donald Trump, who referred to any NFL player who protests during the national anthem as a "son of a bitch." The celebration did not go over well with Giants owner John Mara, and the league fined him $12,000.

In March of 2018, with the receiver hoping for a contract extension with the Giants, a video surfaced of Beckham in a Paris hotel bed holding what appears to be a blunt in his hand, with white powder that looks like cocaine on the bed alongside a woman and some pizza. The woman, who posted the seven-second clip on Snapchat, came forward that Beckham did not partake in drugs, but the Giants were not thrilled with the video. Trade rumors began to surface in the ensuing weeks, but he was not dealt and the two side agreed on an extension before the start of the 2018 season.

Beckham continued to generate controversy after he was traded to the Browns. In addition to accusing the Giants of trying to sabotage his career, the receiver wore a $350,000 watch in his first game, a 43-13 loss, violating league policy that prohibits wearing hard objects. He was not disciplined for it, but this wasn't his only uniform violation. He was fined $14,000 for wearing pants that came above the knee in Week 6. He was also told to remove his Joker-themed cleats at halftime of Week 9 or else he would not be able to play the remainder of the game.

Beckham's one-handed catch against the Dallas Cowboys catapulted him into stardom, but the infamous Giants wide receiver boat trip may be his lasting legacy. The Giants reached the playoffs in 2017, but on their off day following the end of the regular season, Beckham and the receivers went to Miami to hang out on a boat with Trey Songz, and were reportedly partying that night with Justin Bieber and other celebs. Victor Cruz first posted the infamous photo on his Instagram before deleting it, but the damage was already done and the boy band-esque photo began to circulate through the media. The story of the boat followed the Giants all week leading up to their game against the Green Bay Packers. Beckham dropped three passes and finished with four catches for 28 yards in a 38-13 loss in his lone playoff appearance. Afterward, he caused even more controversy when he reportedly punched a hole in the wall outside the visitors locker room at Lambeau Field.