The 2019 NFL season began with only one quarterback from the rookie draft class starting Week 1 — Arizona Cardinals quarterback Kyler Murray — but it was not long before that all changed.

Ten rookie quarterbacks in all took snaps this season, which is three more than last year and most since 2016.

It led to the introduction of guys named Gardner, "Duck," and Blough to the football lexicon, while the more familiar names, such as Murray, Jones and Haskins, also got to show what they can be capable of in the NFL.

Of the 10 rookie quarterbacks who appeared in this season, seven of them had at least 100 snaps. While it's still a small sample size for some, we took a look at how those seven fared in their first season in the NFL. 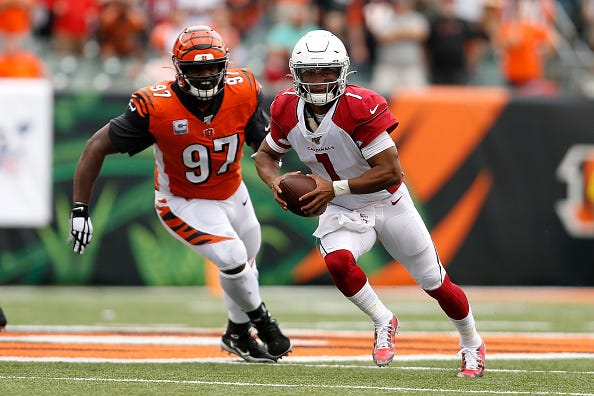 Expectations were high for Kyler Murray entering the season, but he still showed flashes of why he was the top pick in the 2019 draft. Murray threw 20 touchdown passes and led all rookies with 3,722 passing yards and displayed his dual-threat ability with 544 rushing yards and four rushing TDs. His signature game came in Week 6 when he completed 72 percent of his passes for 340 yards and three TDs in a 34-33 win over the Atlanta Falcons. However, Murray struggled with turnovers and consistency. He tossed 12 interceptions and finished with fewer than 200 passing yards six times. Despite his elusive speed, he was also sacked 48 times. Still, the promise is there, the Cardinals now need to surround him with the right weapons. 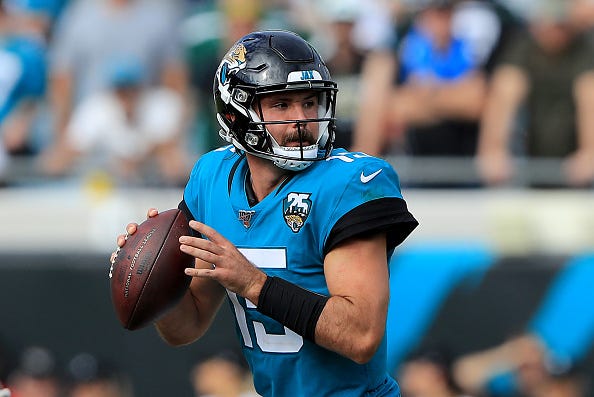 The sixth-round pick out of Washington State was not expected to be a factor in the 2019 season, but then Jaguars QB Nick Foles went down with an injury and Minshew Mania ensued in Jacksonville. The mustachioed quarterback was the darling of the NFL ithrough the first five weeks — tossing nine TDs to just one interception — but the magic soon began to wear off. Minshew went back-to-back games in October completing fewer than 50 percent of his pass attempts. His poor performance in London against the Texans in Week 9 made the decision for the Jaguars to return to Foles easier. Yet, Foles also struggled upon his return and Minshew was back under center by the start of December. His overall numbers on the season were impressive — 3,271 yards and 21 TDs to just six interceptions — and he had the Jaguars in the hunt before relegated to the bench. Not too bad for a guy very few fans knew about before the start of the season. 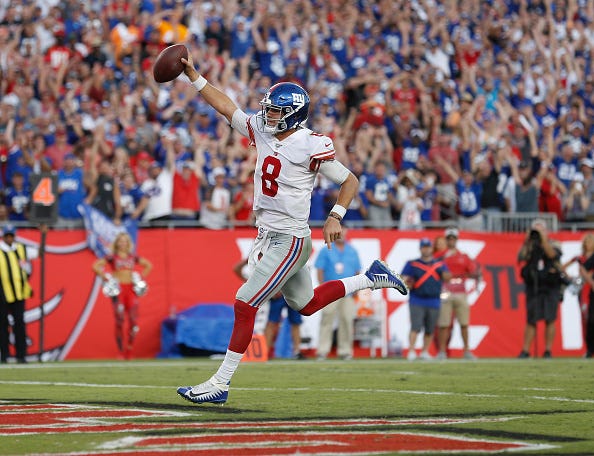 The heir to Eli Manning began his NFL career with fans angry that the Giants would dare take a Duke quarterback with the No. 6 overall pick, but he finished his debut season as the rookie leader in TD passes with 24, and gained the full support of the fan base as he offered some hope and promise for the future. However, after Jones came firing out of the gate leading the Giants to two wins in his first two starts, the struggles came. Jones and the Giants lost eight straight games and the rookie did not go a single game without turning the ball over, finishing with 12 interceptions and an astounding 18 fumbles, 11 of which he lost. Despite the struggles, Jones finished the season strong with two 300-plus yard passing games to eclipse 3,000 passing yards on the season and showed glimpses of what his ceiling could look like. 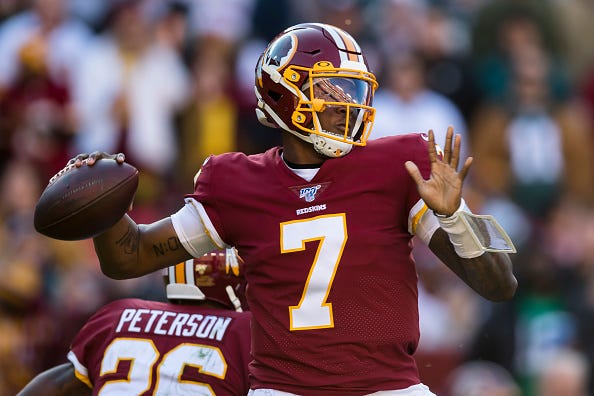 The Redskins threw Haskins into the fire much sooner than originally planned, and it showed. The 15th overall pick in the draft looked like he was not ready his first few games, but an injury to Case Keenum forced the team’s hand to keep playing him and just deal with whatever growing pains come along the way — and there were plenty. But Haskins started to show some signs in his last few games. In Week 15 against the Eagles, he threw for a season-best 261 yards and two touchdowns, and before he exited with an injury against the Giants, he had completed 80 percent of his pass attempts and had two touchdowns for 133 yards. He rekindled his chemistry with former Ohio State teammate Terry McLaurin, connecting with him for 273 yards and two TDs in his last three games. However, Haskins is still a work in progress and there is a lot more for him left to show, but the potential is there under the right coaching staff and system. 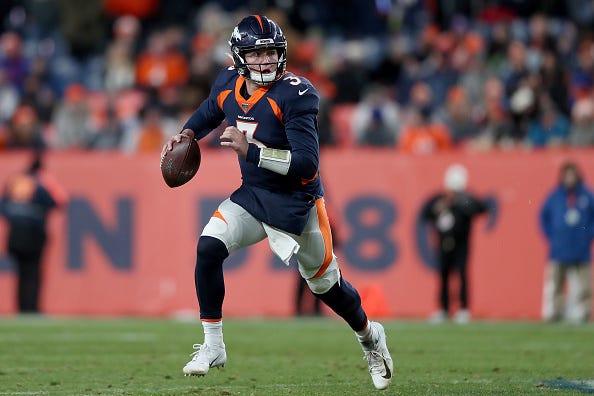 The Broncos’ second-round pick did not get into a game until Week 13, so it is a little more difficult to gauge his success compared to the others. Lock looked legit in his first two games, combining to threw five TDs to two interceptions. On the road against the Texans, Lock threw for 309 yards and three touchdowns and completed 22 of 27 pass attempts. But his next two games were not quite as successful — which included a road game in the snow in Kansas City — combining for just one TD and one interception. He failed to throw more than one TD in any of his last three games, although he did limit his turnovers. Through just five games, it's still hard to know if Lock is anything more than a game manager or a franchise quarterback. 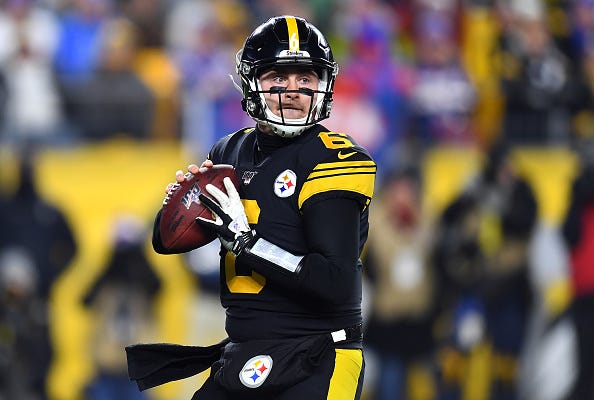 Hodges went undrafted and was signed to the Pittsburgh Steelers’ practice squad, so he was not really on anyone’s radar. Yet, he was forced to step in with injuries to Ben Roethlisberger and Mason Rudolph. Hodges proved to be an ideal game manager for the Steelers, who rely more heavily on their running game and defense, and was given the nod to continue starting when Rudolph returned. However, he failed to throw for more than 100 yards in either of his final two games, and was even pulled for Rudolph in a Week 16 loss to the Jets. The poor quarterback play down the stretch may have cost the Steelers a playoff spot. 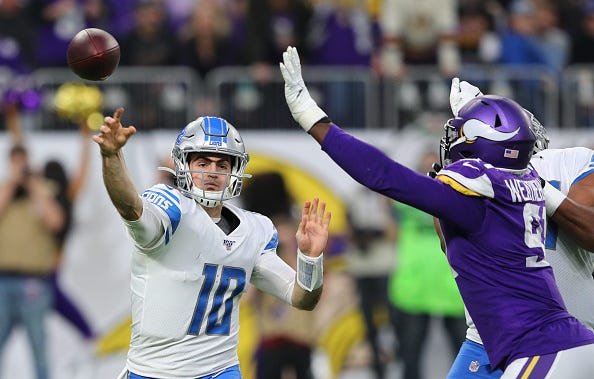 David Blough was another practice squad player who was thrust into a starting role following the injuries to Matthew Stafford and Jeff Driskel. Blough looked pretty good in his debut — a Thanksgiving matchup against the Bears — but has been rather mediocre at best in the games he played this year. He had a knack for the occasional big play, but failed to do enough to win a game in the five games he started, finishing the season with four TDs to six interceptions.