We view the market for quarterbacks in the NFL Draft one way on Jan. 27, but it's entirely possible that by the time the real thing begins on April 29, the landscape will look entirely different.

Matthew Stafford appears to be the only veteran quarterback sure to be traded this offseason, though the possibility certainly exists with Deshaun Watson, Sam Darnold, Carson Wentz and Jimmy Garoppolo. While it seems pretty unlikely that the Green Bay Packers and Aaron Rodgers will split up this offseason, Derek Carr, Marcus Mariota, Gardner Minshew and Tua Tagovailoa are other starting-caliber options perhaps not likely to be traded, but who shouldn't be ruled out entirely.

In addition to the trade market, Dak Prescott, Cam Newton and Jameis Winston could highlight a free-agent market with a few starting-caliber options as well.

So, for the time being, we're going to operate on what we know now, with the understanding that things can and will change, and some of the teams we currently believe could use their first-round picks on quarterbacks won't ultimately need to. 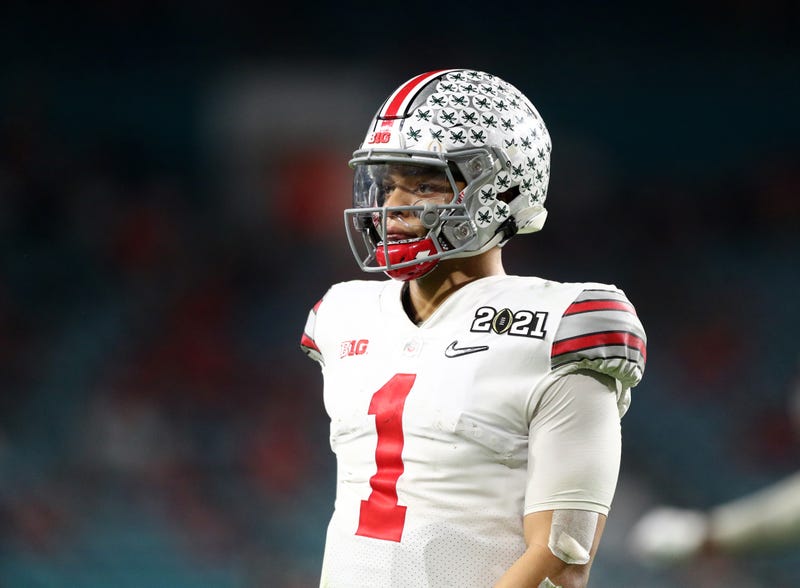 Will Justin Fields be taken with the No. 2 pick? Photo credit (Mark J. Rebilas/USA Today)

You can essentially write it in stone - Urban Meyer and the Jaguars will take Trevor Lawrence with the top pick. At No. 2, Jets general manager Joe Douglas could go in a variety of directions. He could select former Ohio State quarterback Justin Fields, who tossed 67 touchdowns and ran for over 1,100 yards in three collegiate seasons. That said, after a breakout year, some believe that BYU quarterback Zach Wilson is the second-best quarterback prospect in this year's class. The possibility also exists that the Jets run things back with Sam Darnold for another season, hoping that in his fourth NFL season, he'll be able to stay healthy and improve away from Adam Gase. We're going to project that the Jets take Fields and trade Darnold, but the wild card of trading this pick for Houston Texans quarterback Deshaun Watson - apparently a fan of new head coach Robert Saleh - makes this one of the most intriguing storylines in this year's draft. 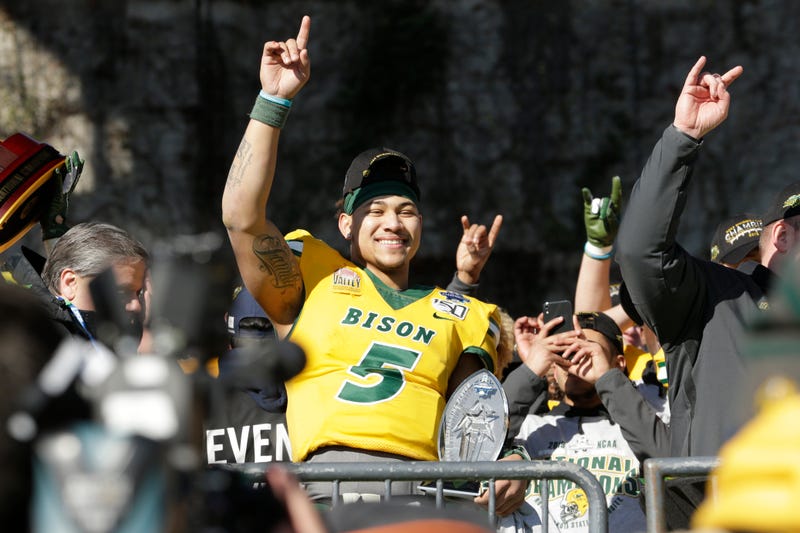 Trey Lance is one of the many intriguing quarterback prospects in this year's draft class. Photo credit (Tim Heitman/USA Today)

It appears to be a matter of when, not if, the Lions trade former No. 1 overall pick Matthew Stafford this offseason. With Kenny Golladay and Marvin Jones Jr. also set to hit free agency, the Lions appear destined for a few very lean years. That may mean signing a bridge quarterback and simply taking whoever they believe is the best player at this position, regardless of position. We're going to bet, though, that the trio of Chris Spielman, Brad Holmes and Dan Campbell will want to get the quarterback situation figured out. If Lance is still on the board at pick No. 7, he'd be an intriguing selection after tossing 28 touchdowns to zero interceptions in 2019, while rushing for 1,110 yards. 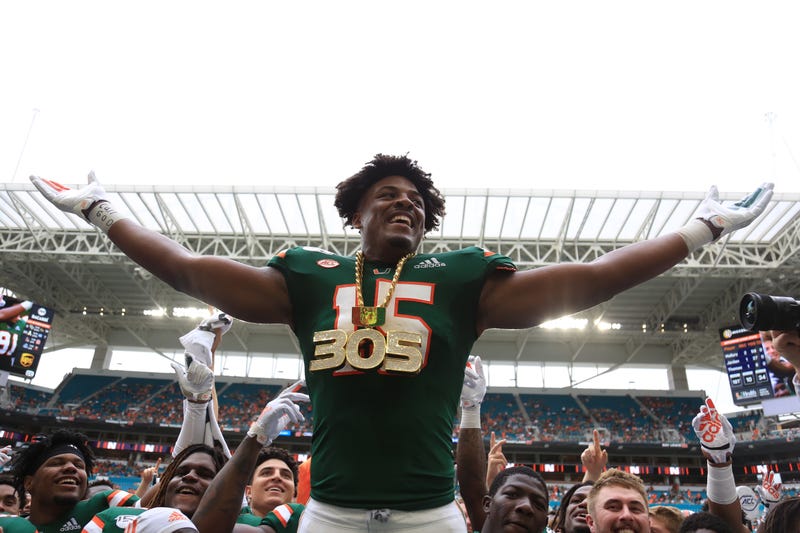 In a make-or-break year for Daniel Jones, it would be hard to fault Dave Gettleman and company for drafting Jaylen Waddle at pick No. 11. That said, the most pressing need on the roster is for an edge rusher. Rousseau opted out of the 2020 NCAA season because of COVID-19, but had 15 1/2 sacks and 19 1/2 tackles for loss in 2019. The Miami product would be an excellent fit for Joe Judge's squad. 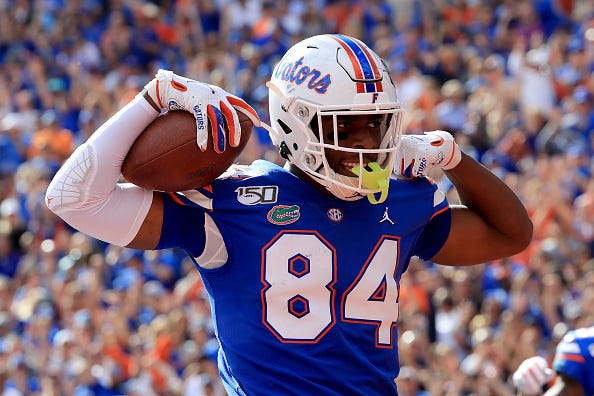 Either the Los Angeles Chargers or the New England Patriots could be suitors for Florida product Kyle Pitts, but if he makes it to the 16th pick, it's very exciting to think about him in an offense that already includes Kyler Murray, DeAndre Hopkins and Christian Kirk. In his junior season at Florida, Pitts averaged 17.9 yards per reception and hauled in 12 touchdown passes. At 6-foot-6, Pitts has a chance to be a star at the NFL level and push Arizona into the postseason in 2021. 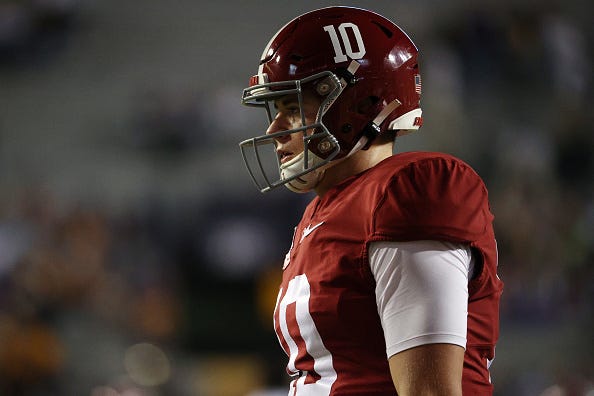 Will Mac Jones have success away from Alabama? Photo credit (Chris Graythen/Getty Images)

Among other available veteran quarterbacks this offseason, we believe that Matthew Stafford would make a ton of sense for the Colts. If such a deal comes to pass, the Colts obviously won't take a quarterback here - heck, they may not even have the pick. For the time being, we're going to plug in Alabama's Mac Jones, who threw for 4,500 yards and 41 touchdown passes. After an underwhelming rookie year from Tua Tagovailoa, it is a little fair to be skeptical about the fact that Jones had Jerry Jeudy, Henry Ruggs III, Devonta Smith and Jaylen Waddle to throw to over the past two seasons. Trying to project what Alabama quarterbacks will be at the NFL level isn't an enviable task. But Jones is expected to be a first-round pick, and for the time being, the Colts have a need. 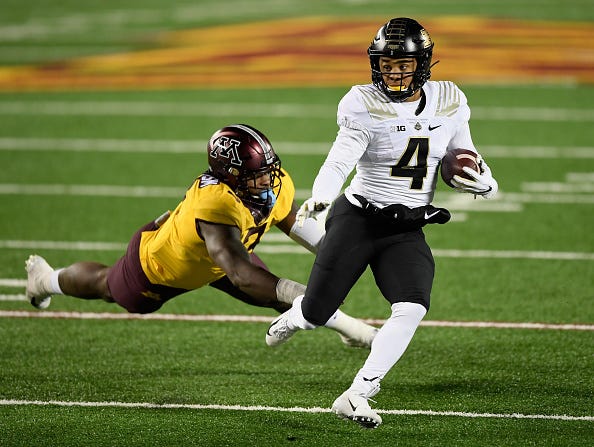 Famously - or infamously, depending on your perspective - the Packers traded up and selected Jordan Love in the 2020 NFL Draft, rather than adding another weapon for Aaron Rodgers. Matt LaFleur's offense being Devante Adams-centric worked during his All-Pro regular season, but by the NFC Championship Game, knowing Rodgers was 100% going to look for Adams in every big moment became a little too predictable. One of the players that the Packers passed on late in the first round last year was Laviska Shenault Jr., who immediately became a multi-purpose weapon in the Jacksonville Jaguars offense. Kyle Crabbs of The Draft Network says that Moore fits a similar mold as a "swiss-army knife," one that could make an impact in the offense and on special teams. He'd help add juice to the team.