For two weeks, the Seattle Seahawks were at No. 1 in our RADIO.COM Sports NFL Power Rankings, but that felt more indicative of what Russell Wilson has done this season than what Pete Carroll's team is as a whole.

The Seahawks slipped up in Week 6, blowing a 10-point lead in the fourth quarter of an eventual overtime loss to Kyler Murray and the Arizona Cardinals on Sunday Night Football. But their offense still scored 34 points. Perhaps you can wonder why Carroll didn't let Wilson cook sooner, but unleashing the offense has proven to be a stroke of genius, as the Seahawks are averaging over 33 points per game in 2020.

Even in a game where Wilson was picked off three times, the future Hall of Famer still threw for 388 yards and tossed three touchdowns, all of which were caught by Tyler Lockett in a career game.

The problem is that for as much as you associate Carroll's Seahawks teams with playing great defense, they've been abysmal on that side of the ball this year. Through six games, the Seahawks are allowing a league-worst 479.2 yards per game, and opponents are averaging 28.6 points per game against them. It's at the point where if the Seahawks don't score 30 plus points per game, their chances of winning seem pretty slim.

Because of the iconic stretch that Wilson is in the midst of right now, you feel like the team's offensive output is fairly sustainable, which is crazy to think about. But will that formula be effective enough to keep the Seahawks as the top seed in the NFC and allow them to win multiple games in January? That's less clear.

The Seahawks are still very much among the elite team's in the NFL, but they need Jamal Adams back, and could stand to make another impact addition to their defense before the Nov. 3 trade deadline.

Here are our full RADIO.COM Sports NFL Power Rankings ahead of Week 8 of the 2020 NFL season: 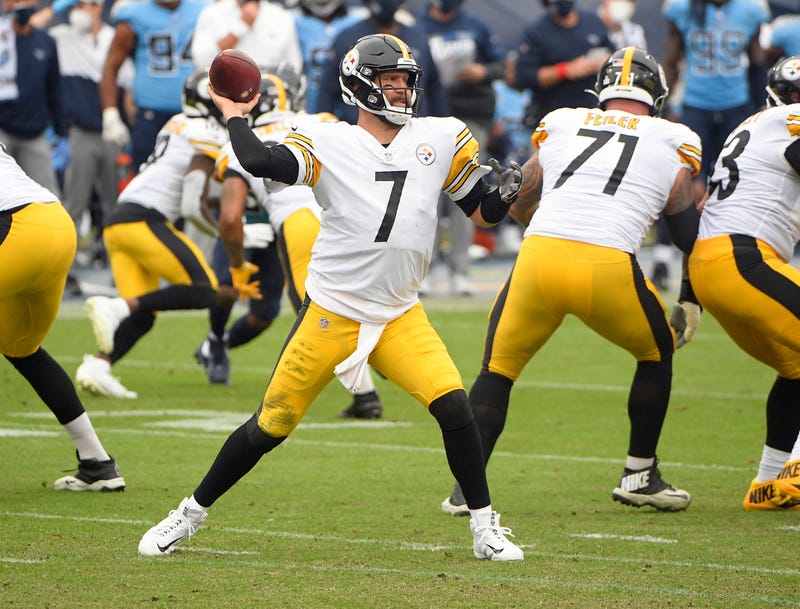 There maybe isn't an Antonio Brown or Le'Veon Bell, but this Steelers team is one of the deepest groups that Mike Tomlin and Ben Roethlisberger have had together. Much has been made of the team's elite defensive talent, but the offense flexed it's depth in a Week 7 win over the previously undefeated Tennessee Titans as well. After back-to-back explosive performances, Chase Claypool was used largely as a decoy this past Sunday, catching just one pass for -2 yards. Still, the Steelers moved the ball effectively, as both JuJu Smith-Schuster and Diontae Johnson had nine catches. Ray-Ray McCloud is a gadget weapon in the offense, one that it feels like the team will continue to lean on more as the season goes on. After an underwhelming 2019, James Connor is averaging 4.7 yards per rush in 2020. If the Steelers come through with a convincing victory in Week 8 in Baltimore, it's possible they'll jump to the top spot. 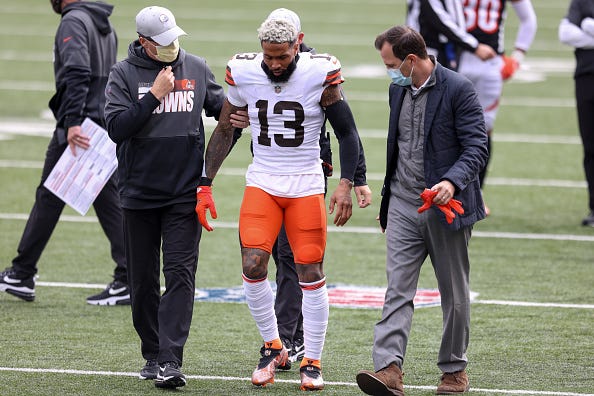 Odell Beckham Jr. is out for the season. Photo credit (Justin Casterline/Getty Images)

What Does Loss of Odell Beckham Jr. Mean for Browns?

Odell Beckham Jr. had three touchdowns - two receiving, one rushing - in the Browns' 49-38 victory in Dallas in Week 4. At that moment, it felt like the Browns had figured out how to utilize one of the most explosive weapons in the sport. However, Beckham had just 83 receiving yards in the following two weeks, and suffered a season-ending torn ACL in Week 7. After Beckham left, Baker Mayfield had arguably the best game of his career, completing nearly 80 percent of his passes and tossing five touchdowns. No team improves with the loss of Beckham, but you wonder if Mayfield won't be at peace without feeling like he has to involve Beckham. Even without him, the Browns still have Jarvis Landry, Austin Hooper and David Njoku, among others, in the passing game. As we inch closer to the return of Nick Chubb, Kareem Hunt also continues to be a valuable weapon on the ground and out of the backfield. Of course, they didn't want to lose Beckham. But the loss of the star wideout hardly dashes the hopes of a playoff berth for the first time since 2002 in Cleveland. 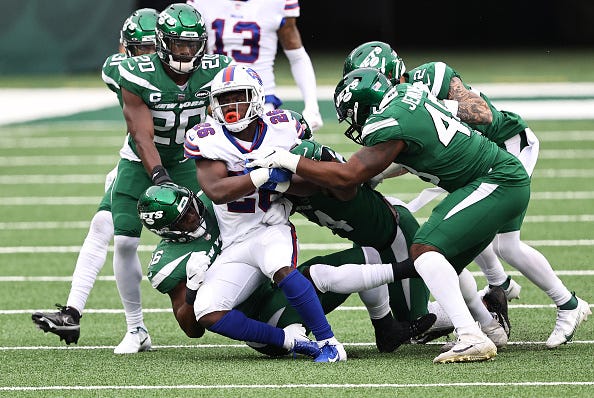 Devin Singletary and the Bills have struggled to get things going on the ground in 2020. Photo credit (Elsa/Getty Images)

Since 4–0 Start, Bills Have Been Pretty Underwhelming

After the first four weeks of the season, the Bills were 4-0 and Josh Allen was one of the top NFL MVP candidates. When we update that race at the halfway point of the 2020 season, Allen will be lucky to be in the top five. That said, after two consecutive losses and a underwhelming win over the lowly New York Jets, Allen is far from the team's biggest concern. The Bills are allowing 126.7 yards per game on the ground, and aren't returning the favor with their own running game. At 97.0 rushing yards per game, the the Bills have the 29th-ranked rushing attack in the league. After an impressive rookie season where he average 5.1 yards per carry, Devin Singletary has regressed to 3.8 yards per carry in his sophomore campaign. Third-round pick Zack Moss has been relatively underwhelming in his rookie season, though he did rush for 47 yards on seven carries in Week 7, so perhaps that's a sign that his role is going to expand in the second half of the season. As is, the Bills are the favorite to win a pretty hapless AFC East, but to make any sort of playoff run, they'll need to rely less on Allen to be a superstar every week. 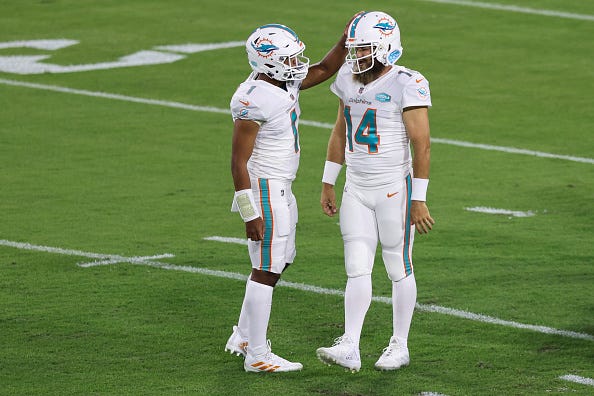 The Dolphins have won three of their last four games, including outscoring the San Francisco 49ers and division-rival New York Jets 67-17 in over their last two games. Still, it was hardly a quiet bye week in Miami, as the team made the decision to turn to No. 5 overall pick Tua Tagovailoa. The move was inevitable, but the timing was pretty surprising. Ryan Fitzpatrick was in a hot stretch, and seemed distraught by the news. In five years, we won't wonder whether the Dolphins should have stuck with a 37-year-old journeyman. But might we wonder if Brian Flores should have waited an extra week or two if the Dolphins get off to a slow start against the Rams in Week 9? Fitzpatrick was bound to go cold, that's what he's done his entire career. If the Dolphins had waited for that, it would have made for a pretty smooth transition. Now, you wonder if there will be some on the team that feel Fitzpatrick didn't get a fair shake, even if we knew that him being benched was coming at some point. 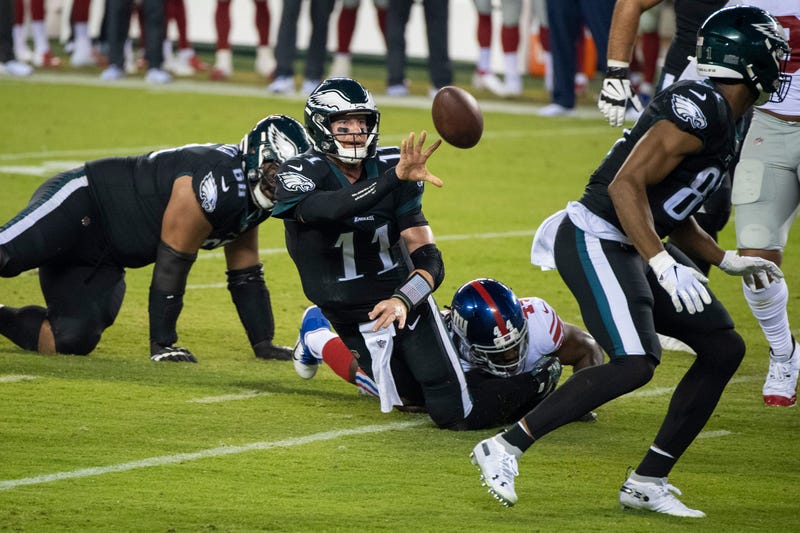 At 2-4-1, the Eagles, We Guess, Are Favorites to Host a Playoff Game

For the first time in close to 20 years, the Eagles look like a roster that needs to be completely overhauled. For a few years now, the wide receiving corps has been underwhelming. A once-stout offensive line got old in a hurry, and needs to be rebuilt, rather than continuing to attempt to get one more year out of Jason Peters. Jim Schwartz's defense has had some impressive moments, but they're giving up 28 points per game, and led by Fletcher Cox and Brandon Graham, two players almost certainly closer to the end of their respective peaks than the beginning. Because of the state of the NFC East, the Eagles may win the division for the second consecutive season, and third time in four years. They can't, however, let a home playoff game fool them - this isn't a team that's close to competing for a Super Bowl, and they need to operate with that in mind next offseason. 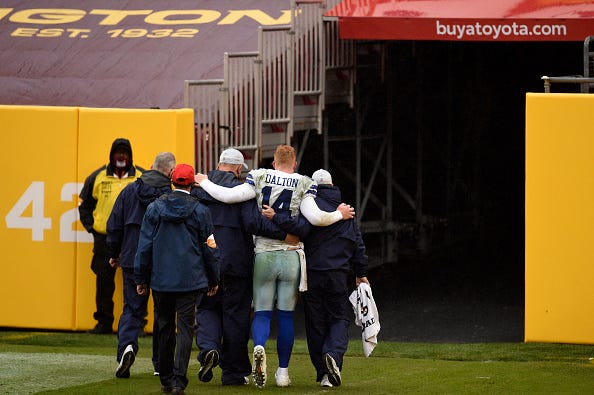 Once seen as a potential Super Bowl contender, the Cowboys' first season under Mike McCarthy has turned into a disaster, with Andy Dalton getting concussed on a dirty hit - one that drew next-to-no reaction from his teammates - in a 25-3 loss to the Washington Football Team. To make matters worse, the Cowboys are set to play their second nationally-televised game in three weeks in Week 8, as they'll travel to Philadelphia to play on Sunday Night Football. If Dalton can't clear concussion protocol, Ben DiNucci will start for the Cowboys, aided by a defense that's given up 34.7 points per game in 2020. Things are ugly in Dallas right now, and it seems that they could get even worse in the coming weeks.