The only thing that's predictable about the NFL every year is that it will be unpredictable. If you knew that the Arizona Cardinals would be the only undefeated team left in the NFL after four weeks of the regular season, congratulations, but I don't believe you. If you thought that the Chiefs would be in sole possession of last place in the AFC West... no, you didn't. If you thought that the Urban Meyer experiment in Jacksonville would experience such major problems so early on, then — okay, maybe you really did think that would happen.

It's always fun, then, to think back to our expectations at the start of the season, even if it was only four weeks ago, and see just how much our ideas have shifted. How right we were. How wrong we were. Who is performing surprisingly well, or surprisingly poorly. And fortunately, Pro Football Focus provides a great database of statistics and analysis that we can do to accomplish all of those things.

Now that we're about a quarter of the way through the season — the 17-game schedule really ruined the nice fractional breakdown of the schedule after four contests, but I digress — let's take an initial look at some of the notable, unexpected, strange, etc. from PFF's massive index of rankings and metrics. 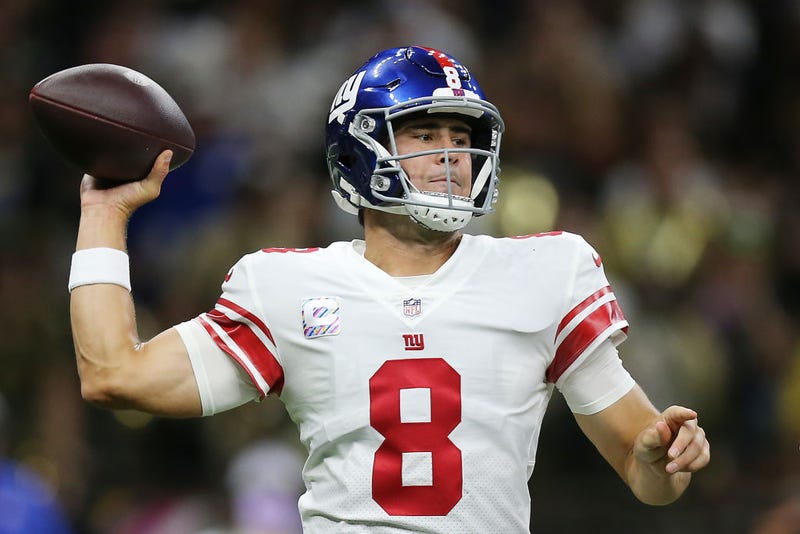 — Daniel Jones is ranked in the top five of all quarterbacks with an overall grade of 86.9, which is a phrase many Giants fans never thought they'd hear. His passing grade is even higher (88.0) and is second in all of football, and the counting stats can help to show why. Though they only have the 14th most attempts through the air, Jones has led the Giants to the seventh most passing yards to this point while only throwing one interception. He also has 188 yards on 27 attempts, though his PFF running grade (58.3) actually hurts his overall grade.

The longest active NFL streak of consecutive starts with a 90+ Passer Rating is 5.

Who has done this?

— Who has a higher passing grade than Jones and his 88.0 mark? 44-year-old Tom Brady, of course, who is legitimately unfair at this point. No one his age should do these things, and no matter how many times we say it, it remains incredible.

— Alternatively, some names that we're used to seeing toward the top are trending in the other direction. Patrick Mahomes, who has never had a grade below 90.0 as a starter, is at 82.2 right now, just outside the top 10. Aaron Rodgers, who finished outside the top 10 only once in his career (No. 12 in 2015) and was the highest-graded QB last season, currently boasts a grade of 68.9. That's good for 26th place, below names like Andy Dalton and Mac Jones. Ben Roethlisberger is the worst non-rookie QB with a grade of 53.8, with only Davis Mills (35.1) below him. That one shouldn't come as much of a surprise, though, if you've watched some Steelers games this year.

It's been a good run, Big Ben. pic.twitter.com/f9mHRfUgcT 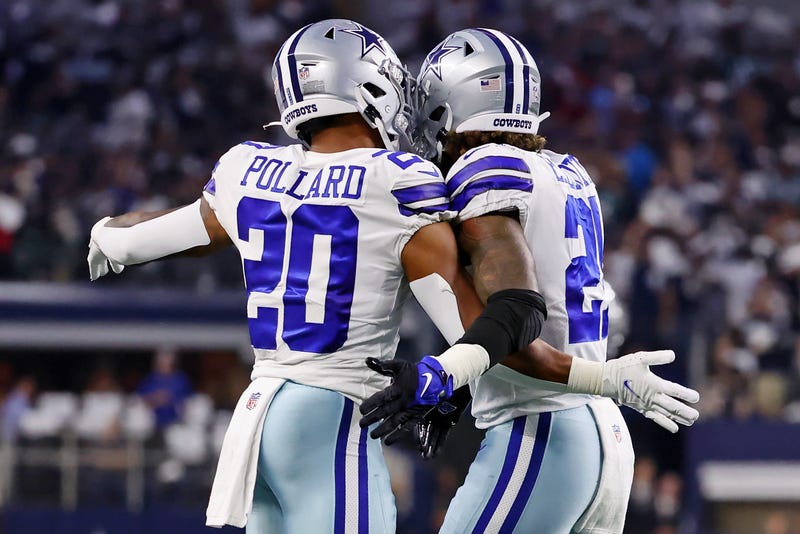 — Tony Pollard is the highest-graded overall running back, and he also has the highest running grade. Surprised? You shouldn't be: even as a backup, he is on pace for over 1,000 yards and is averaging nearly seven yards per attempt. Ezekiel Elliott, with a respectable 5.3 Y/A figure and four touchdowns, ranks as the No. 17 overall running back — mainly because of his horrendous pass-blocking score — but is also in the top five for running grades. Two top-five rushers behind the No. 1 ranked run-blocking line? That's scary.

— The top three receiving grades in the NFL belong not to wide receivers or tight ends, but to running backs Christian McCaffrey, Cordarrelle Patterson and Kenneth Gainwell, in that order.

— When looking at the wide receivers, the top of the list should hardly come as a surprise. Davante Adams and Tyreek Hill rank No. 1 and No. 2, respectively, with D.J. Moore, Justin Jefferson and Terry McLaurin filling out the rest of the top five overall. Cooper Kupp is in the top ten, with a top-five receiving grade.

— The big surprise of this receiver group is Deonte Harris, the Saints' third-year special teams weapon, checking in with the sixth highest grade. He's contributing in the receiving game this year as well, on pace for over 600 yards, and has looked incredibly fast on the field.

— Allen Robinson, Adam Thielen and Calvin Ridley have been top-of-the-line WRs throughout their careers and their PFF grades have reflected that... until this season. So far, they rank at No. 51, No. 64 and No. 66, respectively. Last year, they ranked at No. 5, No. 6 and No. 11 respectively. Weird.

— Speaking of a big drop-off, 49ers second-year wideout Brandon Aiyuk impressed in his rookie season and registered a top-20 PFF grade among wide receivers. Right now? No top 20. No top 40. No top 60. No top 80. Aiyuk is the No. 100 wide receiver out of 110 eligible players at the position. Yikes. 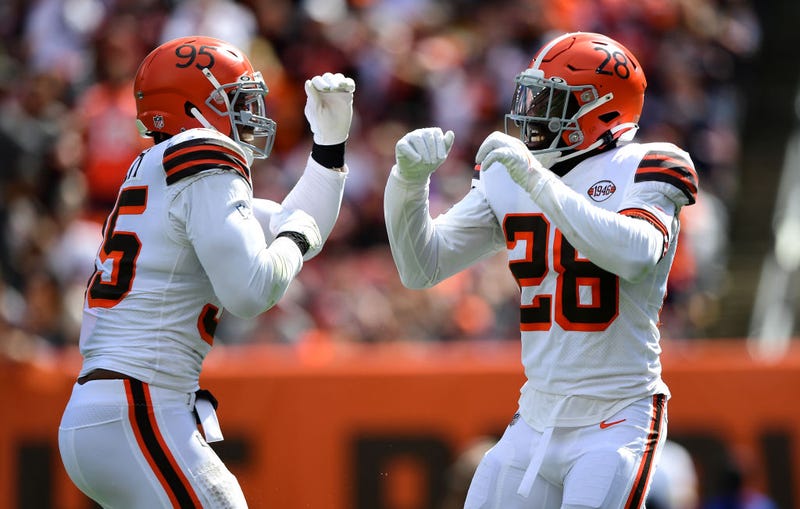 — Chandler Jones is as good a pass rusher as he ever has been, and his five-sack season debut against the Titans is a good testament of that. He's one of five edge rushers with a pass rushing grade of at least 90.0, which is to be expected. His defense against the rush has been another story, though, as he ranks quite literally dead last among eligible edge rushers with a 32.5 grade.

— PANIC! Aaron Donald is not the No. 1 interior defender, which he has been in every season since 2015! But that's okay, because he currently ranks at No. 2 with a stellar 91.3 grade, trailing only Cameron Heyward and his 91.9 grade. Crisis averted.

— Jeremiah Owusu-Koramoah was seen as a steal for the Browns when he dropped to the back of the second round of the 2021 NFL Draft, but no one saw him having such a major impact so quickly. He's the No. 2 linebacker in football based on PFF overall grades, behind only Buffalo's Matt Milano, and has by far the best run defense grade (87.7).

— Jaylon Johnson has shown quite the turnaround from his rookie season. In 2020, he graded out at 54.9, good for No. 84 out of 121 eligible cornerbacks. In 2021, he's taken the small step up to an 81.1 grade, making him the third highest-graded CB in the game behind Casey Hayward Jr. and Greedy Williams. Prior to Week 4, when the Lions actually had some success against him, he had been nothing but lockdown.

— Minkah Fitzpatrick is typically regarded as one of the best safeties in the NFL, if not the very best there is at the position. Through four weeks in 2021, however, Fitzpatrick's 29.9 overall grade is the second worst out of 82 eligible safeties, all of which stems from his league-low 28.7 coverage grade. Wow. 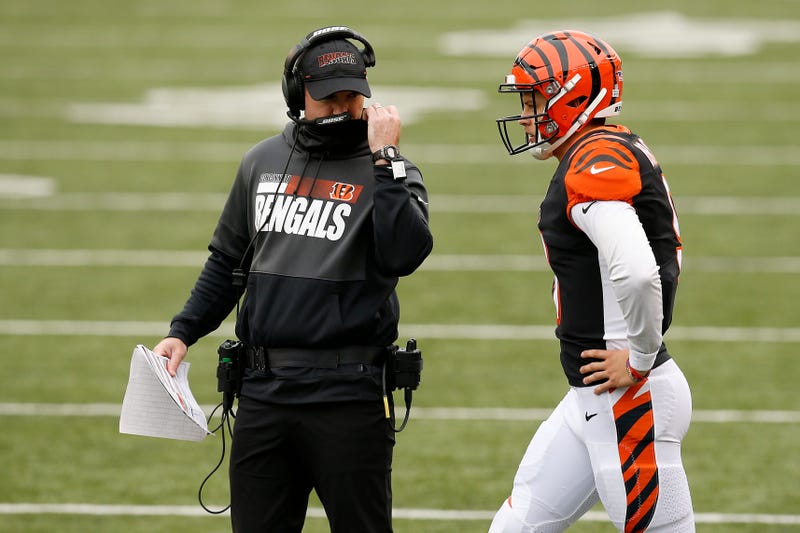 Zac Taylor and Joe Burrow have gotten the Bengals off to a good start through four weeks. Photo credit (Sam Greene/USA Today)

— Four of the top five teams in terms of overall grades — the Browns, Rams, Cowboys and Cardinals — are hardly surprising given what we've watched so far this season. But the No. 4 team, with a sparkling 84.1 grade, is a franchise that hasn't been outside the bottom ten since 2016: the Bengals. Zac Taylor's squad is off to a 3-1 start and are particularly excelling in their passing (84.5), rushing (81.0) and special teams (88.1) scores.

The Bengals are for real this season 🍿 pic.twitter.com/XC1COqybup

— Carson Wentz was ready to leave Philadelphia and take control behind one of the best offensive lines in the league. That's what the Colts have been in recent years, finishing with a pass blocking grade over 75.0 for three straight seasons. In 2021, they're dead last in that category, with a dreadful 40.4 score, one that certainly isn't helped by Quenton Nelson's placement on IR. They're also second-to-last in run blocking with a 49.3 grade. Surprisingly, Wentz has cut down on turnovers despite this setup.

In 2021, through four games, Wentz has ZERO turnover-worthy plays.

— The Raiders haven't been known for having a strong defense recently, ranking in the bottom five in overall PFF defense grades in each of the past three seasons. This year, they're graded as the No. 3 best defense after a quarter of the season, bolstered by their league-high 87.3 pass rush grade and No. 2 coverage grade of 79.0.

— Looking for a team to pick on in fantasy football? Start whichever running back is going up against the Chiefs, whose run defense grade of 29.2 is the lowest that any team has had over the past decade. Teams are averaging 5.4 yards per attempt against them, the highest mark in the league, and they're in the bottom three in both rushing yards allowed and rushing touchdowns surrendered. Granted, they've played against two of the most potent rushing attacks in football in the Browns and Ravens, but it's not a pretty statistic.