Watch our Audacy Live with BTS
By Tim Kelly, RADIO.COM

In addition to a robust trade market, there figure to be at least a few starting-caliber quarterbacks that become free agents this offseason.

Another intriguing name to watch this offseason will be Alex Smith, who after working his way back from one of the most gruesome injuries in sports history, faces an uncertain future with the Washington Football Team.

Smith led Washington to a 5-1 record in games that he started in 2020, but also threw eight interceptions, as opposed to six touchdown passes. What's more, he wasn't available in the team's Wild Card Round against the Tampa Bay Buccaneers because of a calf injury, and in his absence, Taylor Heinicke proved capable of at least being a backup option in 2021.

Smith is currently slated to have a $24.4 million cap hit in 2021, and certainly won't return to Washington at that price. The team has an out in his deal, where they could release him and be left with $10.8 million in dead cap, not an awful amount as compared to $24.4 million. The two sides could restructure Smith's deal, though the guess here is that Washington will make a serious play at a veteran quarterback this offseason, so they may prefer just to move on from Smith.

If Smith, who will turn 37 in May, is intent on continuing his career, he could very well garner interest as a backup on a contending team.

In the meantime, here's a look at eight quarterbacks we are sure can become free agents this offseason, with predictions on where they will ultimately land: 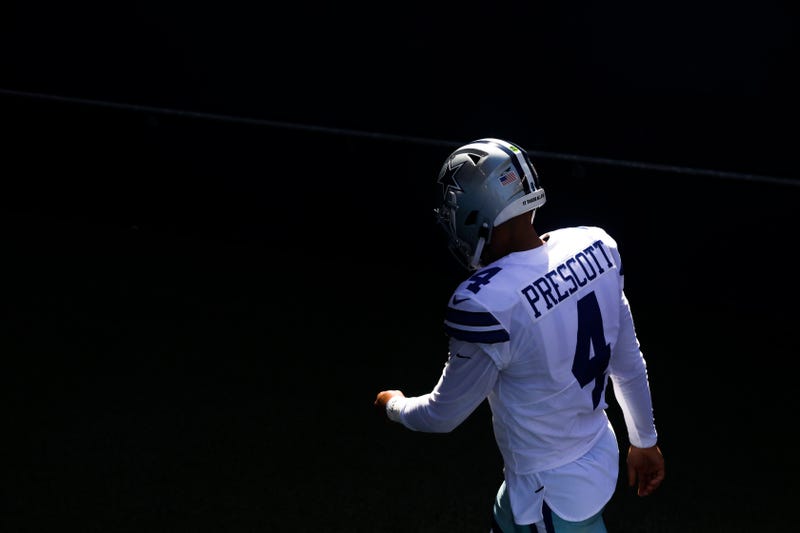 Prior to suffering a compound fracture and dislocation of his right ankle, Prescott was playing at an extremely high level for the Cowboys, having thrown for over 1,800 yards in parts of five games. There's no way that the Cowboys should allow the 27-year-old - definitively one of the 10 best quarterbacks in the sport - to walk away. Notice the language used above; we simply say that Prescott will "return" to the Cowboys. That could mean using the franchise tag on him for a second consecutive season, though with the salary cap expected to go down in 2021, the Cowboys would probably be better off reaching a long-term deal with Prescott. 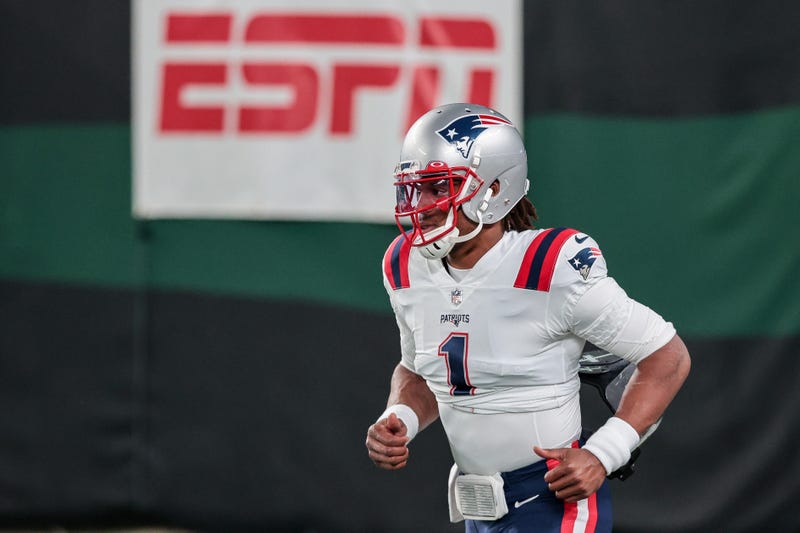 This one may be a little shocking to some, but Newton was a free agent until late-June last offseason, and threw just eight touchdowns to 10 interceptions in 15 starts in 2020. Newton did still rush for 592 and 12 touchdowns, so he remains very much a threat on the ground. But there are serious questions about how much Newton, 32 in May, has left as a passer. The Patriots reportedly plan to move on from Newton, and he's such an accomplished player (and a commanding presence) that it's hard to imagine him as a backup somewhere. He may be willing to accept being a backup role - he's said he's not ready to retire - but suitors may prefer having a second-string option that isn't a former NFL MVP. We're not saying Newton's career is necessarily over, but it wouldn't be shocking at all if he's not on a roster in Week 1 of the 2021 season. 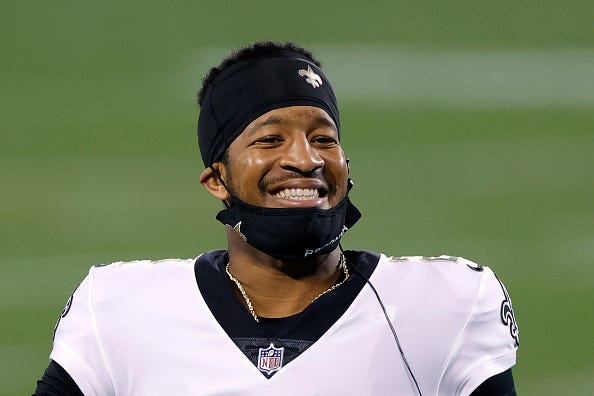 With Drew Brees expected to retire, Sean Payton has made no bones about it - the Saints would like to bring Winston back. The thing is, at the very least, he'll have to compete with Taysom Hill for the job, and it's hard to know who would be more likely to win that job. Would a team like the Carolina Panthers - whose offense is led by Joe Brady, a Payton discipline - potentially be able to offer Winston more money and a guaranteed chance to start? It's not impossible, and that would be a pretty good destination. Still, we think the best bet for Winston is to return to New Orleans, hope to beat Hill out and continue to benefit from Payton's tutelage. 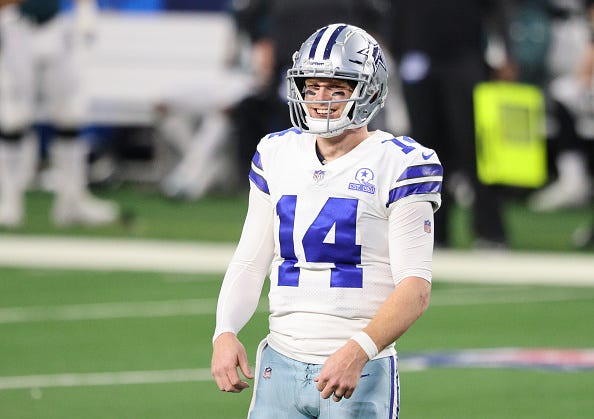 Given that Newton is likely to depart, the Patriots quarterback position is in flux. With the No. 15 pick in the NFL Draft, it's unclear if there will be a quarterback that they're intrigued by still on the board in the first round. In limited action, Jarrett Stidham was underwhelming in 2020, though he still has two years remaining on his rookie contract, meaning he could either be traded or return as a backup. Dalton isn't a sexy option, but he would bring stability to the position in New England. If they're able to acquire a veteran quarterback, Dalton could be the backup. If not, he could at least open the season as the starter, before giving way to Stidham or a rookie. 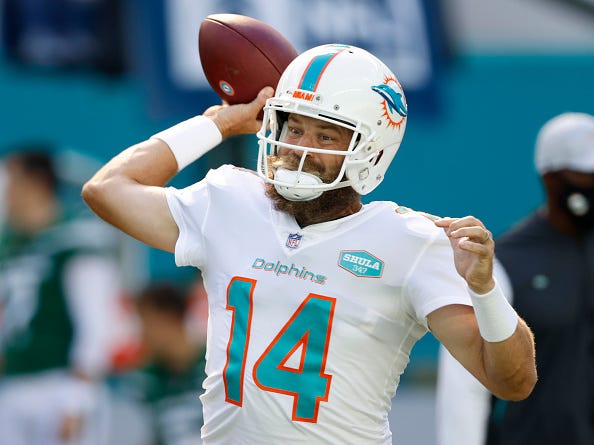 If the Dolphins are truly committed to Tua Tagovailoa, they won't want him looking over his shoulder in his second NFL season. Should they trade for Deshaun Watson, they probably won't invest heavily in the backup position. Either way, Fitzpatrick, who has said he wants to continue his career, will be looking for his ninth team. In Denver, he could backup and mentor Drew Lock. If Lock struggles taking care of the ball the way that he did in 2020, Vic Fangio could pivot to Fitzpatrick, who would probably be able to have quite a bit of success with Courtland Sutton, Jerry Jeudy, Tim Patrick and K.J. Hamler at his disposal. 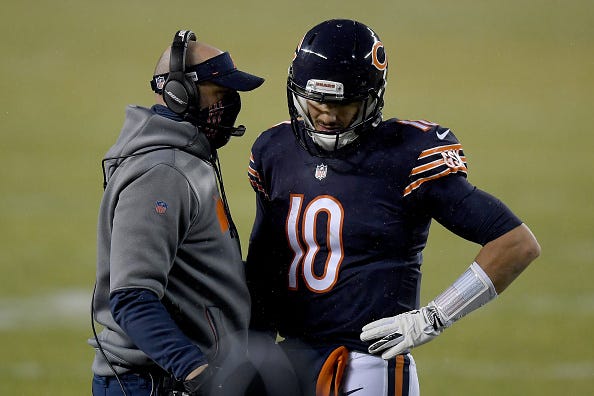 Trubisky's late-season performance - and a trip to the postseason - at least re-opened the discussion of him potentially returning to the Bears. Still, the guess here is that Ryan Pace and Matt Nagy won't want to tie a make-of-break year to Trubisky. If he's not returning to the Bears as a starter, Trubisky may very well have to build his value back up as a backup for at least a season. Given Nagy's connections to the Kansas City Chiefs, that would be an interesting landing spot, though there would be almost no chance to play in that situation. Going to San Francisco - if the 49ers retain Jimmy Garoppolo - would allow Trubisky to learn from a great offensive mind in Kyle Shanahan. And given that Garoppolo has played in just 25 of 48 regular season games over the past three years, there's a very real chance that Trubisky would get a chance to play if he signed with the 49ers. 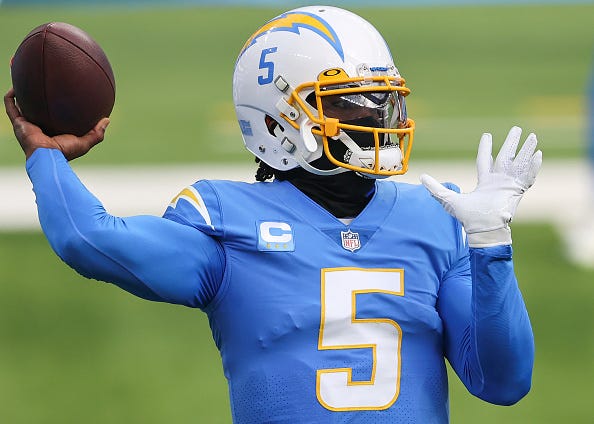 Taylor was probably going to get an extended chance to start for the Chargers in 2020, before his lung was accidentally punctured by a team doctor giving him a pain-killing injection ahead of the team's Week 2 matchup with the Kansas City Chiefs. Justin Herbert played so well that Taylor never got his job back. He's likely looking at all backup offers this offseason, but his first team, the Baltimore Ravens, could allow him to chase a Super Bowl ring. John Harbaugh has said in the past that he never wanted Taylor, who spent the first four years of his career in Baltimore, to leave. This offseason, Harbaugh could have a chance to bring Taylor back, while also making sure that the team is better equipped to handle Lamar Jackson going down with an injury than they were in 2021. 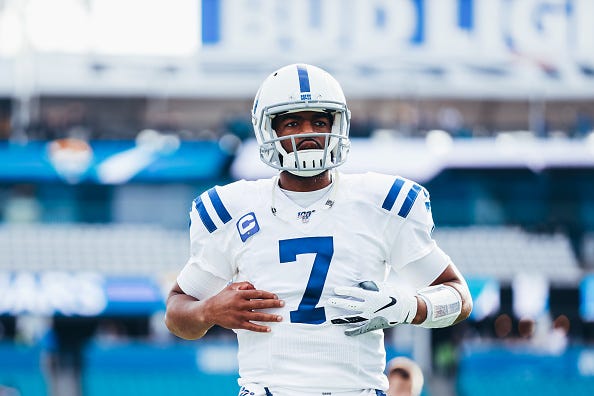 If the Colts use the No. 21 pick in the NFL Draft on a quarterback, perhaps they will be interested in bringing back Brissett to back up said selection. However, if they trade for a veteran quarterback, such as Carson Wentz, they may be inclined to just move forward with former fourth-round pick Jacob Eason as the backup. Brissett has proven to be a tremendous locker room presence, whether he's starting or serving as the backup. In Cincinnati, obviously Joe Burrow is going to start when healthy, but there's a chance that he won't be ready for Week 1 after tearing his ACL in late November. Brissett would be insurance for Burrow, and a tremendous mentor to last year's No. 1 overall pick.