In 2013, as the NFL began to seriously attempt to improve player safety, a rule was instituted that players had to wear one helmet throughout the course of the season. Though the rule probably had an interesting neurological explanation, it had an unintended consequence on the aesthetics of the NFL.

The Dallas Cowboys, for example, wore a white and blue navy jersey everything Thanksgiving Day from 2004-2012. Why were those uniforms put on the shelf? Because they included a white helmet with a solid navy blue star, rather than the team's traditional silver helmets that have a navy blue star with white trim. With the one-helmet rule, it became nearly impossible for teams to wear helmets that had a different primary color than their regular helmets, forcing the Cowboys to ditch those alternate uniforms.

Some teams have found creative ways around the helmet rule, like switching the logo on each helmet to match a throwback jersey, but keep the primary helmet color the same. Said arrangement have yielded mixed results. However, as far actually changing the helmet color for one game - and then having to change it back immediately after the game - there aren't enough Rudy Ruettiger's eager to furiously paint team helmets to make it work.

There's some evidence that the NFL may adjust the rule for the 2021 season, which would allow some of the greatest uniforms in NFL history to return. Let's take a look at the 15 greatest uniforms that the sport has ever seen, many of which are affected by the one-helmet rule: 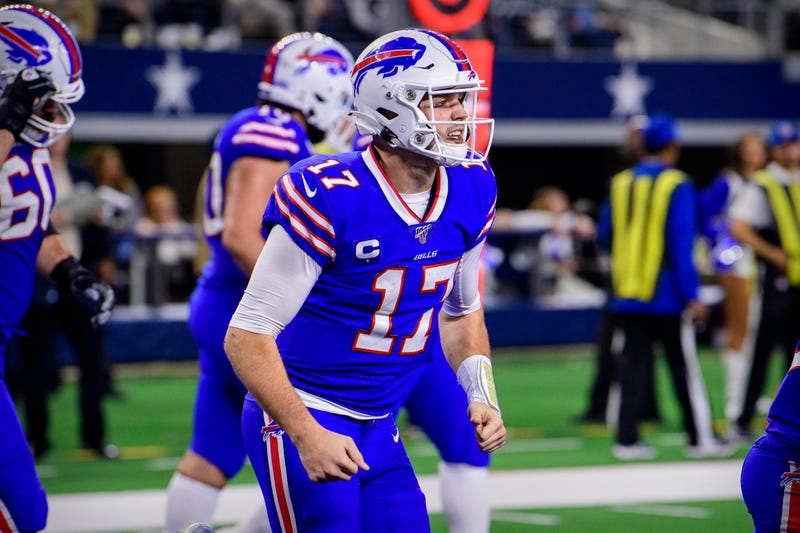 Josh Allen and the Bills have one of the best uniforms in the NFL today. Photo credit (Jerome Miron/USA Today)

Given the disastrous navy blue look that the Bills sported from 2002-2010, they were due to redeem themselves when they refreshed their uniforms for the 2011 season. They did just that, creating an elite helmet and finding a shade of blue that is loud, but not obnoxious. The blue-on-blue alternate uniforms were first introduced during the 2016 season. 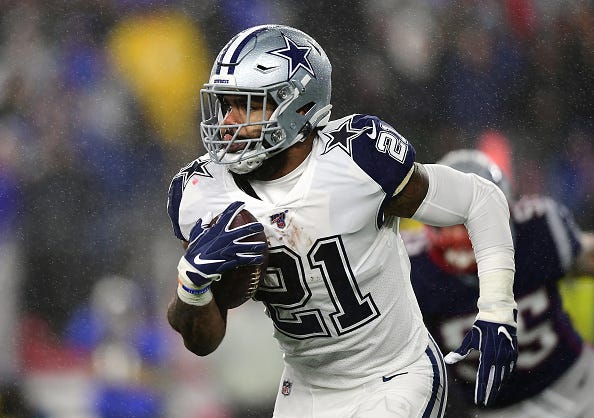 If a starter jacket was a jersey, this is what it would look like. These jerseys were initially introduced as an alternate in 1994, but ditched after the 1995 season. However, considering they don't require their own helmet, the Cowboys brought these back as an alternate in 2015 and it's aged pretty well, especially if you were a fan of the style of the 1990s. 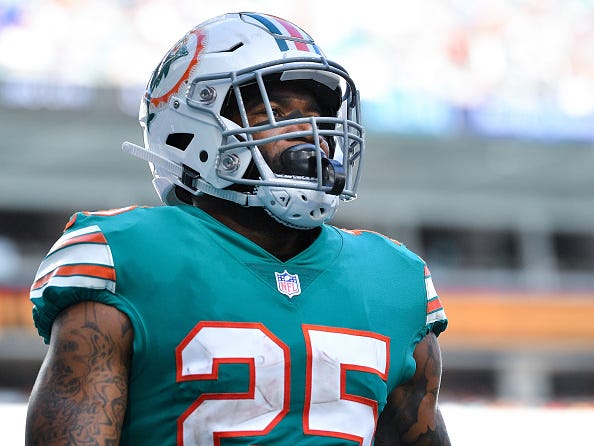 The updated logo that the Dolphins began wearing on their helmets in 2013 ruined what was one of the sport's coolest logos. That made it exciting when they began wearing these throwbacks in 2015, which came with the old Dolphin logo on the helmet. Because the Dolphins have a helmet that's primary color is white, they are able to just swap logos when they wear these jerseys without having to create an entirely new helmet. Though there's some subtle differences, these are based on the Dolphins' original green jerseys, a look that the team didn't begin to tinker with until the late 1980s. Sometimes things should be left as they are. 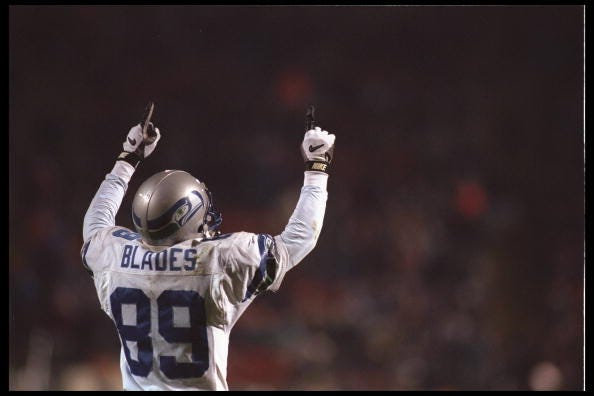 The Seahawks' current grey-on-grey alternates are one of the NFL's best jerseys, and just missed finding their way onto this list. We had to sneak these onto here at the expense of some other uniforms. The white jerseys - just like their blue counterparts - were a really cool look. However, what makes this uniform are the silver helmets and more plotting looking Seahawk logo. From their inception in 1976 to 2001, the Seahawks had a pretty iconic look. Ditto for the uniform set that they began wearing in 2012 (minus the neon Color Rush ones). We'll just forget the decade in between those two looks took place. 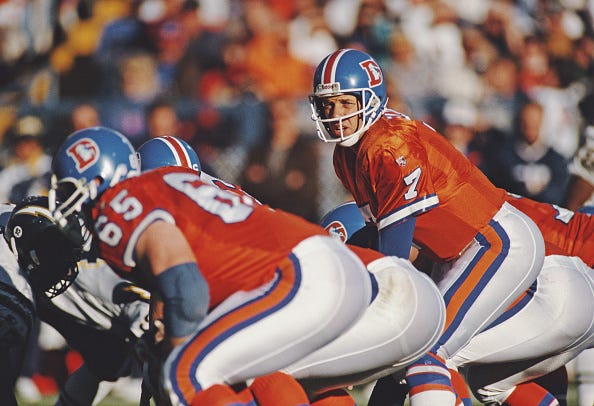 There's nothing particularly wrong with the Broncos' current look - hell, they've won three Super Bowls with it - but they'll always fall short of topping the orange crush jerseys that they wore in some form from 1968-1996. Again, there's nothing wrong with the current Broncos' helmet, but the lighter shade of blue with the Bronco standing up on its two hind legs inside the "D" is an unmatched look. The Broncos wore these exact jerseys as a throwback in 2001. If you're already bringing something back as a throwback five years after you ditched it as your primary look, perhaps you never should have ditched it in the first place. 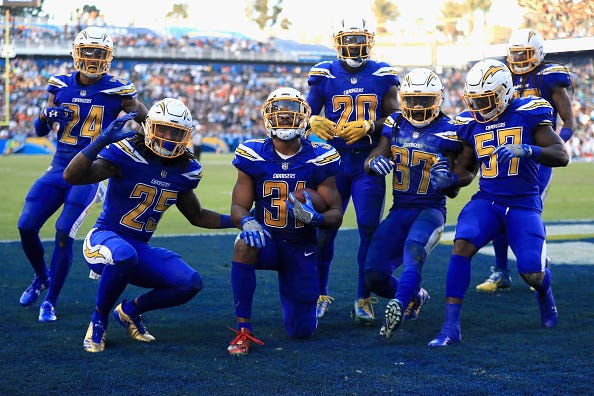 The NFL's Color Rush experiment may have produced a lot of really ugly - and sometimes anti-color blind - uniforms, but it was all worth it for these. The Chargers' all royal blue look, first worn in 2016, was a vast improvement over both their navy blue uniforms and their white uniforms. For just about any other franchise, it would have represented the greatest look in team history. The Chargers, as we'll see in a minute, are a rare exception. An updated version of these uniforms - one that probably didn't improve it in any way - was included in the team's new uniform set that was introduced before the 2020 season. 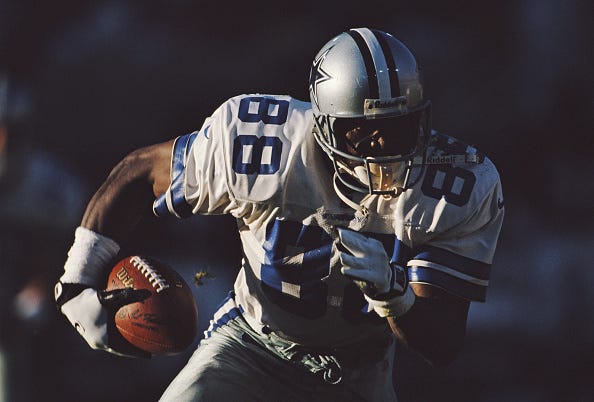 Michael Irvin is one of the greatest Cowboys of all time. Photo credit (Stephen Dunn/Allsport/Getty Images)

Whether it's at home or on the road, the Cowboys' white jerseys with silver pants and a silver helmet that features their iconic logo are one of the most consistently great looks in sports. The Cowboys - like the New York Yankees and Detroit Tigers - have done a good job not unnecessarily messing with their classic uniforms. 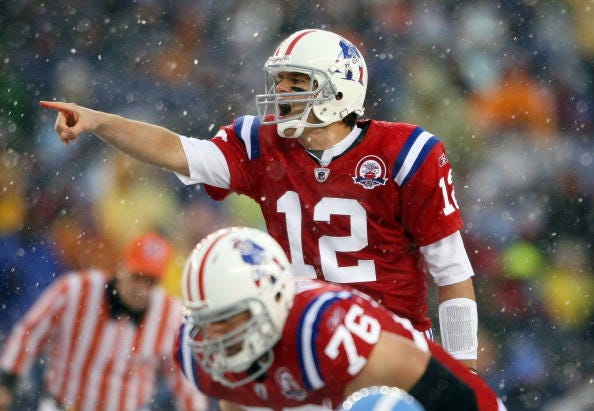 The Patriots have had so much success over the past two decades that we've never stopped to wonder whether the uniforms they wore during an unprecedented run of dominance were actually good. Certainly, the tweaks they've made ahead of the 2020 season aren't. The inescapable reality is that the red-and-white look they Patriots sported from 1961-1992 was much more fitting for a team called the Patriots. Additionally, Pat Patriot was a better primary logo than what some have deemed "The Flying Elvis." These red jerseys - along with the white ones, to a lesser extent - were worn as a throwback from 2002-2012, but fell victim to the NFL's one-helmet helmet rule. 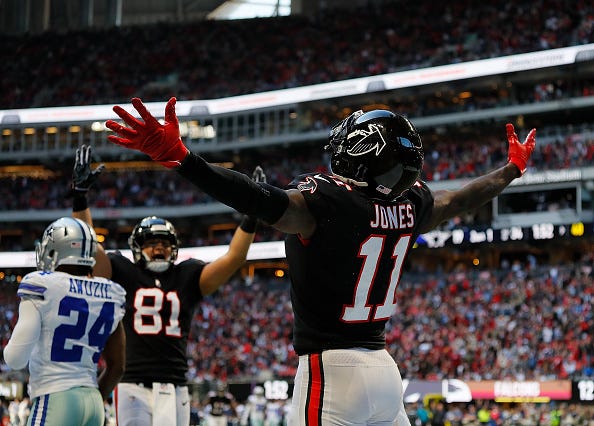 The new uniforms that the Falcons unveiled ahead of the 2020 season were pretty universally panned. Luckily, they kept their black jerseys and helmets - a primary look from 1990-2002 - as an alternate. The downfall of this uniform as a primary look may be that it didn't pop the same way in another color. However, the simplicity of the black jerseys and the older Falcon are a timeless look. 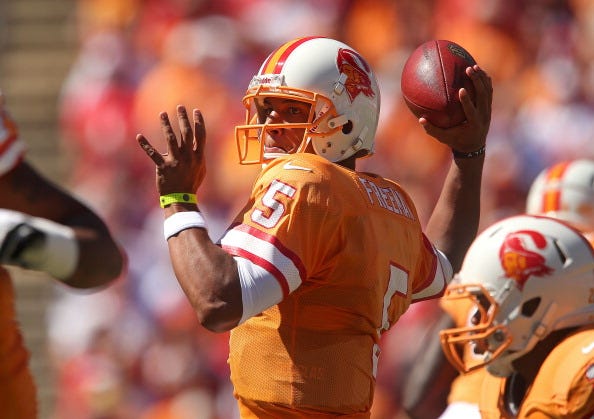 Smartly, the Buccaneers bailed on their crossing guard uniforms this offseason and returned to a look very similar to the one they rocked from 1997-2013. The next step? Reintroduce the creamsicle uniforms that the team wore from 1976-1996 as an alternate. These may be a bit much for a primary uniform - and the Buccaneers just changed their primary uniforms - but are a cool look once or twice a year, as Josh Freeman shows in a 2012 game above. Of course, the one-helmet rule, which Bruce Arians says he believes could be changed soon, would need to be eliminated for these to return in any form. Let's hope that happens, because Rob Gronkowski was born to wear this uniform. 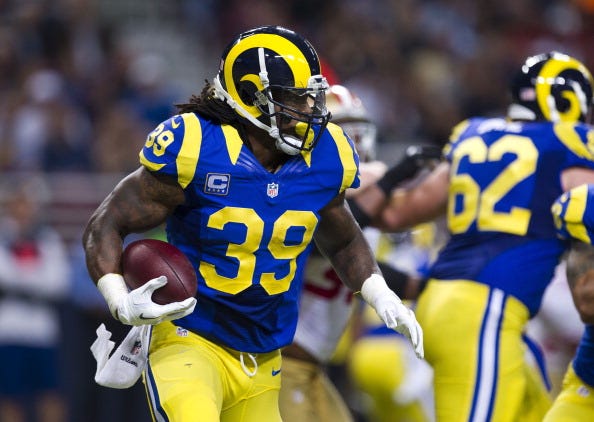 Steven Jackson spent the bulk of his career with the Rams. Photo credit (David Welker/Getty Images)

The Rams can't seem to just go with these exact jerseys and not change anything about them. Initially worn from 1973-1999, the team re-introduced them as an alternate from 2009-2017. After wearing them regularly in 2018 and 2019, the Rams again updated their jerseys prior to the 2020 season. Rather than just keeping these as is, the Rams elected to make the jersey numbers a gradient mix of yellow and white. The guess here is that within the next 10 years, the Rams will return to these jerseys on a full-time basis. 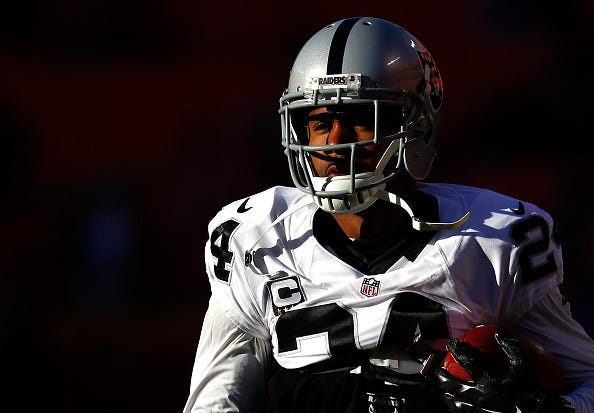 The Raiders' white Color Rush uniforms are a pretty incredible look, but still not quite as great as these. The white uniforms - worn primarily in road games - are a classic look to contrast with their black home uniforms. Whether they've been in Oakland, Los Angeles or Las Vegas, these have made for one of the cleanest looks in the sport. 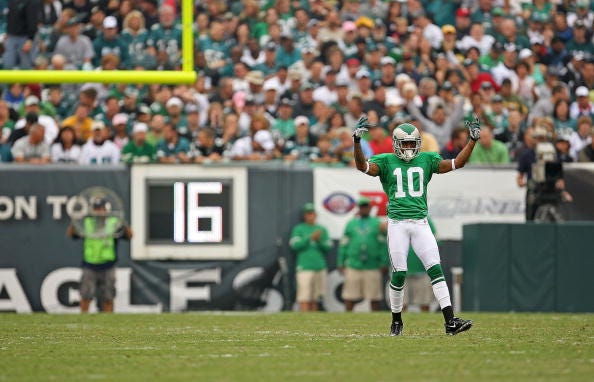 After winning a Super Bowl in midnight green, the Eagles may never return to kelly green as their primary look, but there's definitely an appetite for the primary color that the team wore from 1935-1973 and again from 1985-1995 to return in some form. The Eagles wore their 1960-inspired kelly green throwbacks in Week 1 of the 2010 season. The simplicity of the jerseys - and the silver wings on the helmet - would make for a great change of pace if worn two times a season. The return of kelly green - unless it's made the primary uniform color again - is contingent on the NFL eliminating it's one-helmet rule. 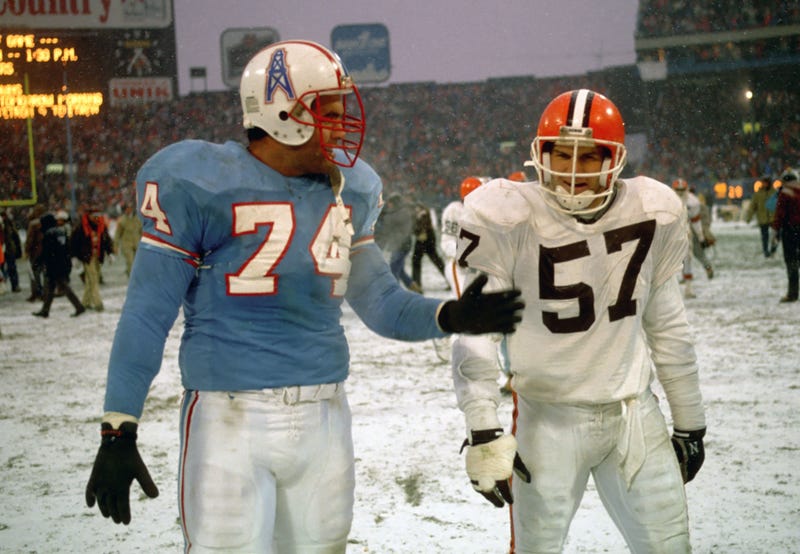 Like the Montreal Expos, the real tragedy of the Houston Oilers ceasing to exist is that one of the greatest logos in the history of sports was lost. Though the franchise initially kept the name and logo when it relocated to Tennessee in 1997, the organization changed it's name to the Titans in 1999. Not only is Titans a weaker name, but with the name change, the franchise bailed on a great logo and powder blue uniforms and has yet to find a good look. 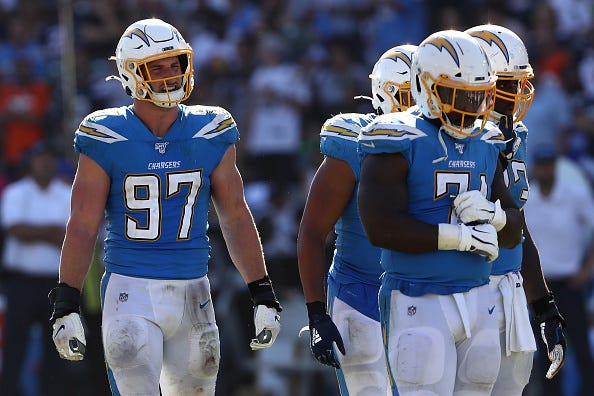 The Chargers' uniform refresh ahead of the 2020 season received a pretty positive reception. Still, when you consider that the Chargers' uniform kit included this take on the powder blue concept from 2002-2019 - they ditched the numbers on the helmets in 2007 - you wonder if it was unnecessary. There's a generation of kids that didn't truly feel like they had arrived in high school until they showed up wearing a powder blue LaDainian Tomlinson jersey.