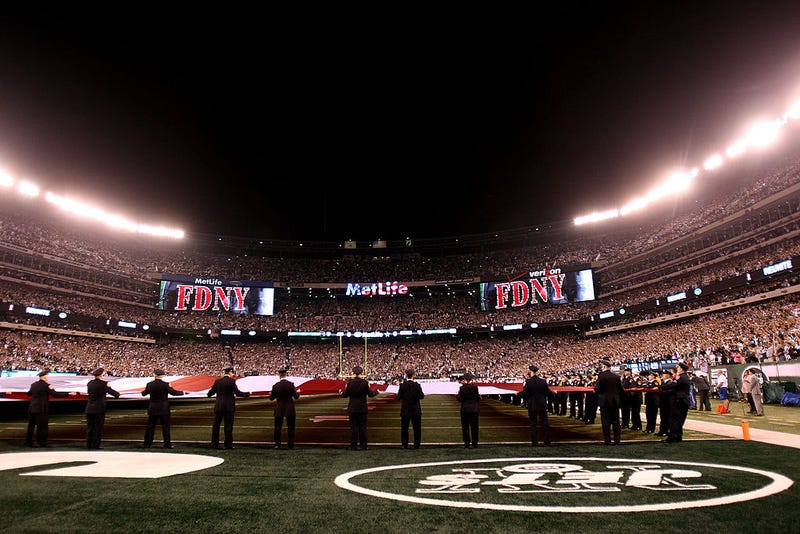 An American Flag is stretched across the field and held by 9/11 first responders and players from both the New York Jets and the Dallas Cowboys at MetLife Stadium on September 11, 2011 in East Rutherford, New Jersey. Photo credit Elsa/Getty Images
By Kyle Kandetzki

NEW YORK (WCBS 880) -- The National Football League is opening its season with a full slate of plans to remember 9/11 and honor those affected 20 years ago.

Football is officially back Thursday, with the Super Bowl champion Tampa Bay Buccaneers facing the Dallas Cowboys, and as part of the moments before the game, the NFL will honor families affected by the attacks 20 years ago.

The league said it turned to the group Tuesday’s Children to look for families to honor during its opening week. The group works to ensure families who dealt with acts of mass violence have support.

Among those being honored will be the Cayne family. They currently live in Florida, and lost their father on 9/11.

Then on Sunday, a tribute narrated by actor and former FDNY firefighter Steve Buscemi will air before all 1 p.m. games. It’ll highlight America’s resiliency in the days after the attacks on America.

Music therapist Juliette Candela will then perform the National Anthem from the Sept. 11 Memorial and Museum in Manhattan.

Candela was also selected by Tuesday’s Children, as her dad lost his life in the World Trade Center on 9/11.

Players from around the league will also wear 9/11 ribbon helmet decals and coaches, media members and other NFL employees will wear 9/11 lapel pins.

Some teams are also due to participate in the 9/11 Day of Service, alongside other league members.