J.J. Watt is one of only three players, the others being Lawrence Taylor and Aaron Donald, to win NFL Defensive Player of the Year three or more times. Watt won’t be winning the award this year (injuries limited him to just seven games during the regular season), though his brother, T.J., might. In fact, it would be a shock if the youngest Watt sibling (middle child Derek is T.J.’s teammate) didn’t take home the hardware after tying Michael Strahan’s single-season sack record.

“[T.J.] deserved it last year. He’s gonna’ get it this year. I mean if he doesn’t, I don’t know what’s going on,” Watt told NFL Network’s Rich Eisen Thursday. “[He] tied the all-time sack record in the NFL. Only 14-and-a-half games I think he played, 22-and-a-half sacks. The guy is unbelievable to watch.”

#RedSea  @JJWatt has won #NFL  Defensive Player of the Year three times — does he think his brother @_TJWatt deserves his first?#NFLPlayoffs#HereWeGo pic.twitter.com/KFxsMAaFhe

Despite arguably better production, T.J. finished a close second to Donald in last year’s DPOY voting, an injustice that should be righted this time around. “He’s incredible,” said J.J., who resumed practicing Thursday and could be available for the Cardinals’ playoff opener Monday night in Los Angeles. “What T.J. did this year and what he means to that team and what he’s able to do, I know defensive players and anyone but quarterbacks don’t have a chance to win the MVP, but he deserves to be in that conversation as well.”

Watt was hoping to be credited with an additional sack (which would have given him sole possession of the record), though his appeal was denied with the NFL ultimately determining his takedown of Ravens quarterback Ty Huntley was the result of a bad snap, which is scored in the official record book as an “aborted play.” “I don’t know how that’s not a sack when you look at the letter of the law,” said J.J., clearly skeptical of the league’s ruling. “That deserved to be a sack, especially when you compare it to Strahan’s final sack. I mean, come on.”

Watt, of course, is referring to Strahan’s record-setting sack in 2002, when Brett Favre handed him a freebie by immediately sinking to the turf. T.J. and the Steelers will travel to Kansas City for a date with the Chiefs Sunday night in what could be Ben Roethlisberger’s final NFL game. The Chiefs are overwhelming favorites, holding a decisive 12.5-point edge on FanDuel Sportsbook. 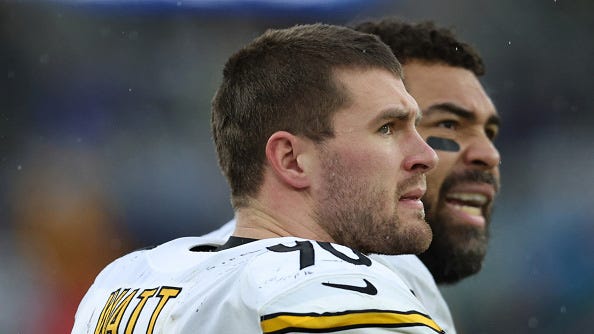