Deshaun Watson may not be the only star who wants to leave Houston.

On Saturday, it was reported that Texans pass rusher J.J. Watt may have played his last game for Houston, speculating a potential trade or release for the 32-year-old Pro Bowler.

Watt has spent his whole career with the Texans, but with time not on his side, the future Hall of Famer likely wants to get a chance at a Super Bowl ring before retirement.

Here are some possible landing sports for Watt:

Tom Brady is competing in his 10th Super Bowl at the age of 43, so, if you can’t beat him, join him, right? A Bucs-Watt union could make sense. Bucs defensive tackle Ndamukong Suh is playing this season on a one-year deal and just turned 34. Watt is two years younger and could offer a better alternative for Tampa. The Bucs are definitely an intriguing team to watch in this sense. 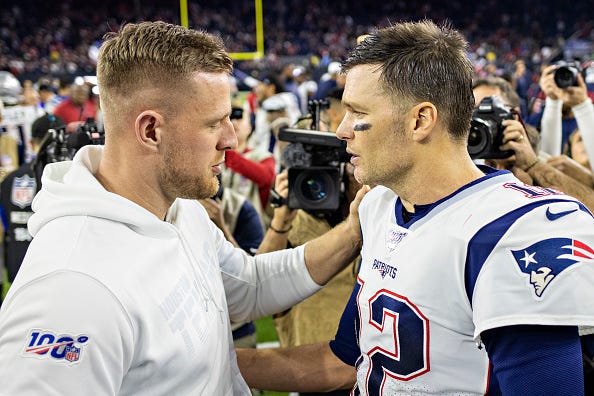 Forget uniting with Tom Brady, how about his former coach?

The Patriots will need to address the defensive line and pass rush this offseason after averaging just 1.5 sacks per game in 2020. Watt is an intriguing option for the Patriots to consider and it is worth mentioning Houston’s new GM, Nick Caserio, is a former Patriots executive, which could potentially give New England an inside track on a potential trade.

Belichick has raved about Watt in the past, paying him the highest of all compliments by likening the Texans pass rusher to Lawrence Taylor, whom Belichick coached as a defensive coordinator with the Giants. A Watt-Belichick marriage would certainly be enticing for both parties as Belichick surely wants to do everything he can to return to the playoffs after missing out in 2020.

The Cowboys may not seem as if they are close to winning a Super Bowl, but you never know who will emerge on top in the NFC East these days. Dallas certainly needs all the help it can get on defense and while Watt would not only bring talent opposite DeMarcus Lawrence, but also leadership in the locker room.

Fitting Watt into their scheme may be a challenge, but if they can figure out a way to do that and if Dak Prescott is back and healthy, along with the offensive line, it is not unreasonable to think the Cowboys can steer the course back to being serious contenders. 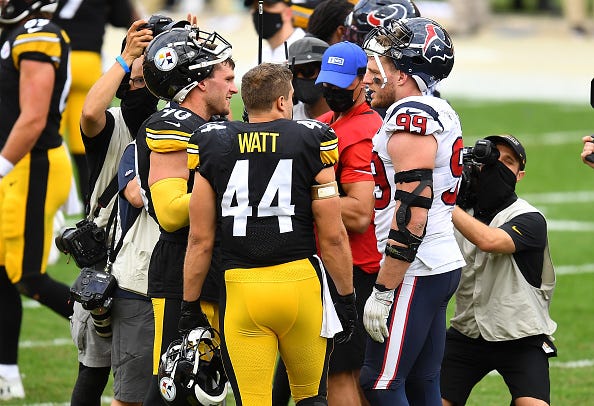 Imagine a Steelers defense with two Watts to worry about? T.J. Watt is one of the best linebackers in the league, and while J.J. is not quite in his prime anymore, he is still pretty darn good. There is no guarantee the Steelers will be able to bring back Bud Dupree, so maybe they unite the Watt brothers (which also includes fullback Derek) to fill that void? Adding J.J. to a defensive line of Cam Heyward and Stephon Tuitt would continue to make the Steelers one of the scarier defenses in the league.

How fitting would it be for Watt to go back to his home state of Wisconsin, win a Super Bowl with the Packers, and ride off into the sunset? While it would be the cliché ending to a career, it certainly could happen. The Packers need help on defense, with Za’Darius Smith serving as the lone pass rushing threat.

The Packers parted ways with defensive coordinator Mike Pettine, so clearly changes are coming on the defensive end. The team also faces some salary cap questions, such as what to do with running back Aaron Jones.

But Watt seems like an ideal fit in Green Bay, and if Aaron Rodgers is indeed returning, he could be a missing piece of the puzzle to get them over the NFC Championship Game hump that has stood in their way the last two seasons.