All the buzz at San Francisco 49ers training camp has been about rookie quarterback Trey Lance and how he has looked.

But Jimmy Garoppolo, who enters camp as QB1 on the depth chart, has been pretty good too, at least GM John Lynch thinks so.

Lynch spoke highly of both Lance and Garoppolo on “The Adam Schefter Podcast” on Tuesday, saying that Lance’s arrival has appeared to light a fire under Garoppolo.

“[Lance] being here has brought the best out of Jimmy Garoppolo,” Lynch said. “Jimmy is a big-time competitor and we haven’t played a game yet, but in practice in the offseason and practice in training camp thus far, he’s playing the best football since he’s been here.”

It’s quite the high compliment for Garoppolo, who started his 49ers tenure by going 5-0 and leading the 49ers to a Super Bowl appearance in 2019.

But even in that 2019 season, Garoppolo struggled with consistency and 2020 was marred by poor play and injuries.

Of course, Lynch spoke glowingly of Lance as well.

“He’s looked tremendous,” Lynch said. “I think what’s been most impressive is the way he approaches his job. He’s a pro in its truest sense. … . I think we got a lot of guys who love football. We work hard to bring in the right type of guys, lot of guys who love the game and do the things necessary to prepare and Trey is an embodiment of that.”

So what will Lynch and the Niners do if both Lance and Garoppolo continue to play at a high level and impress?

“That’s another great problem to have,” Lynch said. “And we’ll deal with that when it comes.” 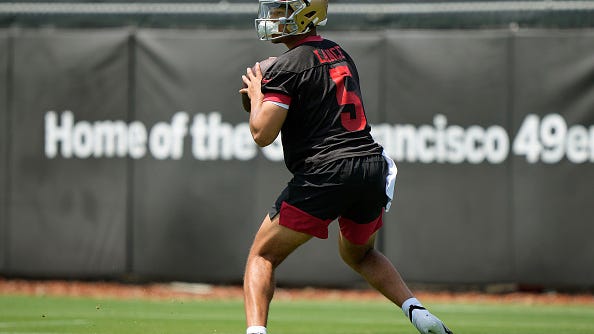