After an exciting game against the Las Vegas Raiders on Monday Night Football that resulted in a crushing overtime defeat, the Baltimore Ravens are already making some changes to their roster.

The Ravens signed former Falcons and Giants RB Devonta Freeman from the practice squad to the active roster on Thursday, agent Drew Rosenhaus told ESPN's Adam Schefter. The move essentially leaves Le’Veon Bell as the odd man out and the only running back left on the practice squad as they prepare to face the Pro Bowler's former team, the Kansas City Chiefs this week.

On Wednesday, head coach John Harbaugh said he thinks Bell will eventually get a chance in the Ravens backfield, which also features Latavius Murray and Ty’Son Williams in addition to the newly appointed Freeman. Instead, the veteran running back will have to wait, although he received praise from the Ravens head coach.

“We have four good guys in here, and those guys are all going to be a big part into what we’re doing going forward,” Harbaugh said. “I’m excited about having those four guys. I think we were very, very blessed, the fact that those guys were available when our guys got hurt. So it’s big”.

Bell signed to Baltimore’s practice squad on Sept. 7 after a few bad seasons with the Jets and the Chiefs while the Ravens were desperate for help due to injuries.

It’s still a surprise to many that the former Pro Bowler and Steelers star is still on the practice squad, but if Harbaugh is not lying, we can expect to Bell taking some carries soon. 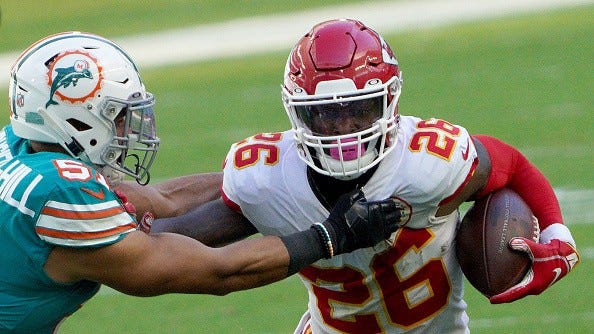