Marshawn Lynch, who the Bills selected with the 12th pick in the 2007 NFL Draft, knew he wasn’t long for Buffalo. “He just didn’t like where he was,” acknowledged former GM Buddy Nix. “Can you imagine where he came from to Buffalo? That’s a culture shock.”

An Oakland native who had spent his entire life in the Bay Area, Lynch preferred to play on the West Coast and eventually got his wish when the Seahawks acquired him for a pair of draft picks weeks prior to the 2010 trade deadline. Though Lynch would go on to become a beloved figure in Seattle, bringing the Seahawks their first and so far only Super Bowl title in 2013, the Pro Bowl running back was conflicted at the time, feeling he had let Buffalo down.

“He’s sitting there in front of my desk, and he’s got tears in his eyes. He’s crying. I said, ‘Marshawn, what is wrong? This is what you wanted,’” Nix told Tim Graham and Mike Sando of The Athletic, recalling Lynch’s reaction to being traded. “He says, ‘I wanted to finish what I started. I’m disappointed I can’t finish what I came here to do and that’s help Buffalo be a winner.’ That’s the kind of kid he was. He had a lot of pride.”

It would all work out in the end—well maybe not for the Bills, who traded a potential Hall-of-Famer for pennies on the dollar—with Lynch making an immediate impact on his new team.

“What you look for in a back is someone who can get more than what is blocked for. That is the thing Marshawn could do,” said Sherman Smith, Lynch’s position coach for most of his Seattle tenure. “He did that all the years he was in Seattle with us. He made a lot of things right that were wrong.”

Smith described Lynch as “one of the best leaders on the team,” while also noting his unusual tendency to come off the field, not because he was tired, but because he wanted his teammates to receive more playing time. “Marshawn would take himself out of the game—it was not that he was tired, he wanted other guys to play. He would do that! He would take himself out of the game because he wanted other guys to get a chance,” remembers Smith. “I said, ‘Marshawn, you can’t do that, man.’”

Marshawn Lynch's journey to the Seahawks may be the greatest trade deadline deal in NFL history.

Seahawks coach Pete Carroll had long coveted Lynch, trying (unsuccessfully) to woo him to USC when he was a high-school star at Oakland Tech. Seattle proved to be a natural fit for Lynch, reuniting “Beast Mode” with his former Cal-Berkeley teammate Justin Forsett. And it almost didn’t happen. In fact, if Lynch had had his way, he would have been a Packer.

“I remember it came down to Seattle and Green Bay as the two teams that really were most heavily involved,” said Lynch’s longtime agent Doug Hendrickson. “Obviously with Aaron [Rodgers] being in Green Bay and Marshawn playing with Aaron [at Cal], that is really where Marshawn wanted to go.”

Who knows how dominant the Packers would have been with Lynch in their backfield, but Seattle was good to Lynch, launching him to NFL superstardom as one of the game’s most colorful personalities. Speaking of Lynch, the 35-year-old made a memorable appearance on ESPN’s “Manning Cast” earlier this week, taking in Monday night’s Seahawks/Saints game alongside Peyton and Eli Manning. Lynch, of course, has history with the Saints, unleashing one of the greatest runs in NFL history against them in 2011. 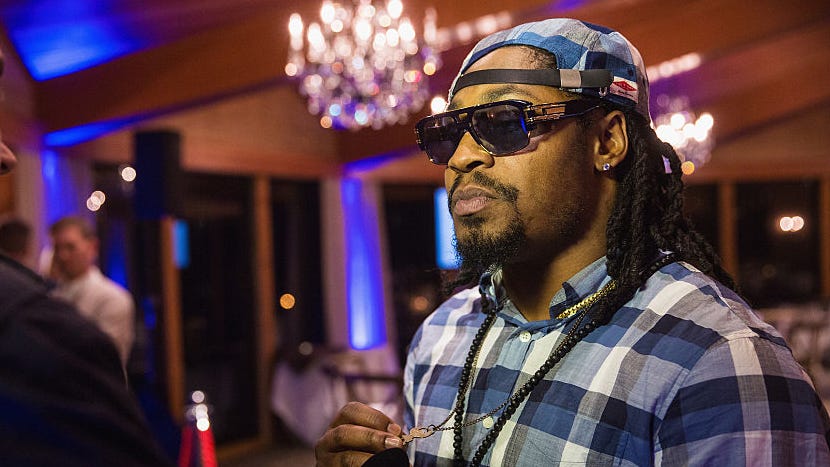