In what was undoubtedly the most important game of Matthew Stafford’s career, he made his most clutch throw.

The Los Angeles Rams quarterback had 42 seconds to get into field goal range after the Bucs had just erased a 27-3 deficit and appeared poised at pulling off an epic comeback.

After finding Cooper Kupp for a 20-yard gain to move up to their own 44-yard line with 28 second remaining, Stafford made the most clutch throw of his career when he connected with the NFL’s leading receiver yet again for a 44-yard gain, taking the ball all the way down to the Bucs’ 12-yard line.

The play set up a 30-yard field goal attempt for Matt Gay, who kicked it through the uprights as time expired to send the Rams to the NFC Championship Game.

Stafford finished the game completing 28 of 38 pass attempts for 366 yards and two touchdowns. He is now one win away from going to the Super Bowl after never winning a playoff game in his career before being traded to the Rams from the Lions prior to this season.

After his late-game heroics and saving the Rams from a historic collapse, many media pundits and fans recognized Stafford is rewriting his legacy as we speak.

#Rams QB Matthew Stafford has his playoff moment. And LA goes home… which is good! Back in the NFC Title game.

From the "no playoff wins" narrative to one game away from the Super Bowl.

Now, Stafford and the Rams will host NFC West rival San Francisco 49ers at SoFi Stadium next weekend with a trip to the Super Bowl on the line. 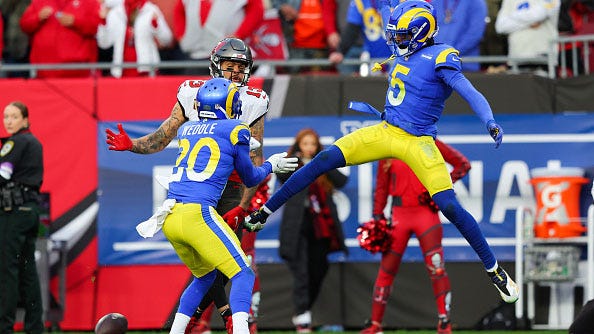