NBC's Mike Tirico reacted Sunday evening to a racist e-mail sent in 2011 from his former broadcast partner, Jon Gruden, who is now in his second stint as the head coach of the Raiders franchise.

After Tony Dungy said that he accepted Gruden's apology, Tirico -- who shared the Monday Night Football booth with Gruden from 2009-2015 -- offered his thoughts.

"I think in being honest with the audience, I should weigh in a little bit here because I was with Jon at that time, seven years as my partner on Monday Night Football. I probably know Jon better than anyone in the league on a personal level," Tirico said on Football Night in America. "He said already that he was ashamed by the comments in the e-mail. The comments in the e-mail are wrong. But, my experience kind of parallels Tim Brown, who played for Jon and is a Hall of Fame receiver. He said he never experienced or saw anything that would say Jon was racist in any way. That is exactly the experience I had in seven years of traveling, three days together on the road every week. So, the story will continue to play out ... the league may weigh in ... the team may weigh in ... but just [my] perspective on a story that got a lot of headlines this week."

Friday, Andrew Beaton of The Wall Street Journal obtained an e-mail that Gruden sent to Bruce Allen -- then a high-ranking executive for the Washington Football Team -- in July of 2011. In it, Gruden referred to NFLPA executive director DeMaurice Smith as "Dumboriss," and used a racial trope when talking about him.

Gruden has apologized -- and did so again after Sunday's loss to the Chicago Bears, though he declined to discuss the matter extensively -- but denied that his original comments in reference to Smith were meant as a racial trope:

Jon Gruden discussed the article with his players this morning. Here are his comments to me on the offensive email: pic.twitter.com/7gkNd5Rzzs

Smith -- who has led the NFLPA since March of 2009 -- responded to Gruden's unearthed e-mail in Beaton's story.

“This is not the first racist comment that I’ve heard and it probably will not be the last.” Smith said. “This is a thick skin job for someone with dark skin, just like it always has been for many people who look like me and work in corporate America. You know people are sometimes saying things behind your back that are racist just like you see people talk and write about you using thinly-coded and racist language.

“Racism like this comes from the fact that I’m at the same table as they are and they don’t think someone who looks like me belongs. I’m sorry my family has to see something like this but I would rather they know. I will not let it define me.”

Both the Raiders and the NFL issued statements Friday condemning Gruden's e-mail, though there's no indication at this point that either plan to take action against the former Super Bowl Champion head coach. 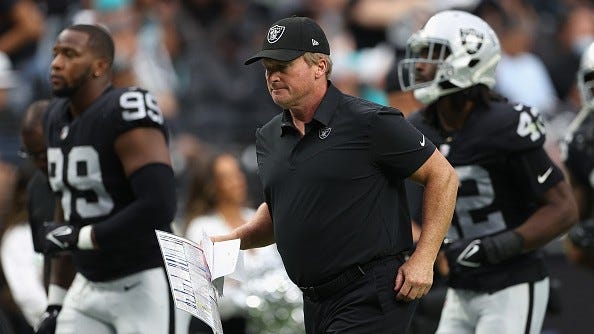