Set aside speculation about the future of Tom Brady, what Mike McCarthy's hiring in Dallas means and questions about how the Cleveland Browns will proceed organizationally. There will be a time and place to reflect on those topics.

Just not this weekend.

We're down to the final eight teams of the 2019-20 NFL season, as the Divisional Playoffs will take place this weekend. Here's an in-depth preview - along with predictions, of course - on how the four postseason games schedule for this weekend will play out: 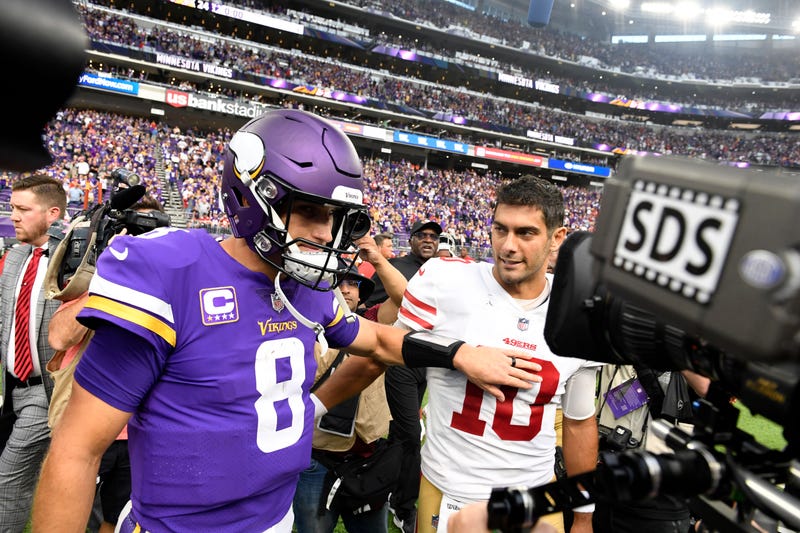 1. This will be Kyle Shanahan's first playoff game as a head coach. The last time he coached in the postseason was in Super Bowl LI, when he was the offensive coordinator of the Atlanta Falcons. He had a great first-half game-plan...
2. In games where Dalvin Cook has rushed for 90 or more yards in 2019, the Vikings are 7-1.
3. The 49ers are expected to get star linebacker Kwon Alexander back from a torn pectoral that he suffered in late October. Certainly, they could use him, as a defensive unit that looked historically dominant in the first-half of the season gave up 30 points per game in December.
4. Stefon Diggs hasn't topped 100 receiving yards since Week 11.
5. This will be Jimmy Garoppolo's first career postseason start, but he's a two-time Super Bowl Champion, having served as Tom Brady's backup with the New England Patriots during their victories in Super Bowl XLIX and Super Bowl LI.

For as impressive as Dalvin Cook has been this season, the 49ers' three-headed rushing attack of Raheem Mostert, Matt Breida and Tevin Coleman thrived in Kyle Shanahan's zone-blocking scheme, as the 49ers finished with the NFC's top-rated rushing attack in the regular season. They'll again lean on that attack - along with getting a defensive bounce-back - in a 24-16 win over the Vikings. 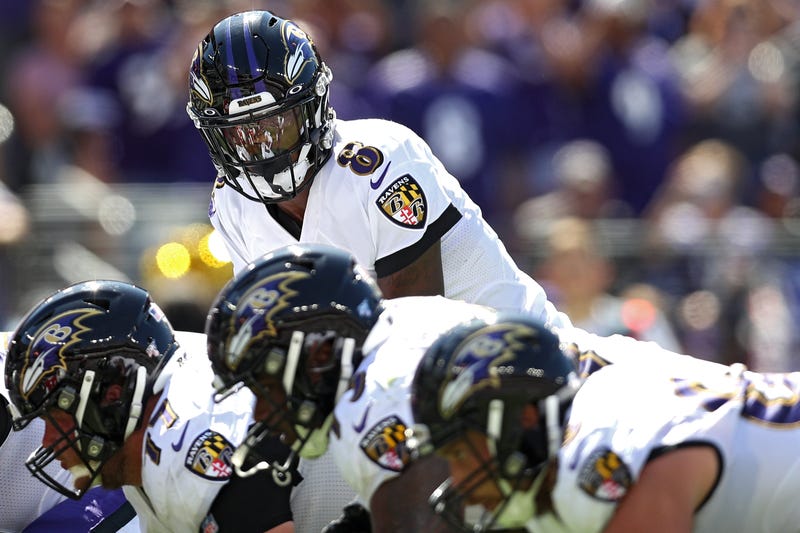 1. Lamar Jackson struggled for much of his first playoff game last year, though he came alive in the fourth quarter of an eventual Wild Card Weekend loss to the Los Angeles Chargers. In his first - and, to this point, only - postseason game, Jackson completed 14 of 29 passes for 194 yards, two touchdowns and one interception. He was limited to just 54 rushing yards in a 23-17 loss. Of course, he's grown exponentially in his second NFL season.
2. The formula for the Titans is pretty simple - pound the ball with Derrick Henry. When you count their postseason upset of the New England Patriots, the Titans are 7-0 when Henry rushes for 100 or more yards. They're 3-7 when Henry, the NFL's leading rusher in 2019, is held under 100 rushing yards.
3. John Harbaugh has a 10-6 career postseason coaching record. He's tied with Mike McCarthy for four among active head coaches in playoff wins, trailing Bill Belichick, Andy Reid and Pete Carroll.
4. Since Ryan Tannehill took over as the Titans' starting quarterback, the team is 8-3.
5. The Ravens finished the season with the No. 1 ranked rushing attack in the NFL. That was due, in large part, to Jackson's ability to run. However, Mark Ingram II also averaged five yards a carry in 2019. The 30-year-old, who is dealing with a calf injury, is yet to practice this week. Gus Edwards, the team's No. 2 running back, did average 5.3 yards-per-carry in 2019, including rushing for 130 yards in a Week 17 win over the Pittsburgh Steelers.

Whether Ingram II ultimately plays or not - the guess here is he will - there's just an it factor with the 2019-20 Ravens. They went undefeated in the preseason. What essentially amounts to their JV team defeated the Pittsburgh Steelers, who were still fighting for a postseason spot, handily in Week 17. Lamar Jackson will lead the Ravens in his first playoff win, throwing for over 200 yards and topping the 100 rushing yards mark. The Ravens will defeat the Titans, 30-17. 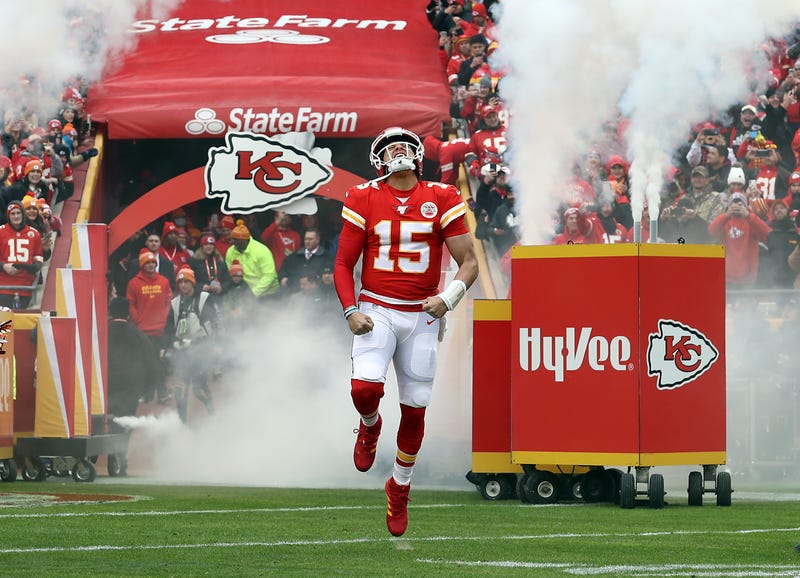 1. In two career postseason games, Patrick Mahomes has thrown for 573 passing yards, three touchdowns and zero interceptions. The Chiefs went 1-1 in their two postseason games a season ago; defeating the Indianapolis Colts in the AFC Divisional Round before falling to the New England Patriots in overtime of the AFC Championship Game.
2. The Texans overcame a 17-3 first-half deficit to defeat the Chiefs at Arrowhead Stadium in Week 6, 31-24. Carlos Hyde led the way for the Texans offensively, rushing for 116 yards.
3. Between Philadelphia and Kansas City, Andy Reid has a 12-14 postseason record.
4. DeAndre Hopkins has averaged just 65.6 yards per game in five career postseason games. Deshaun Watson will likely look to get Hopkins, who had six catches for 90 yards in the Wild Card Round, involved early.
5. LeSean McCoy has 10,606 career rushing yards, which is good for 25th in NFL history and third among active running backs. The 31-year-old, however, has never won a postseason game.

While betting on Andy Reid teams in January hasn't always been a sound strategy, betting on his teams coming off of a bye has been about the safest bet in sports over the last two decades. Steve Spagnuolo's defense was excellent in the final six games of the season, and when paired with Patrick Mahomes and arguably the best home-field advantage in the NFL, the Chiefs will win comfortably, 35-24. 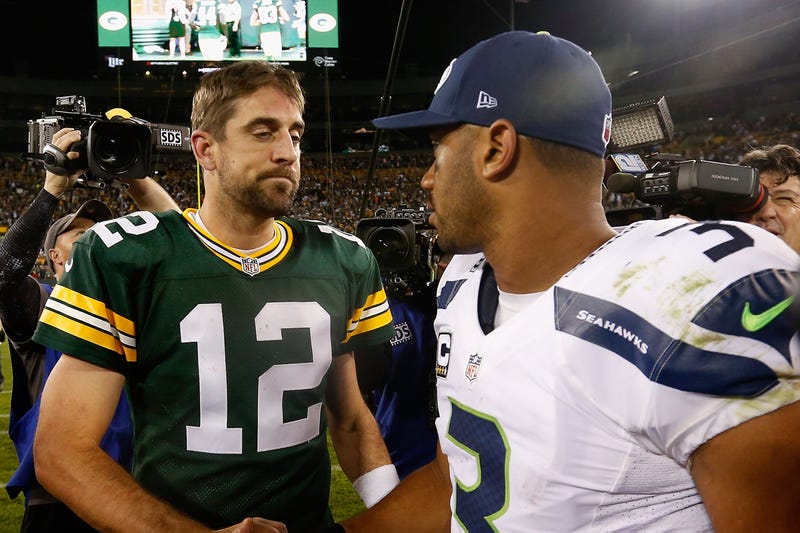 1. Aaron Rodgers has a 9-7 record in 16 career postseason starts. Sunday, he'll be making his first postseason start since the 2016-17 NFC Championship Game, when the Packers were blown out by the Atlanta Falcons, 44-21.
2. Russell Wilson has won nine of his 14 career postseason starts. The Seahawks are 3-4 on the road in postseason games in the Wilson era.
3. Wilson's Seahawks stormed back from a 16-0 halftime deficit in the NFC Championship Game in January of 2016, ultimately winning 28-22 over Rodgers' Packers. That game has little to do with this one, though. The Packers' leading rusher in that game was Eddie Lacy, and they were coached by new Dallas Cowboys' head coach Mike McCarthy. The Seahawks' leading receiver was the now-retired Doug Baldwin, and the "Legion of Boom" was still intact.
4. In their Wild Card Weekend win over the Philadelphia Eagles, the Seahawks averaged just 2.5 yards per carry on the ground, with Wilson serving as the team's leading rusher. Travis Homer and Marshawn Lynch combined for just 19 rushing yards on 18 carries.
5. The Packers went 5-0 during the regular season in games where Aaron Jones ran for more than 100 yards.

For whatever legitimate concerns the Packers' Week 17 win over the Detroit Lions left you with, the Seahawks just don't have enough around Russell Wilson to make a deep playoff run. The Packers, in Matt LaFleur's first postseason game as a head coach, will lean on Aaron Jones and get enough throws from Aaron Rodgers to edge out the Seahawks, 20-14.