Don’t let Tom Brady’s deal with the devil fool you—football is a young man’s game. The NFL’s youth movement is upon us with this year’s batch of rookies—most of them from LSU—blossoming before our eyes. When the ancient Brady inevitably vacates his GOAT throne in Tampa—presumably sometime in the next decade—he’ll be leaving the sport in capable hands with readymade stars Joe Burrow and Justin Herbert well-equipped to propel the league forward.

Not every rookie class measures up and obviously our judgment of this year’s crop is limited by a minute, seven-game sample size, but the early returns have been promising with the highly-touted likes of Clyde Edwards-Helaire and Justin Jefferson—and even a few non-LSU alums—each living up to their immense hype. We’re still waiting to see how others including scarcely-used Henry Ruggs (the recipient of a meager 14 targets) and MIA Eagles receiver Jalen Reagor pan out. The jury is also still out on Tua Tagovailoa, who is ready to take the mantle as Dolphins starter Sunday against Los Angeles, much to the chagrin of chronically underappreciated veteran Ryan Fitzpatrick. But from the looks of it, this year’s rookie ensemble could be one of the deepest we’ve seen.

Put your feet up and stay awhile for the unveiling of my top 10 NFL rookies with apologies to the “close but no cigar” trio of Brandon Aiyuk, D’Andre Swift and Laviska Shenault, who just missed the cut. Maybe next time, fellas. 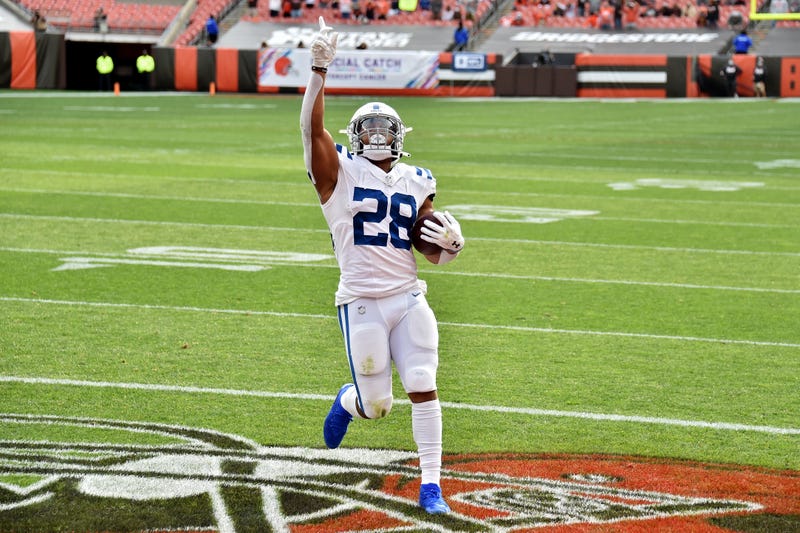 Like most of you, I was enamored with Taylor coming out of Wisconsin. A three-time All-American and the sixth-leading rusher in FBS history (though incredibly only second in school history behind ex-Heisman winner Ron Dayne), the 5’10,” 226-pound Taylor drew glowing pre-draft comparisons to Saquon Barkley and Ezekiel Elliott, among others. The second-rounder appeared headed for a rookie-year timeshare with Marlon Mack, but was soon recast as the RB1 after Mack was lost to a season-ending ACL tear. Taylor’s first six games have been a mixed bag—he’s averaged a modest 4.1 yards per carry, a relative disappointment considering the strength of Indy’s stout line. But he was heating up before the bye (4.9 yards per attempt with 189 yards from scrimmage over his last two games) and has shown surprisingly well as a receiver out of the backfield (16-161-0 on 17 targets), a facet of his game that was never fully explored at Wisconsin. Ball security was Taylor’s Achilles' heel throughout college, though he’s made significant strides in that area, largely eradicating the fumble woes that plagued him in Madison (15 career lost fumbles). Taylor hasn’t had a knock-your-socks-off rookie year, but he’s well on his way to becoming a productive NFL workhorse.

This could have gone any number of ways for Gibson, a converted wide receiver transitioning into a bell-cow role in Washington’s post-Adrian Peterson backfield. That’s a big ask for a player who logged all of 33 rushing attempts in college (backfield reps were hard to come by at Memphis with future NFLers Tony Pollard and Darrell Henderson atop the Tigers’ running-back chain of command), but so far Gibson has been up to the task, contributing a respectable 4.4 yards per carry with four touchdowns in his first seven games. A 6’2” steamroller who graded in the 83rd percentile of SPARQ athletes at the NFL Combine this past February, Gibson has all the physical tools to be an elite back. The talented 22-year-old delivered a breakthrough performance in Week 7, bullying the Cowboys for 128 rushing yards in a 25-3 Washington rout. Gibson may not be a finished product yet, but he’s well ahead of schedule in his development.

While Claypool has yet to carve out a high-volume role in a dense Pittsburgh receiving corps, Mapletron has made the most of his limited opportunities, turning 24 touches into 354 yards and six touchdowns (four receiving, two rushing) for the undefeated Steelers. A 6’4,” 238-pound goliath who bears a striking physical resemblance to Lions legend Calvin Johnson, Claypool defeated the Eagles almost singlehandedly in Week 5, bludgeoning the Steelers’ cross-state rival for four touchdowns in a 38-29 slugfest. He’s already getting the shadow treatment from opposing corners like Malcolm Butler, who spent his afternoon glued to the ascendant 22-year-old in Week 7. Consistency has eluded Claypool to this point—his outcomes have ranged from 116 to -2 yards—but the play-making Notre Dame alum still boasts an extraordinarily high ceiling. With impending free agent JuJu Smith-Schuster seemingly on the way out, Claypool should be Pittsburgh’s alpha receiver soon enough. 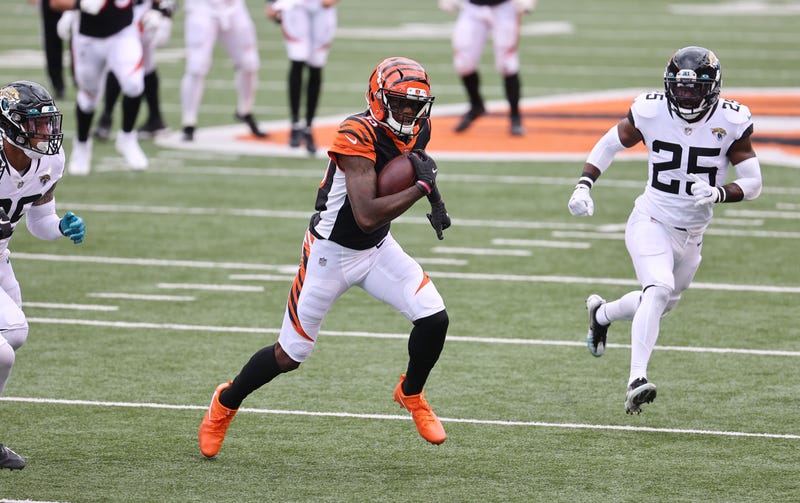 Higgins may have cost himself a first-round selection (and an extra year tacked on to his rookie contract) by sitting out the Combine in February, seeking a reprieve after Clemson’s exhausting postseason run, which concluded, ironically enough, with a National Championship loss to his new Bengals teammate Joe Burrow and undefeated LSU. Many comped Higgins to A.J. Green prior to the draft and, as fate would have it, the two now share a locker room together in Cincinnati. Donning the hallowed No. 85 worn by Bengals icon (and occasional RADIO.COM contributor) Chad Johnson, Higgins has run circles around Green in his debut season, especially of late, working the Tiger-to-Tiger connection with Burrow for 335 receiving yards over his last four contests. Entrenched opposite Green in three-wide sets with Tyler Boyd operating as Burrow’s security blanket in the slot, the 6’4” Higgins is quickly making his presence felt in Cincinnati where the Bengals, despite an ugly 1-5-1 record, are trending in the right direction.

A consensus All-American and two-time 1,000-yard receiver at Oklahoma, Lamb miraculously made it to the Cowboys with the 17th pick in April’s draft, inexplicably lasting longer than one-trick pony Henry Ruggs and his Alabama teammate Jerry Jeudy, now of the Denver Broncos. Lamb may not wow you with his burst off the line (4.50 forty) or have the build of a red-zone havoc-wreaker like Claypool, but his superior route-running and after-the-catch savvy are second to none. The former Sooner flashed immediate chemistry with Dak Prescott before the latter succumbed to a horrific ankle injury in Week 5, averaging a robust 86.6 yards per game in Dak’s starts. Even after last week’s goose egg in Washington, Lamb is still on pace for over 1,000 yards receiving, a threshold no Cowboys rookie has conquered since 1965. A versatile talent with impeccable ball skills, the crafty 21-year-old is here to stay.

Pronounced Edwards EEE-lair (as Steve Levy couldn’t stop reminding us on Monday Night Football), the Chiefs rookie has been as good as advertised, showing us why he was taken as the first running back in April’s draft by gathering 551 yards on the ground, second to only Derrick Henry among NFL ball-carriers. He’s arguably left meat on the bone as a pass-catcher, though the 21-year-old LSU alum still ranks sixth at his position in receiving yards with 194. CEH has weathered his share of clunkers—he tanked against the Chargers in Week 2 and was similarly unproductive in a loss to the Raiders three weeks later—but we’ve also seen his ceiling in victories over Buffalo (169 yards from scrimmage) and Houston (138 yards and a touchdown on 25 carries). Le’Veon Bell’s unexpected presence is a challenge he’ll have to navigate after having the backfield more or less to himself over the first six weeks, but the fiendishly elusive Edwards-Helaire has certainly shown promise in the early going. 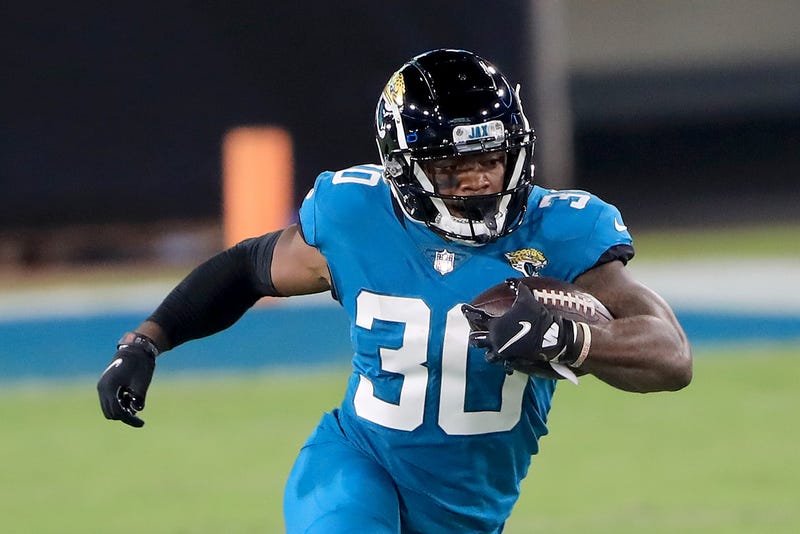 Undrafted out of FCS Illinois State, Robinson’s meteoric rise has been a bright spot in an otherwise dreary year for the 1-6 Jaguars, rumbling to 481 rushing yards while also flashing as a receiver with 27 grabs for an additional 225 yards. Robinson’s emergence in training camp made underachieving Leonard Fournette expendable, leading to his release in August. J-Rob won’t win the 100-meter gold in Tokyo next summer (he clocked a sluggish 4.64 at the Combine), but he hits the hole with authority, as demonstrated by his elite 4.5 yards per carry. And, in spite of Jacksonville’s continued offensive woes (25th out of 32 teams in yards per game), the 22-year-old has displayed a surprising nose for the end zone, punching in six touchdowns (four rushing, two receiving) in only seven appearances. There’s plenty of football left to be played, but if Robinson keeps this up, the 219-pound bruiser could approach Dominic Rhodes’ longstanding mark for most rushing yards by an undrafted rookie (1,104).

Jefferson went ballistic at LSU, leading FBS in catches last year while functioning as the Tigers’ primary slot receiver. Notably, he obliterated Oklahoma in the semifinals, ascending to national prominence with 227 yards and four touchdowns in a 63-28 LSU romp. The learning curve can be a steep one for players making the leap from college to the pros, but you’d never know the difference watching Jefferson, who has made a seamless transition from the SEC to the NFC North, already ranking among the NFL’s top ten in both receiving yards per game (sixth, 89.5) and yards per catch (fifth, 19.2). Jefferson has been sweltering hot over his last four games, eclipsing the century mark in yards three times during that span. The 1-5 Vikings aren’t anyone’s idea of a good football team right now, but at least with Jefferson, they’re becoming a fun watch on Sundays.

Herbert was an admittedly tough prospect to gauge coming out of Oregon. Despite sharing obvious traits with the similarly mobile, rocket-armed likes of Carson Wentz and Josh Allen, Herbert never quite put it all together in Eugene, enduring a maddening, Jekyll and Hyde existence over his four-year, Pac-12 tenure. Many perceived the toolsy but unmistakably raw Herbert as a multi-year project with all the familiar trappings of a boom-or-bust quarterback prospect. In Los Angeles, Herbert was expected to have the built-in safety net of a redshirt year, allowing him to spend his 2020 campaign soaking up knowledge from temporary bridge starter Tyrod Taylor. Instead, a pain injection gone awry led to Herbert’s baptism by fire in Week 2 (has any quarterback had worse luck than Taylor in recent years?) and, surprisingly, the 6’6” rookie has never looked back. Herbert hasn’t missed a beat since his sooner-than-anticipated insertion into the Chargers’ starting lineup, averaging a prodigious 308.4 passing yards per game while also achieving success on the ground with 121 yards and a pair of rushing scores. The polar opposite of Taylor, a conservative game manager who rarely goes off script, Herbert has enlivened the Bolts’ passing game, stretching the field with downfield prodigies Mike Williams and Jalen Guyton while also feeding possession receiver Keenan Allen early and often. Recently named the league’s Offensive Rookie of the Month, Herbert has masterfully filled the void left by free-agent casualty Philip Rivers. In a city of stars, the reigning Rose Bowl MVP has a chance to be one of the greats. 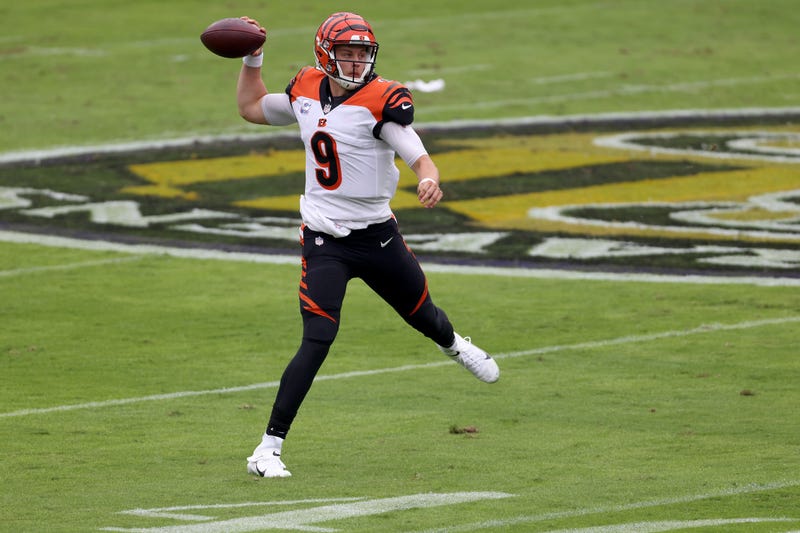 The crown jewel of this year’s 2020 draft class, Burrow has more than lived up to his Heisman billing in year one of his Cincinnati reign, returning the long-suffering Bengals to relevance (all but one of their losses has come by a single score) with his patented brand of tight-window precision, Serengeti survival instincts and remarkable penchant for downfield heroics. Third to only Matt Ryan and Deshaun Watson in passing yards, the prolific Burrow has cleared the 300-yard passing plateau in five of his last six showings including a career game in Sunday’s shootout with Cleveland (406 passing yards, 74.5 completion percentage, four total touchdowns). As polished and technically proficient as any rookie in recent memory, Burrow has all the qualities of a generation-defining megastar. College success doesn’t always translate to the next level (for proof of this phenomenon, look no further than first-rounder-turned-journeyman Josh Rosen, now a forgotten Bucs practice-squadder), but Burrow might be the rare talent that actually exceeds his through-the-roof expectations.