As Deshaun Watson enters training camp with the Houston Texans, there is still much speculation on the quarterback’s future and 2021 season.

Watson is facing 22 civil lawsuits alleging sexual misconduct with massage therapists while the NFL is also investigating these claims.

There has been some questions recently about where the NFL stands in its investigation, so the league released a statement on Tuesday reaffirming that its “review of the serious allegations against Deshaun Watson remains ongoing and active.”

“We are working cooperatively with the Houston Police Department and ensuring that the NFL’s inquiry does not interfere with their investigation,” it continued. “As we continue to gather additional information and monitor law enforcement developments, we will make appropriate decisions consistent with the Collective Bargaining Agreement and the Personal Conduct Policy.

“At this time, there are no restriction on Watson’s participation in club activities.”

NFL Network’s Tom Pelissero, who tweeted out the statement, added that the NFL has yet to speak to many of the civil plaintiffs or third parties who may have relevant info. He also added that because the police are still investigating, the league has not had access to evidence yet.

The NFL hasn’t been given access to speak to many of the civil plaintiffs or to third parties who may have relevant info, I’m told. Police still investigating, so no access to evidence yet. And league investigators haven’t spoken to Watson — usually the last step in their process

The league has also not spoke to Watson, but that is typically one of the last steps in the process.

Pelissero also provided the language of the NFL’s personal conduct police on use of the commissioner’s exempt list, which outlines a player must be charged with a crime or the league must have evidence that a violation occurred.

Here’s the language from the personal conduct policy on use of the commissioner’s exempt list (paid leave). The NFL isn’t using it here as of now. pic.twitter.com/07oFGUuozP

Watson’s future remains murky. The Texans are willing to listen to trade offers — reportedly asking for a high price of three first-round picks — but teams may be reluctant to deal for Watson amid these lawsuits.

While Watson has not been charged with a crime, his attorney told ESPN on Monday that there have been 10 complaints filed to Houston police about Watson. 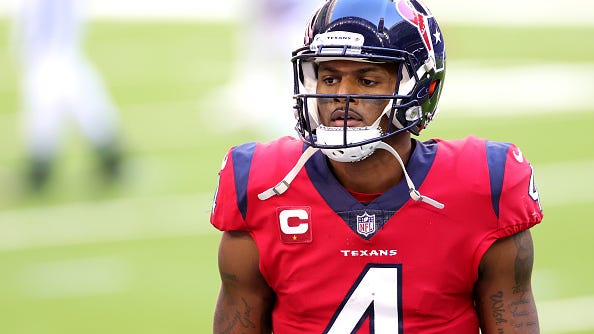