I grew up with two older sisters and a single mom, but instead of playing with dolls and wearing lace dresses I somehow became the kind of rabid sports fan that screams at the TV, the kind of hip-hop fan that speaks in song lyrics and the person who packs for a trip and brings more sneakers than outfits.

This is a roundabout way of saying that ever since I was a little tyke following my older sister around like a shadow, I’ve loved hip-hop culture and the NFL. To be specific, I’ve loved the Dallas Cowboys. I know it seems strange for a girl growing up in Portland, Oregon to become a stan for America’s Team, but when you grow up in a state without a pro football team? You gravitate to flash things like silver and blue and big-ass stars, especially when that’s your big sister’s team.

And now that I’ve been in sports media for 10 years, interviewed hundreds of pro football players and covered four Super Bowls, football is as much a part of my life as breathing the crisp fall air. Or now that I live on the East Coast, breathing the thick and sticky hurricane air.

So, in the spirit of starting a blog series on my top takeaways from every NFL Sunday, I thought I would incorporate the hottest album of the year (Drake’s Certified Lover Boy) to get into each of this week’s big storylines.

Papi’s Home: Dak is Back 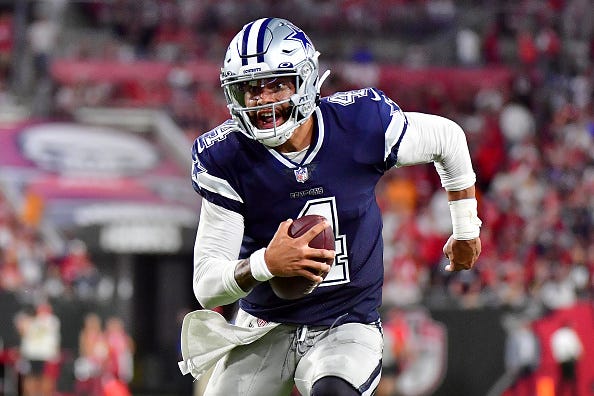 Remember all those people arguing whether the Cowboys should’ve given Dak Prescott the bag? The people who said Dak couldn’t make the type of throws that elite QBs in the league could? That a year after a horrific leg injury, a shoulder injury and no preseason action, he would fail on the big stage?

LOL he just served all the haters a big steaming cup of STFU. That man just lit up a Super Bowl champion defense like a roman candle.

He put up ungodly numbers and it was clear that after the plethora of dog shit quarterbacks that Jerry trotted out last year, we Cowboy fans (and truthfully any football fan with a pair of working eyes) know that “Papi is home.”

Stats? 400 yards and 3 TDs in 58 passes. His throws? Darts in tight windows. He was never rattled. He was cool as a cucumber in a Frigidaire. He even took off a few times to get out of pressure in his first start since OCTOBER 2020. Are you kidding me? 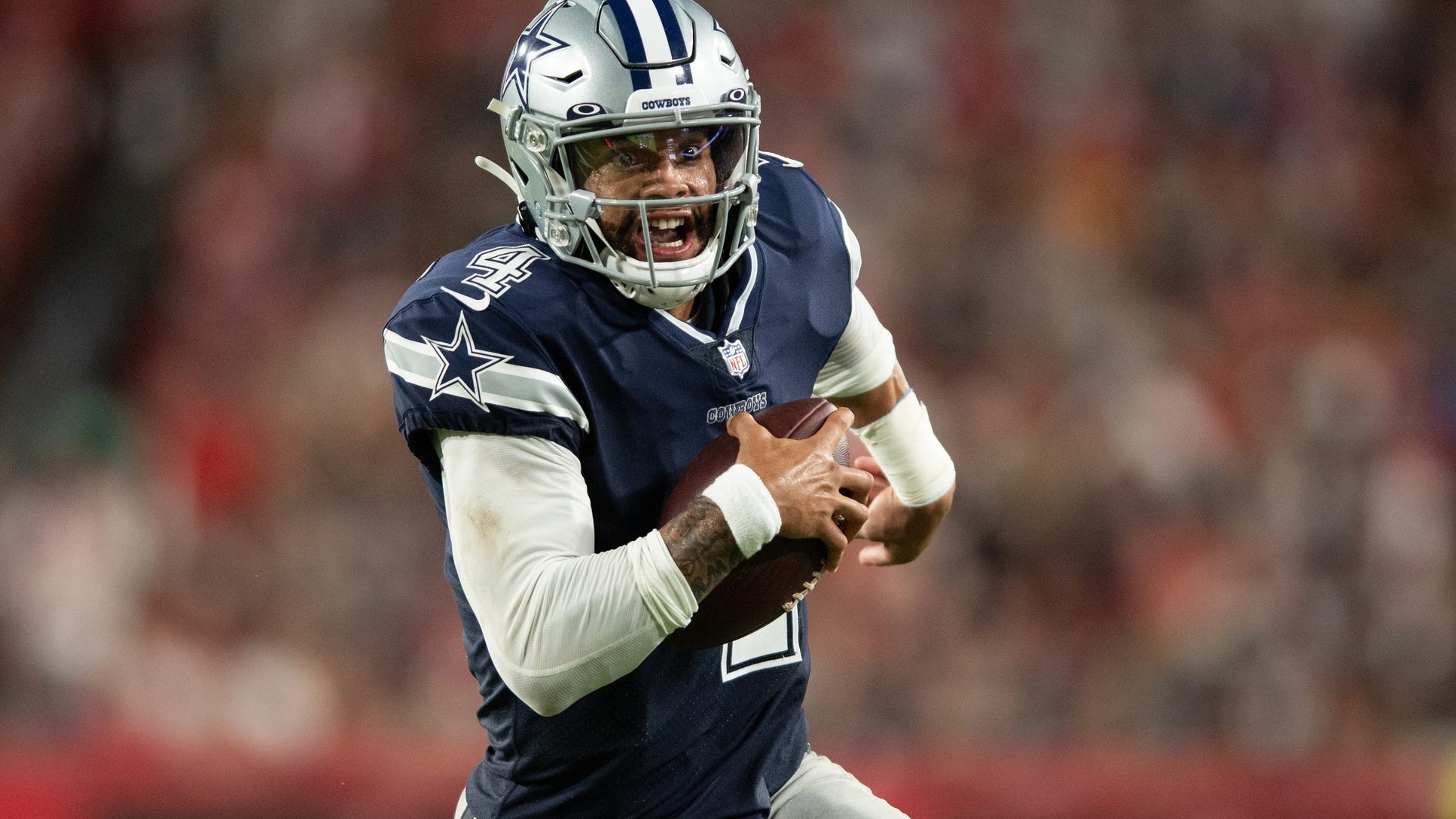 DADDY is home and it looks like Dallas just might be better than we thought. If it weren’t for Greg “The Broken Leg” Zuerlein’s multiple botched kicks, or hell, the badly missed offensive pass interference call on Chris Godwin, Dallas would have beaten the defending champs on their turf. On ring night. It's no longer taking the NFC East that’s in reach, this team could actually go deep into the playoffs.

As a Cowboys fan, after last year, if that doesn’t give you some excitement, go see a doctor. 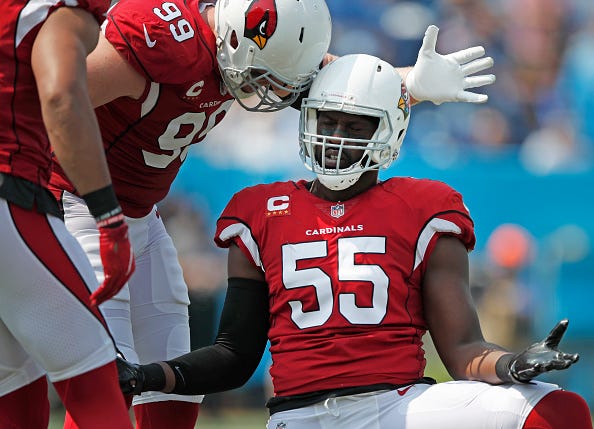 Maybe Drake should have replaced Kawhi in his video of Way 2 Sexy with Chandler Jones, because damnnnn that man was on FIRE Sunday. FIVE SACKS. In a game for the ages, Jones also had four more tackles for losses. He led an Arizona defense that was so good nearly a quarter of all Titans plays ended up losing yards. Chandler spent more time in the Titans backfield than Derrick Henry and spent more time with his arms around Ryan Tannehill than Ryan’s wife, Lauren.

And now the Cards will be everyone’s sexy pick out West. Kyler Murray threw four TDs, both running backs had over 50 yards, and four receivers had 43 or more yards. That offense has more balance than Simone Biles.

And if they keep playing okay, alright, that's fine, okay, the rest of the league’s getting put on notice.

The Remorse: Aaron Rodgers Gets Revenge on the Wrong Team 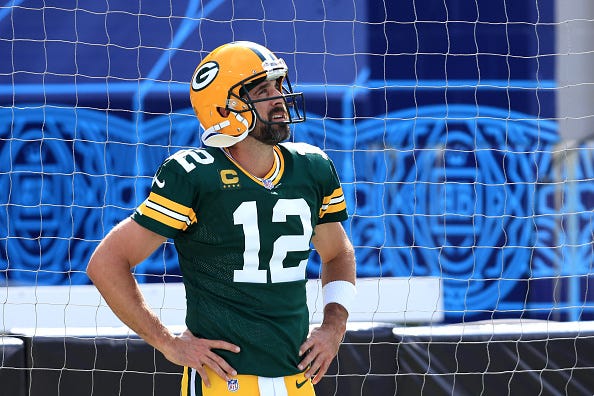 “No mercy for what we are doing. No thought to even what we have done
We don't need to feel the sorrow. No remorse for the helpless one. War without end”

When you read these lyrics do you immediately think of the Packer organization in regards to how they’ve treated Aaron Rodgers throughout his career? I know I do. Things have gotten to the point where Aaron is doing his best Drake impression like “I might come, I might go, I don’t know.”

Forgive me for thinking Aaron Rodgers is going to make the Packers feel some sort of remorse before he bolts in free agency this summer. Rodgers told Erin Andrews that he didn’t want to cause any distractions, but if anyone looked distracted this week, it was last year’s MV