Was Drew Brees actually leaving the door open to return to the NFL?

One of the league’s top insiders says no.

Brees and NBC reportedly are parting ways after the longtime quarterback spent one season as the analyst at the network. He seemed displeased with the news getting out, firing off a tweet that at some points came off as miffed, but sarcastic at others.

Despite speculation from media about my future this fall, I’m currently undecided. I may work for NBC, I may play football again, I may focus on business and philanthropy, I may train for the pickleball tour, senior golf tour, coach my kids or all of the above. I’ll let you know

The most noteworthy part, obviously, came when Brees wrote, “I may play football again.” At 43 with one year already away from the game, that seems unlikely, and NFL Media’s Ian Rapoport explained on the “Pat McAfee Show” why he thinks Brees made that remark.

"My read on this thing: He’s not playing again. Dennis Allen kind of came out and said it, but knowing what would get our attention and get the retweets, (Brees) mentioned that,” Rapoport floated, pointing out how media savvy Brees is. “He’s not playing again. … I’m sure we’ll see him again, just not on the field.”

This has been a chaotic offseason on the quarterback market, and Brees unretiring would only add to the series of head-turning moves.

However, it doesn’t appear we should bank on that. 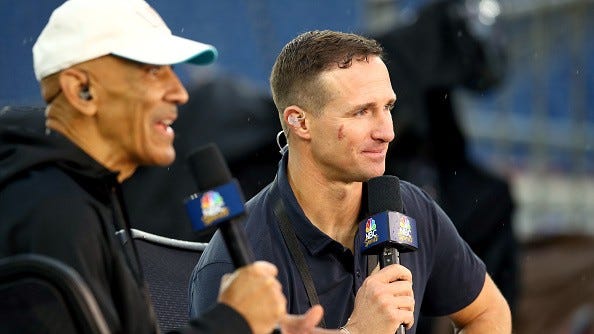 Drew Brees reportedly out at NBC after one year