Five NFL head coaches, including San Francisco's Kyle Shanahan and New Orleans' Sean Payton, were slapped with hefty fines after they violated the NFL's strict mask policies on the sidelines of their Week 2 games. 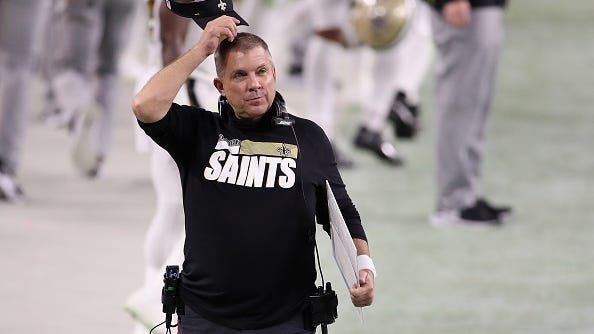 And while all of the coaches are appealing their punishments in an attempt to salvage their individual $100,000 fines -- along with their teams' $250,000 fines -- the NFL is taking the next step to dissuade similar behavior from occurring in the coming weeks.

According to ESPN's Adam Schefter, the next teams that violate the league's game-day protocols are at risk of losing more than just money.

NFL sent another strongly-worded memo to team executives, GMs and HCs today, urging all to be in compliance with game-day protocols (wearing masks). “We will address lack of compliance with accountability measures that may include...suspensions and/or forfeiture of draft picks.”

Amid a coronavirus outbreak within the Tennessee Titans organization that has resulted in four players and even more personnel members testing positive, along with the postponement of the Steelers-Titans Week 4 game, it comes as no surprise that the league is exacting more stringent guidelines moving ahead.

While it's understandable that coaches could struggle to make the adjustment to wear masks, as Sean Payton and other have alluded to, there are workarounds. Andy Reid's face shield, while not the most visually appealing option, sure seems to do the trick. Green Bay's Matt LaFleur reportedly has an assistant coach who watches him to make sure he doesn't keep his mask down. The latter reminds me of Sean McVay's assistant coach that helped him to stay in place.

As the game plays on, Sean McVay and his "Get Back Coach" tango on the sideline.
Expect more of this at #SBLIII 😂@RamsNFL #NFLFilmsPresents: Get Back Coach airs this Tuesday at 6pm ET on @FS1! pic.twitter.com/5FMyWH4gzT

When money, draft picks, suspensions and, most importantly, the health and safety of the NFL community are all on the line, any strategy is one worth pursuing.