Rick Dennison, an NFL coach since 1995 and the Vikings offensive line coach and run game coordinator for the past two seasons, has reportedly parted ways with the team, and it's all because of the COVID-19 vaccine.

According to Courtney Cronin of ESPN, Dennison refused to receive a vaccine and is now out as the Vikings assistant coach. He is believed to be the first NFL position coach that left a team because of the league's vaccine protocols. Phil Rauscher, formerly the assistant offensive line coach, has been moved up to fill Dennison's spot, while former Auburn special teams analyst Ben Steele will take Rauscher's place as assistant.

Dennison is believed to be the first NFL position coach to part ways with his team after choosing not to receive a vaccine. https://t.co/W2EOe9AZnu

According to league rules, the vaccine is a requirement for all Tier 1 staff, which includes coaches, front-office executives, equipment managers and scouts. Unless a legitimate religious or medical reason against getting the vaccine is provided, all Tier 1 staff must abide by this rule or face losing Tier 1 status, which prevents them from being on the field, coming to meetings and having direct interactions with the players.

This comes the day after several players, including DeAndre Hopkins and Leonard Fournette, commented on the league's new COVID-19 vaccine policies, which informed teams that any game that is canceled due to a COVID-19 outbreak among unvaccinated players will result in a forfeit, a loss of pay and other possible disciplinary measures. Hopkins, Fournette and others revealed their opposition to getting the vaccines and even questioned their NFL futures based on the rules. 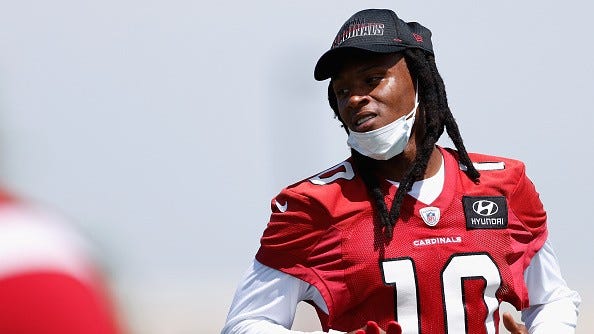 On Friday, NFL medical director Dr. Allen Sills said that "nearly all Tier 1 and Tier 2 team employees" had been vaccinated, while the number of players who have begun the vaccination process is now at 80 percent.

80% of all NFL players have at least one shot.