The most controversial selection of the first round of the 2020 NFL Draft came when the Green Bay Packers' selected former Utah State quarterback Jordan Love with the No. 26 overall pick. Not only did they use their first-round pick on a quarterback, but general manager Brian Gutekunst moved up four spots for the chance to select Love.

Of course, the Packers still employ Aaron Rodgers, a two-time NFL MVP and future Hall of Famer. Rodgers isn't coming off of a career season, but the 36-year-old did help the Packers to go 13-3 and reach the NFC Championship Game a season ago. It can be debated whether the Packers were actually as good as their regular season record indicated, but they were just one win away from reaching the Super Bowl in the first year under head coach Matt LaFleur. And rather than getting Rodgers a wide receiver in a draft full of exiting prospects, the Packers used their first-round pick on his potential successor and got richer at running back in the second round, selecting Boston College running back A.J. Dillon. Of course, the team already employs Aaron Jones, who has averaged 5.0 yards a carry in three NFL seasons.

Though we've heard hearsay and speculation about how Rodgers may feel about the team's surprising draft strategy, the two-time All-Pro finally broke his silence Friday afternoon, saying that he does believe the team has improved since last season and that he was initially caught off guard by the Love selection.

"My general reaction at first was surprised, like many people," Rodgers said in a conference call Friday. "Obviously, I'm not going to say that I was thrilled by the pick necessarily, but I understand that the organization is thinking not only about the present but about the future. And I respect that. I understand their focus and their mindset and obviously they thought that he was such a great talent that they needed to go up and get him. So, like I said, I was generally surprised, but it's what those guys are paid to do, to put together a roster for now and for the future as well."

The Packers hadn't selected an offensive player in the first round that wasn't a lineman since they drafted Rodgers all the way back in 2005. Rodgers has a legitimate No. 1 wideout in Davante Adams and an exciting deep threat in Marquez Valdes-Scantling, but the team doesn't have the depth of pass-catching options that most Super Bowl contenders do. Not only did the Packers not use their first-round pick on a wide receiver, but none of their nine picks were made on a wideout. 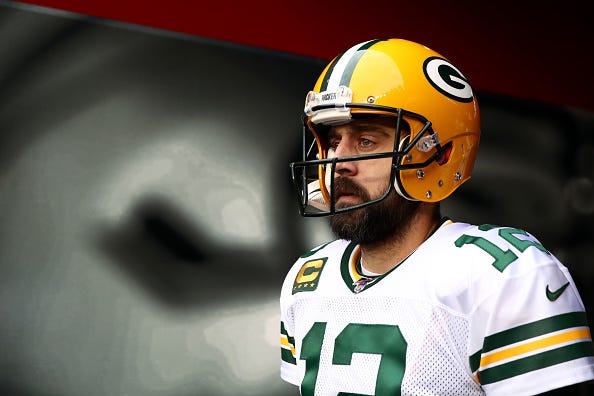 However, while Rodgers may have liked the Packers to go in a different direction with their first-round pick (and maybe some others), the 15-year NFL vet says that he expects to have a strong relationship with Love.

"It's the same that I've done with all of my backup quarterbacks, and I feel great about those relationships that I've developed over the years," Rodgers noted. "Many of them are still really close friends. I consider Matt Flynn a very close friend. I still have great contact with a lot of guys that I've played with over the years, from more recent guys like DeShone (Kizer)...Brett Hundley and I keep in touch all the time...Scotty Tolzien and I talk from time to time. So I've had great relationships over the years with those guys and expect to have the same type of relationship with Jordan.

"He [Love] didn't ask to get drafted by the Packers. He's not to blame at all. He's just coming in, excited about his opportunity and we had a great conversation the day after the draft and I'm excited to work with him. He seems like a really good kid with a good head on his shoulders."

Once upon a time, Rodgers was drafted in the first round to eventually succeed a future Hall of Famer - Brett Favre. The circumstances weren't exactly the same, but Favre ended up finishing his career elsewhere, playing for the New York Jets and Minnesota Vikings before retiring. Favre predicted earlier this month that Rodgers won't finish his career in Green Bay. There isn't an out in Rodgers' contract until after the 2021 season, but theoretically he will want to continue playing at that point. Does that mean he won't spend his entire career in Green Bay?

"I think what it does is just reinforce the adage that you can only control what you can control. It's always been a mantra for myself - and I think any athlete - that there's things that are just out of our control. That [spending his entire career in Green Bay] is something that is very important to me, but that is truly something at this point that is out of my control. What I can control is how I play, and making that decision at some point a very hard one. If I were to retire on the organization's timetable, then it's an easy decision. But if there comes a time where I still feel like I can play at a high level and my body feels great, then there's other guys who have gone on and played elsewhere." 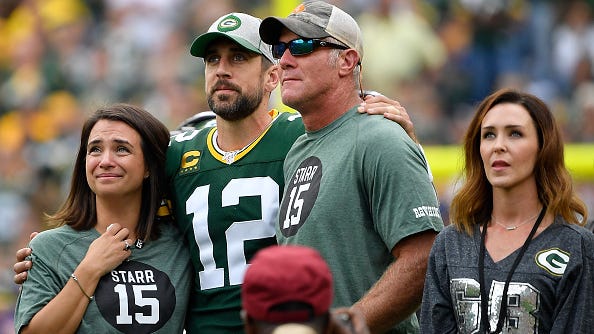