The timing of the news that Aaron Rodgers wanted out of Green Bay was awfully peculiar, as it came just hours before the first round of the NFL Draft.

There was a report last Thursday morning that the 49ers had offered a trade for Rodgers, which the Packers refuted.

But shortly later, ESPN’s Adam Schefter reported that the reigning MVP was so disgruntled that he did not want to return to the Packers. 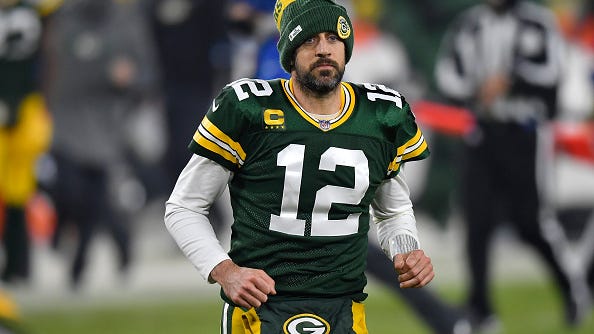 Aaron Rodgers reportedly disgruntled with Packers, no longer wants to play for team

The story dominated the NFL Draft and Rodgers’ future is still the hot topic across the NFL this week. It also had some asking the question: did Rodgers leak this before the draft on purpose?

According to Schefter, there was no leak from either side.

“This was an accumulation all during the offseason, listening to people talk and observing,” Schefter said on “The Dan Patrick Show.” “If we go back to the NFC Championship Game, did we not hear Aaron Rodgers after that game talk about his level of unhappiness? [Of] uncertainty for the future? Just go back and listen to that press conference and it sounds almost like he’s saying good bye to Green Bay. So, your antennae is up and throughout the course of the offseason there was rarely a week that went by where I didn’t hear something about Aaron Rodgers.”

DP: "You chose to break the [Rodgers] news on Draft Day?"

Schefter: "That is absolutely accurate, correct. It was nothing that morning that came in that all of a sudden said to me yeah he wants out, you should report this... It was just an accumulation of information". pic.twitter.com/SJEPv3ssLu

Schefter said that the report of the 49ers making a trade offer was false — they never made an offer — but that was what ultimately led him to decide on breaking the news.

“I said, ‘how long until it gets out that Aaron Rodgers wants out of Green Bay?’” Schefter asked. “Next week? When he doesn’t show up to OTAs? Next month? What does it matter if it comes out now or next week or next month?”

Patrick, to be sure he was understanding Schefter correctly, asked “so you chose to break the news on draft day?”

He continued: “And there was nothing that morning that came in where someone said to me he wants out, you should report this. It was going on all offseason and there was more and more talk. And now there’s starting to be Aaron Rodgers talk and you know, this isn’t going to wait much longer and it just happened to be draft day."

Whatever Schefter's reasons were for breaking the story at that time, the ones who seemed to benefit the most were ESPN and the NFL.

It was the third-most watched draft ever, and the Rodgers news certainly drummed up more interest, for whatever it is worth.

“People can believe whatever they want to believe," Schefter said. "It was just an accumulation of information across the entire offseason.”