On a crucial third-and-goal play late in the first half, Jameis Winston did what all great quarterbacks do and took advantage of a free play and gave his wide receiver a chance at a jump ball.

The only issue? He didn't actually know there was a penalty that would've negated any negative result. When he lobbed the ball into the back of the end zone as he was taken to the ground by the defense, a ball that Marquez Callaway went up and snared for a 14-0 lead, he was actually trying to throw the ball away.

"That was all God," Winston said when asked about the play after the game. "I was trying to throw that ball away. Marquez went up there and snatched it. So, touchdown good guys."

While the ultimate result was positive and proved to be the winning margin in the 28-13 victory over the Patriots, the process certainly didn't leave coach Sean Payton overjoyed on the sidelines. Cameras caught the coach's unamused greeting for quarterback as he returned to the sidelines following the scoring drive.

Payton described the play as a "hold-your-breath" moment, even with a flag on the field for a penalty on the Patriots. The coach's message to his QB, as relayed by Winston: "If you're throwing it away, throw it away."

The moment allowed many to seize on a reputation for ill-advised passes that haunted many of Winston's otherwise highly productive seasons with the Tampa Bay Buccaneers. Thus far Winston has thrown only two interceptions, both in a Week 2 loss to the Panthers, but he's had his share of head-scratching decisions to belie his common refrain about focusing on decisions and protecting the ball. 3 takeaways from Saints’ win over Patriots: A title-caliber defense has entered the chat

Either way, it was a result to be pleased with before a much-awaited return home to New Orleans for the first time since the team evacuated ahead of Hurricane Ida. And with that in mind, Winston smiled as he shared his reply to his coach after the dangerous but admittedly productive heave for Callaway's first career touchdown. 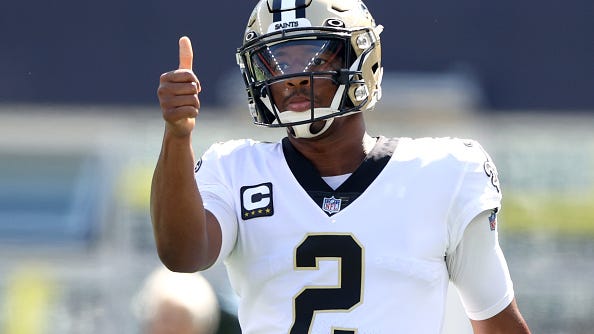