When the Winnipeg Jets relocated to Arizona in 1996 and became the Phoenix Coyotes, the team adopted the "Kachina" look with their logos and jerseys that became famous with many in the hockey world. The team embraced the look from the start, wearing its Kachina themed jerseys all the way through the 2002-03 season. 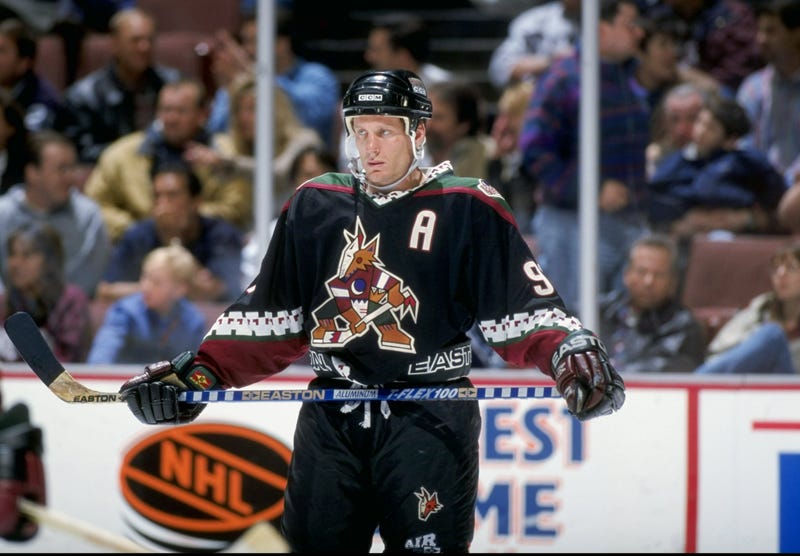 Ahead of the 2003-04 season, the organization underwent a re-branding process, with the team altering its primary colors and choosing to go with a more modern look, otherwise known as their "Howling Coyotes" logo.

In 2018, the team brought back the black Kachina jersey as a third jersey, sporting the look from years past at select home games at Gila River Arena in Glendale. In 2020, the team introduced a new-look uniform as part of the league's "Reverse Retro" line of jerseys that was a spin off their alternate uniforms worn from 1998 to 2003.

After much demand from Coyotes fans and other enthusiasts around the NHL for years, the team announced on Monday the Kachina look is returning on a full-time basis in the desert.

The Coyotes formally announced the decision with the unveiling of their new white road uniforms with the Kachina coyote on the crest. The uniform looks nearly identical to the one the Coyotes sported as their home jerseys in the mid-to-late '90s and early '00s.

According to the team, the red "Howling Coyote" look will remain as an alternate/third jersey for eight games this upcoming season. However, the jerseys will be phased out at season's end.

Kachina is the new primary logo, crescent-moon is the secondary logo, the "Howling Coyote" logo has been removed completely from the set.

It's the third major logo change by the #Coyotes since moving from Winnipeg in 1996.

"Embracing the Kachina was an easy decision for us, and we are very proud to have one of the best logos and uniforms in the entire NHL," said Coyotes President and CEO Xavier A. Gutierrez, via The Arizona Republic.

"It's not just a logo, it's a real transformation of saying this is what we stand for, this is what we're about, and how we're going to reflect that is in a number of areas."

The Kachina look has gotten plenty of mixed reviews over the last several years. Some believe it is just a weird design and one of the ugliest looking jerseys/logos in all of sports. However, many love the classic appearance, and have even considered the Kachina jersey/logo one of the best and most unique looking concepts.

Despite all the turmoil that has surrounded the Coyotes franchise over the last several years, plus the uncertain future with the team in Arizona, this was a slam dunk decision for the organization.

The Coyotes will open their 2021-22 season on Thursday, Oct. 14 in Columbus, Ohio against the Blue Jackets at Nationwide Arena. The team says it will wear their white Kachina jerseys for their home opener on Monday, Oct. 18 against the St. Louis Blues.

Be sure to check out Chris Creamer's breakdown of the return to Kachina available at his website, SportsLogos.net.