LeBron James has emerged as the front runner for NBA Most Valuable Player this season. James is the betting favorite at +125 at FanDuel Sportsbook to win his fifth MVP award, first since 2013.

However, there is a lot of basketball to be played and several players are putting together strong seasons in addition to the Lakers forward.

Can anyone catch LBJ? With Anthony Davis out for the next few weeks due to a calf strain, a door could open for someone to dethrone ‘King James’ if the Lakers’ overall play slips.

Here are the odds as of February 20th: 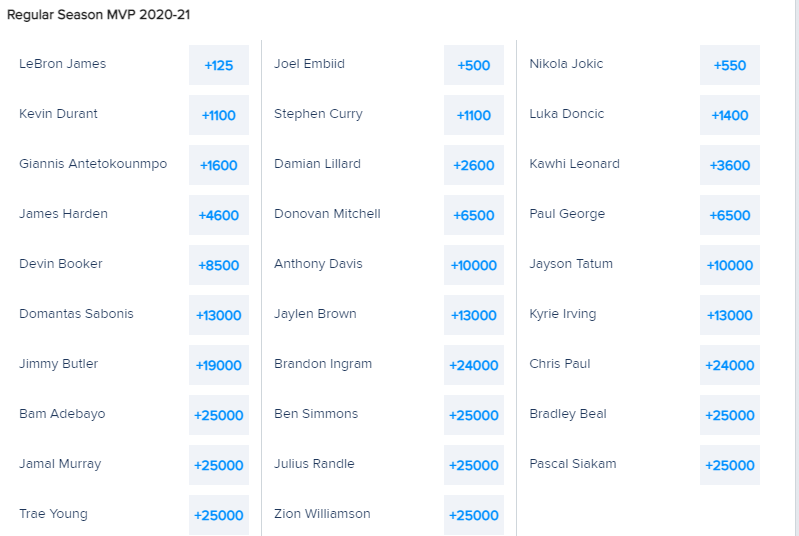 MVP Odds as of 2-20, per FanDuel Sportsbook

When you take a look at Embiid's statline for this season, you do a double take. He is averaging 30 points and 11 rebounds on the year while shooting 54% from the field, 39% from deep, and 85% from the free throw line.

Philadelphia is 11 points better with Embiid on the floor this season and the team has the best record in the Eastern Conference. Further, the Sixers are 19-5 with Embiid plays and 1-5 when he is inactive.

While they are leading the East, the Sixers have the fourth best record in the league, behind LeBron and the Lakers, hurting Embiid’s case.

The big fella is the clear No. 2 choice this season. He scored an eye-popping 50 points against the Bulls on Friday, and he's going to need big efforts like that to push past James.

For now, though, LeBron has the narrative over Embiid.

There would probably need to be a noticeable gap between Philly’s record and the Lakers to warrant Embiid being voted over LeBron. But the Sixers' big man is certainly in the conversation.

It seems like night after night Lillard is providing late-game heroics to pull the Blazers out of trouble. Whether it is a 35 footer or a smooth and-one finish in the final 30 seconds for the win, Lillard is always making big plays.

DOES ANYONE HAVE THE TIME pic.twitter.com/6HdDUx4q6b

His numbers are very similar to last season, but if you look at the context of the team of late, it’s much more impressive. Portland has won six straight on Lillard’s back without key contributors C.J. McCollum and Jusuf Nurkic, climbing to the five seed in the competitive Western Conference.

The guard is averaging 30 points per game and nearly eight assists. If Lillard keeps this up he is going to enter this conversation for Most Valuable Player with his nightly efforts, but Portland is going to need some reinforcements.

The team has the third worst defensive rating in the league, per NBA.com. Despite the porous defense, Lillard’s ability to score at will has the Blazers in striking distance at the end of games, but is there a regression coming for this patchwork Blazer supporting cast?

If McCollum and Nurkic can return in the next week or two to help sustain the Blazers' footing in the West, Lillard is going to continue to hang around in the MVP race.

Typically, super teams don’t generate MVP’s, but Harden has a unique case building for him. At nearly 50-1, it may be worth betting a flier on him.

Even though he may have lost some equity with voters after forcing his way out of Houston, Harden has been fantastic since arriving in Brooklyn.

His usage rate has dipped well below his career average of 30% to 24%, but he has acclimated into his role as a point guard. This past week, with the Nets on a west coast road trip, Harden really showed his impact.

The Nets hit a franchise record 27 three’s on Monday in a blowout win over the Kings, 20 against the Suns in a comeback victory the following night, and 18 against the Lakers in an impressive win in Los Angeles. Many of those perimeter shots were generated off of Harden’s ability to get his teammate’s open looks, as seen by his league leading assist mark.

For Harden to win, he’d have to keep up this pace, maybe even get his rebounds into the double-digits for triple double averages. On top of that, the Nets will have to run away with the Eastern Conference, which they currently trail the Sixers by a game in the standings

It’s a stretch for Harden to win MVP, especially with the greatness of Kevin Durant and Kyrie Irving surrounding him, but the Nets are 11-1 against teams over .500. With Harden firing on all cylinders, he's worth a shot at 46-1.

Reed is a native of New Jersey and graduate of the University of Wisconsin-Madison. He is a die-hard Brooklyn Nets fan and always believes the spread has a chance of covering. You can follow Reed on Twitter @ReedWallach for more commentary.