During the NFL postseason, there are numerous ways to get involved in the futures market. If there is a team in each conference you like there are creative ways to bet it. At FanDuel Sportsbook, you can bet on the exact matchup of Super Bowl LV. 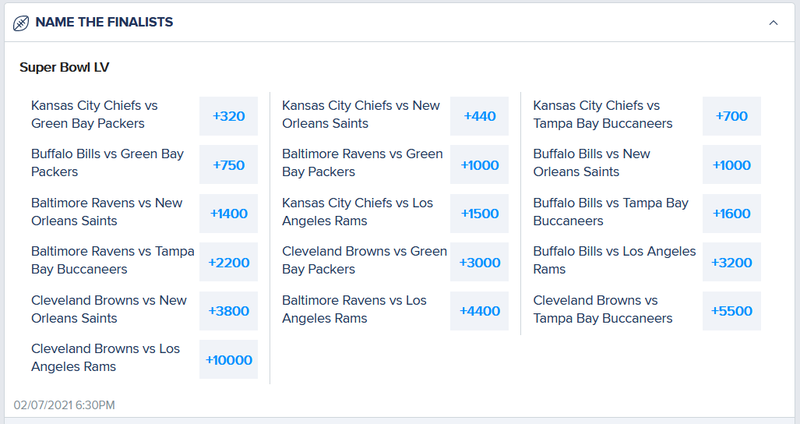 This is a unique way to bet on specific teams long-term rather than betting them week to week.

My recommendation when looking at this board is to key in on certain teams and try to find bigger payouts ,while also giving yourself room to possibly hedge or work around the bet to optimize the value of the ticket later on.

Briefly, the aforementioned prices on the Buccaneers show that there is value to be had here. If Tom Brady can get his team to the NFC Championship, these prices will all slice in half. There’s still time to get in on these numbers but when betting them, I would say try to make a road map for these futures and possible outs that can come up given the results this weekend.

Looking to bet the NFL Playoffs? The BetQL model picks the side and total of every NFL Playoff game. Sign up with BetQL today and become a better bettor!

Here are a few that are worth looking into further:

The two favorites. I know, it’s boring, but let me explain. If you were to parlay the four games including each team's game this weekend and then both conference title games, this is close to the expected price. If you think the home teams will prevail, but you want to get ahead of it and maybe scoop up some value along the way, then this is the bet to make.

Two teams with the “peaking” narrative.

Baltimore has now won six straight and Tampa Bay has won five in a row. The Bucs are getting a familiar foe in their NFC South rival the New Orleans Saints on the road this weekend before a potential matchup with Green Bay next Sunday, a team they disposed of earlier this season.

As I alluded to before, Tampa Bay is a team worth keying in on in this market as they are going to be small underdogs in two straight games, but have a path to winning both with a Hall of Fame quarterback and strong defense. The Bucs’ defense was able to sack Packers quarterback Aaron Rodgers four times in the Week 6 victory, and could have similar success in a second matchup with Green Bay down All-Pro lineman David Bakhtiari.

Baltimore, on the other hand, is in a similar position. A short underdog against Buffalo, the Ravens have the ingredients for a win against the Bills. Indianapolis proved that this Buffalo defense can be exploited, rushing for over five yards per carry. If not for some crucial mistakes, the Colts would have won that game outright.

Meanwhile, a rematch with Kansas City from earlier in the year is a daunting task on the road, but Baltimore’s defense is playing its best football right now. Its defensive line can make life uncomfortable for Patrick Mahomes and the Chiefs' pass happy attack. The Ravens’ defensive front is the best left in the AFC, and is top 10 in opponent passing success rate in the NFL, per SharpFootballStats.

With both teams currently red-hot, there is value at +2200 they will meet in the Super Bowl.

If you are looking for a dart throw, this could be it. The “defense wins championships” exacta.

We discussed the Ravens’ defense, so let's talk about the Rams. Los Angeles is playing a quarterback whose throwing hand is compromised with Jared Goff’s surgically repaired thumb, but the defense is humming.

L.A. showed that it can win games playing from ahead and by generating turnovers, which is going to be its path to success from here on out. All world DT Aaron Donald is expected to go on Sunday and he can wreak havoc in the backfield to make Aaron Rodgers uncomfortable. If the D can turn Green Bay over early and jump out to a lead, the Rams can focus on running the ball against a Packers defense that was 22nd in the league in opponent rushing success rate.

If they are able to survive the frozen tundra, the Rams will be up against either Tampa Bay or New Orleans. Both opponents would be tough for a Los Angeles team that is going to be very run-heavy this postseason. However, the Rams were able to beat the Bucs earlier this season, so the familiarity is there, not to mention a wave of momentum.

It’s a long shot, and priced accordingly, but the Rams do have the defense to make an unexpected Super Bowl run.