The charity round featuring a foursome of Tiger Woods, Phil Mickelson, Peyton Manning and Tom Brady was the most-watched combined golf broadcast in cable history, according to Golf Week. 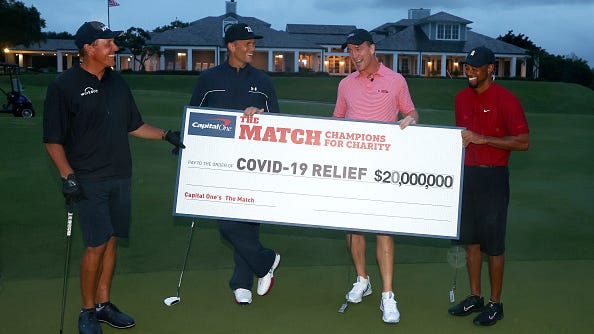 The telecast peaked at a whopping 6.3 million viewers in the 15-minute window leading up to 6 p.m. ET, the report said, and was broadcast on TNT, TBS, TruTV and HLN.

The outing raised $20 million for Covid-19 relief, while the tandem of Mickelson and Manning outdueled Woods and Brady.

But it was Brady who arguably stole the show. The former Pats quarterback, now with the Bucs, sunk a 100-yard approach shot from the fairway for birdie -- before splitting his pants.

The Match also received favorable coverage for its creative use of microphones, and the playful banter between the golfers and host Charles Barkley.